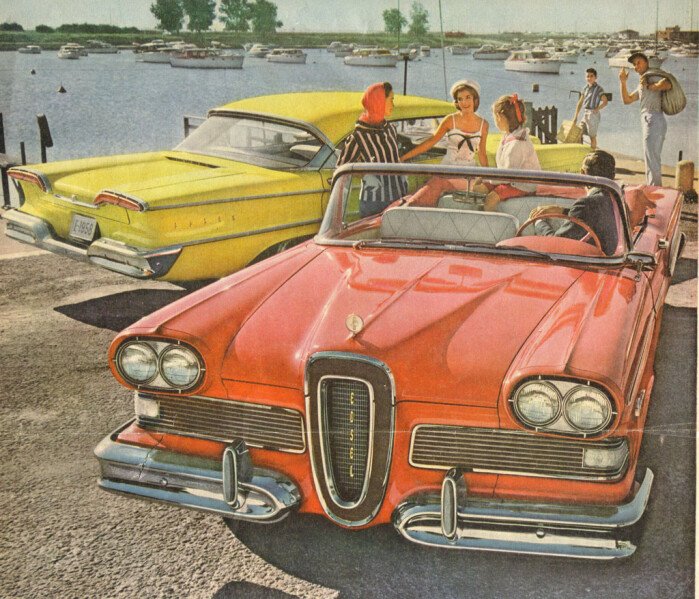 Styling for 1958 could be summed up in four words: “Give me more chrome.” One has to wonder if auto execs held stock in plating companies. And while nearly everyone added some chrome, it was General Motors who did it to excess.

Buick was perhaps the guiltiest party. You couldn’t look at the rear end of a Buick Limited without sunglasses. Below the tail lamps was a massive bumper nearly the size of a kitchen table. Their Limited models included no less than 15 chrome fins rested at a slight angle along the quarter panel. The front end was no better, having a grille with 160 square cabinet knob protrusions. It was a polisher’s nightmare.

Pontiac, fortunately, fared somewhat better. Stylists added chrome, but the results turned out to be attractive. Bonneville models had a beautiful rocket-like tube nested on the side cove of its quarter panels. Even their station wagon was pleasing to the eye.

GM’s new sheet metal was responsible for a heavier look to all divisions, but none more than Oldsmobile. All of last year’s sleekness was gone, replaced with tons of chrome and hard body lines.

Chevrolet was included in the heavier look at GM. The Impala became the top model and the only Chevy to have three tail lamps per side. Quad parking lamps floated in a cheese grater grille. All Impala models came with bold side trim, while hardtop models included a chrome scoop above the rear window.

The Cadillac Fleetwood 60 Series was so long it looked as though it needed its own zip code. Driving it was like driving your living room.

The Ford lineup got new front end and rear end styling. Quad headlamps and a cheese grater grille with a horizontal grille bar provided a totally new look. All models received an imitation hood scoop that most would agree did little for styling. Rear end styling doubled the number of tail lamps to four and, in doing so, eliminated the clean look of 1957. Clearly, it wasn’t one of Ford’s finest moments.

Ford’s big entry to the styling wars was the much-maligned Edsel. Its horse collar grille was enough to keep customers away in droves, although the rear end styling, particularly its long, thin tail lamps, were considered attractive.

The Thunderbird model was stretched, turning it into a four-seat personal sports car. Quad headlamps and a wide mouth grille-bumper combination were a totally new look. Stylists gave the roof a more formal look, with a wide “C” pillar. The all new interior included a new dash and wrap-around rear seat.

Chrysler continued with its successful smooth body lines and fins that gracefully ramped up with no hard edges. Plymouth’s Fury received quad headlamps but little else.

Packard was still on the scene, albeit as a reworked Studebaker. With an empty bank account, little could be done to resurrect the dying brand, leaving designers to cheap fiberglass add-ons for front end and rear end treatments. Packard sedans were simply Studebakers with 1956 Packard tail lamps. 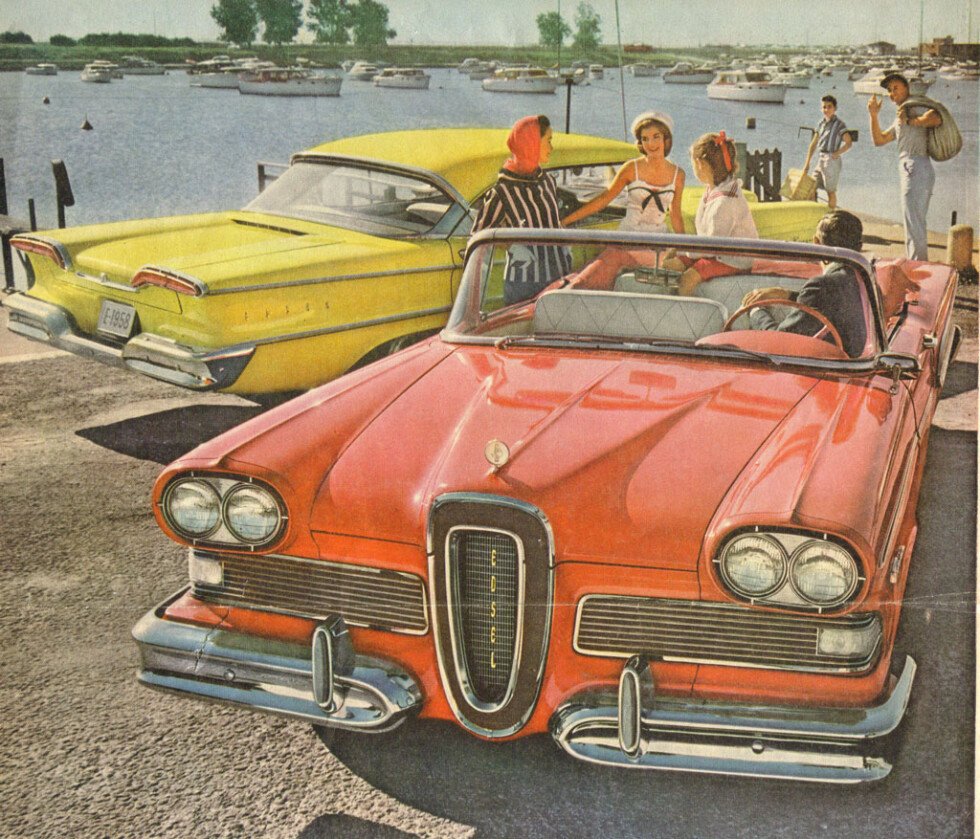