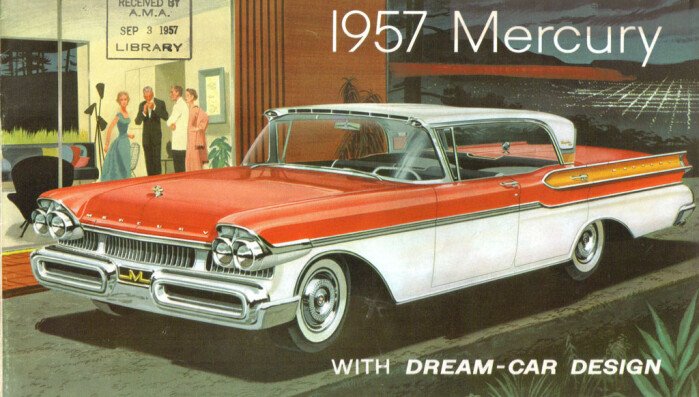 General Motors introduced styling updates for all divisions in 1957. While Chevrolet was a hit with the average buyer, it was the Cadillac division that took styling to excess proportions with the Series 70 Eldorado Brougham, Seville hardtop and Biarritz convertible. The hand-built Series 70 Brougham, simply put, was “poetry in motion.” Designed by Ed Glowacke, its styling was extraordinary. The Brougham was distinguished by a brushed aluminum roof panel and quad headlamps, a first for 1957. The rear end treatment included pinched tail fins, holding slim vertical tail lamps that rested above one of the most unusual split rear bumpers ever designed. At each end were exaggerated Dagmar bumper guards with slatted exhaust vents located below. Stainless steel panels surrounded rear wheel openings. The four-door hardtop also received suicide style doors. For convertible-minded buyers, the Eldorado Biarritz convertible was available. Most striking was the rear end treatment with sloped quarter panels holding a single round tail lamp with a large tail fin that gave a dramatic look. All Cadillac interiors were ultra luxurious.

Chevrolet stylists did an incredible job taking the good looks of its 1956 models and making them look better. Chevy’s grille was refined, and Bel Air grilles and signature side trim received gold anodizing. Bombsight ornaments were set on each side of the hood with sleek risers trailing off towards the windshield. Headlamps were set into squared off housings. Tail lamp treatments gave the first hint of a fin, without being too over the top.

Both Oldsmobile and Buick received front and rear updates. Most notable were the gun barrel tops to Oldsmobile’s quarter panels and stylish three-piece rear windows on both Olds and Buick. Buick’s four-door hardtop station wagons also made their way into the showrooms, proving that styling wasn’t just for two-door hardtops and convertibles.

Chrysler’s new catch phrase was “Suddenly it’s 1960.” The futuristic look allowed Chrysler to win not just one but two gold medals for styling. Although the Exner touch added fins and chrome, the look was best described as simple yet elegant.

Plymouth redesigned its entire line, but the standout was its Fury model. From every angle, it looked new. The front end look was sleek, with highly peaked head lamps and a full-width gold anodized grille. Alcoa Aluminum Company supplied the Fury’s magnificent side trim.

Ford Motor Company put their stylist into high gear, bringing out a number of new entries. The mildly sculptured full size Ford updated last year’s large round tail lamps and subtle fin by making both larger. The Custom 300 and Fairlane 500 models included gold anodized side trim that ran the length of the vehicle. Ford announced a special hardtop convertible. Unfortunately, it met with little sales success.

Mercury should have taken the direction of Ford when bringing out its 1957 model. Unlike Ford’s clean lines, Mercury was destined for failure, with its bolt-on quad head lamps, heavy looking body lines and, on the Turnpike Cruiser model, twin antennas nestled on the roof top. 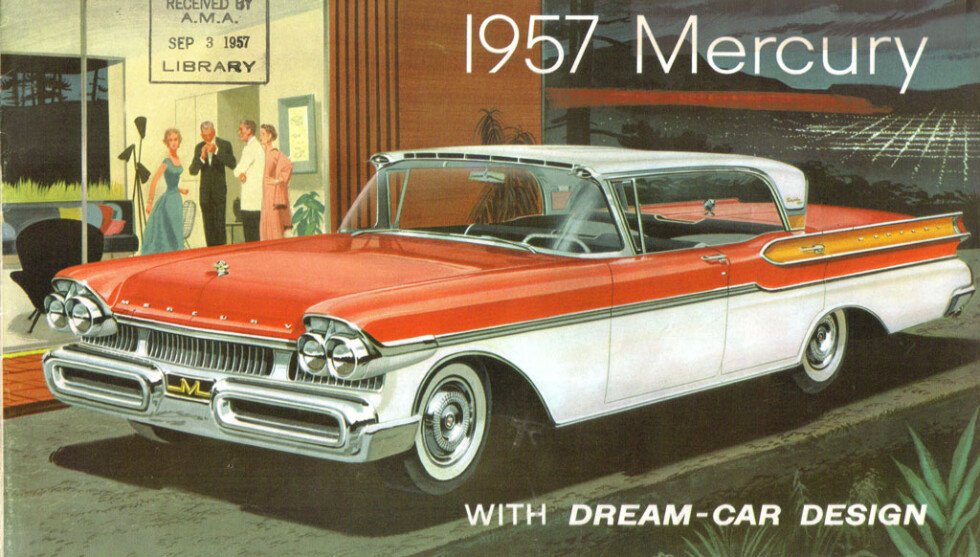