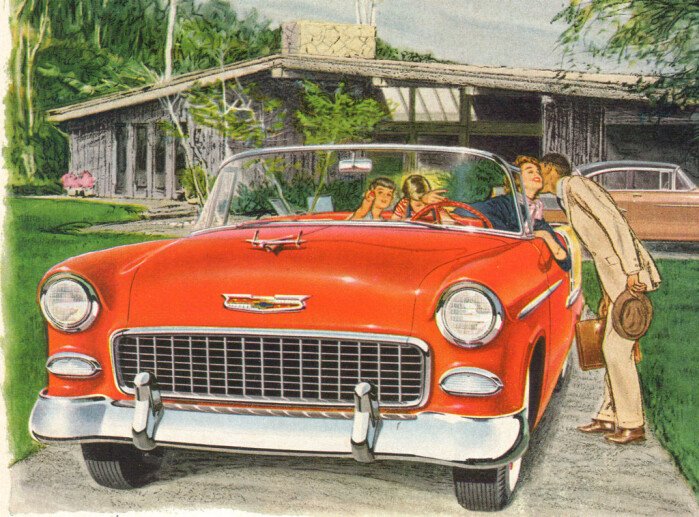 The pivotal year for 1950s styling, 1955 saw a list of extraordinary vehicles, particularly from General Motors and Chrysler, which brought futuristic styling to the masses. Chrysler’s “100 Million Dollar Look” finally gave the smallest of the Big Three a chance to compete. General Motors brought in so many new body styles, it’s difficult to list them all. With the exception of the new Thunderbird, Ford Motor Company carried over most of its product lines.

No vehicle captured the essence of Chrysler’s 100 Million Dollar Look better than the Chrysler C300. Interestingly, the look didn’t come from chrome, fins and hard edges, but from its understated lines. The sides were flat, there was little chrome except for the stunning split grille and bumpers, and the only hint of a fin was with its mild mannered tail lamps resting on top of the quarter panel. Chrysler was ready to play the styling game. The Plymouth and Dodge divisions weren’t ignored either, both touting new attractive body styles.

But General Motors wasn’t about to sit back quietly. They released new bodies for four of their five divisions. Only Cadillac kept the previous year’s body design. Chevrolet shed its old image, with Designer Charles Stebbins reshaping every inch, under the guidance of chief stylist Harley Earl. Chevrolet’s earlier shark tooth grille gave way to a Ferrari-inspired egg crate version. Headlamps were peaked at the top. Rear fenders, while slab sided, were more attractive than the bolt-on units of 1954. Simple tail lamps extended out slightly at the tops of the quarter panels, and side trim was purposely designed to allow two-tone paint.

Buick finally shed its toothy vertical grille bars, opting for a simpler mesh look. Its trademark teardrop headlamps were gone. Buick’s signature “sweepspear” side moldings remained, as did fender venti-ports, albeit slightly redesigned. In back, large angular tail lamp housings held both tail lamps and back up lamps.

Pontiac’s facelift was similar to Chevrolet’s, with new sheet metal all around. GM’s step up division doubled up on its chrome hood straps. Bright trim covered the top edge of each quarter panel. Split front bumpers with a body colored center grille gave a wide track look. Eyebrow-looking scoops were designed into front fenders just above the headlamps. The lower quarter panel of the Star Chief model was covered with stainless steel trim. While the Pontiac was a mid-priced vehicle, its looks suggested expensive.

GM’s Oldsmobile division received a mild facelift. The front end was freshened up via an oval grille opening with the word “Oldsmobile” spelled out above the horizontal grille bar. Fenders were peaked above the headlamps, and Oldsmobile’s signature rocket hood emblem was displayed prominently. Side moldings were revised on both the 88 and 98 models.

Ford made a bold move to challenge Corvette with their own sports car. Enter the Thunderbird, a stylish two-seater that had both beauty and speed. Unlike the Corvette, the Thunderbird’s body was sheet metal. It combined the long hood and short deck design. The most prominent feature was its stylish hood scoop.

Ford’s full size passenger cars were longer and wider. The grille now graced the full length of the front end and was capped off with bullet shaped parking lamps. Heavily peaked headlamp bezels gave a forward look. All Fords finally included a wraparound windshield. Quarter panels with a stamped feature line gave the impression of a small fin. The crown Victoria was the top dog in the Ford lineup. The model included a large stainless steel molding that ran upward between the door and quarter glass then across the roof. An optional, tinted one-piece Plexiglas roof panel could be ordered to let the sun shine in. 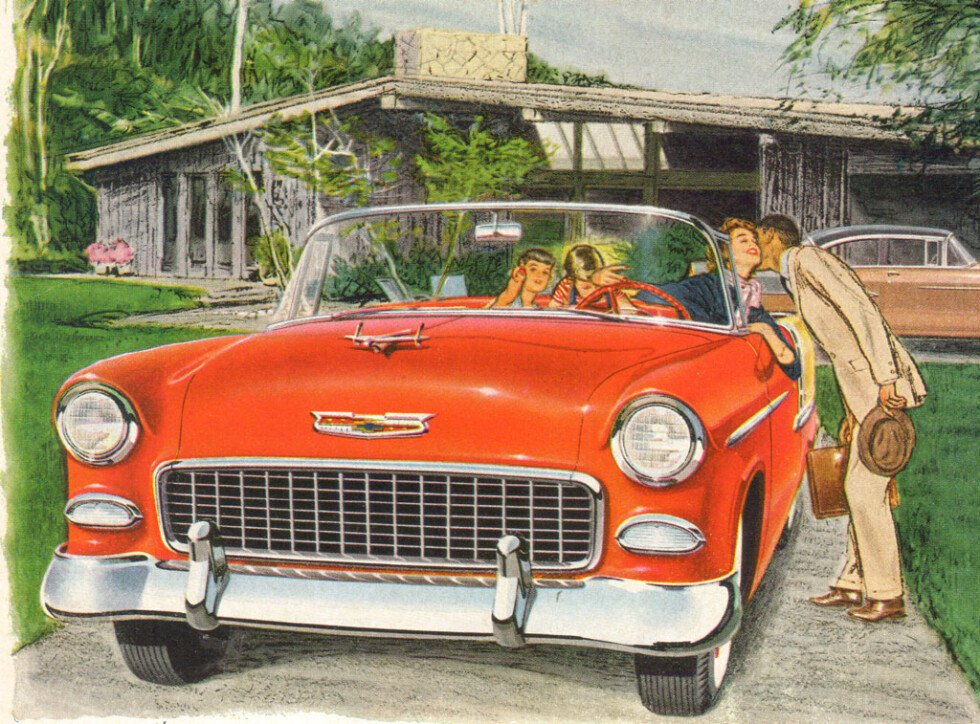