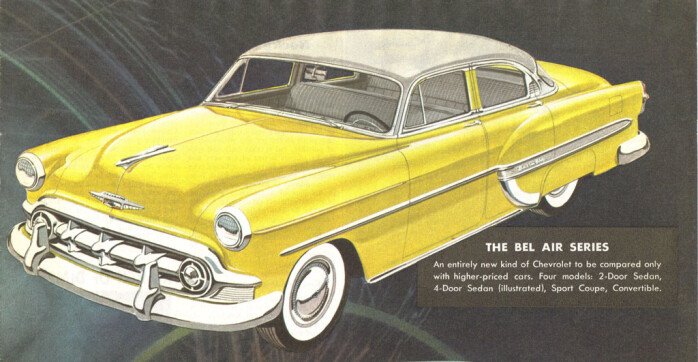 General Motors had a great year in 1953, with the introduction of the Chevy Corvette, Buick Skylark, Cadillac Eldorado and Oldsmobile Fiesta. These limited production vehicles became of some of Harley Earl’s best work and began the styling revolution for not just GM but all domestic manufacturers.

The fiberglass two-seat Corvette roadster was America’s first true sports car and cemented Chevrolet as the styling and performance king. With a low-slung body barely waist high, the Corvette commanded immediate respect. From both front and rear, styling was futuristic. Gracefully sloping head lamps were covered with wire mesh, and quarter panels with bullet-like tail lamps gave a rocket ship like appearance. While its power didn’t match its looks, Chevrolet engineers were hard at work preparing to drop the small block V-8 between its frame rails.

Harley Earl’s beautifully crafted Buick Skylark, Cadillac Eldorado and Oldsmobile Fiesta hit the streets in 1953. All were limited production six-passenger convertibles for the well heeled. Buyers needed to be well off, with their prices ranging from about $5,000 to $7,800, nearly triple that of other cars. While at first blush all looked similar to their lower priced cousins, they were in fact new from top to bottom. With specially designed sheet metal having a cut-down beltline and a classic dip in the quarter panel, these extravagant luxury vehicles were definitely for the style-conscious. Another first was their true wrap-around windshield. Only the Eldorado featured a special folding top that, when down, was covered with a metal tonneau cover.

The rest of the GM lineup received bolder grilles, new trims, new tail lamps and a one-piece but not wrap-around windshield. Chevrolet began using a more defined shark tooth grille similar to the Corvette. And while it wasn’t actually a fin, small fin-like bulges were designed into the top of the quarter panels. Interior stylists kicked up Pontiac’s interior a few notches with tufted seat covers and a liberal amount of chrome.

Chrysler’s sheet metal was mildly massaged and its roofline lowered several inches. Most models had their grilles redesigned. Plymouth got into the styling game with a new grille, side moldings and slab sided quarter panels. Rooflines resembling fastbacks were available on some Dodge models. The Imperial received a new roofline, restyled quarter panels and new tail lamps.

Kaiser, another independent, took an unorthodox approach to styling with the up-market Dragon model. Perhaps the most unusual design was its roof that not only had an excessive slope to the rear but also a windshield opening that peaked in the center, giving it an eyebrow look. Behind the rear door, the roof did a reverse and angled forward. All Dragon models were finished with a padded vinyl top material called “bambu.” The same material found its way inside, covering the dash, door panels and seat inserts.

Studebaker Corporation took a big leap forward with its stunning Raymond Lowery-designed Champion coupe. It was nearly as low as the Chevrolet Corvette and had the lowest profile of any family vehicle. The twin split grilles and flat hood added to the low profile. Not only was it handsome, it was the only low price car to offer a V-8 engine.

One of the most stylish offerings for 1953 didn’t come from the Big Three but from Packard, the company that boosted “Ask a Man Who Has One.” Packard was on its knees but came out of the 1953 door both barrels blasting with the announcement of the Caribbean convertible. The Caribbean was all new, yet the grille was clearly Packard. With chrome-trimmed full opening wheel wells, stylish hood scoop, and wire wheels, the Caribbean was the epitome of styling. 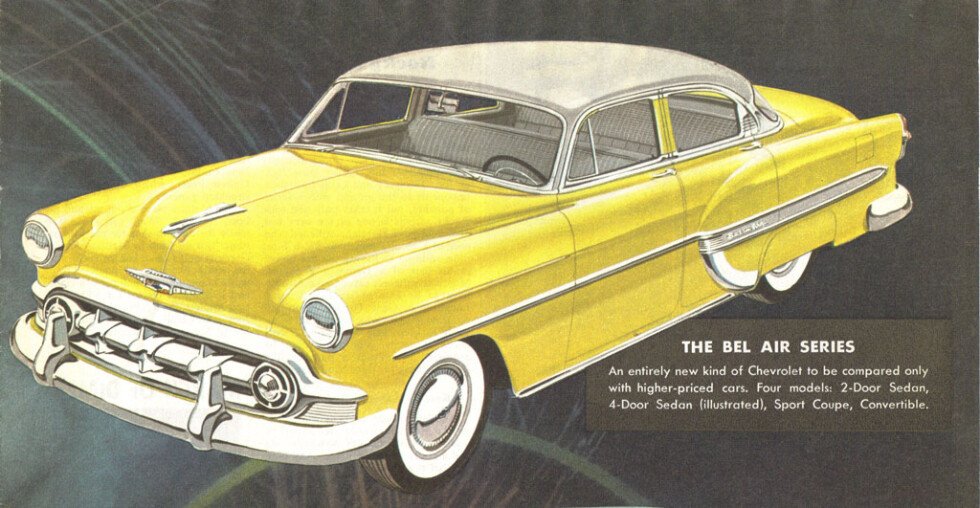