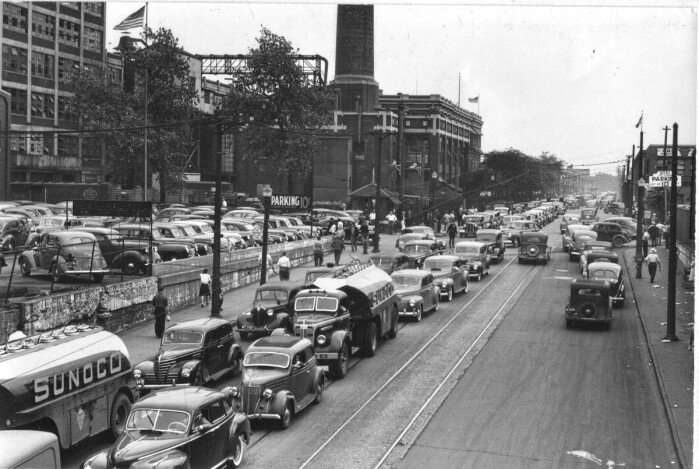 Photos courtesy of the NAHC


While the Dodge brothers, John and Horace, were an integral component to the evolution of the domestic automobile business, they received little credit for their extraordinary contributions. The primary reason for this lack of credit was that while they were entrenched in the auto business for about 17 years, they were involved with producing their own vehicles for only six years. For those familiar with the Dodge brothers, their legacy lived on as the company they founded produced millions of reliable Dodge products and continues to do so today.

Prior to producing their own automobile, John and Horace Dodge were well established as a high quality auto parts supplier. After producing engines for Oldsmobile, they received a large contract with Ford Motor Company. Dodge was to produce nearly everything with the exception of the body, wheels, and tires. Dodge assembled their parts to produce a rolling chassis that was then shipped to the Ford Motor Company for completion. The Dodge factory was on Monroe Street and employed 130 craftsmen. After providing a substantial number of assemblies, the Dodge brothers were advised that Ford didn't have the cash to pay for the parts. Wisely, instead of canceling the contract, the Dodge brothers offered to take a 10% stake of Ford stock in exchange for the $10,000 owed to them. Later this agreement proved to be one of the best decisions the brothers had ever made. Their initial investment of $10,000 grew substantially when, in 1919, Henry Ford bought back their stock for $25 million. Over and above the $25 million in cash they received from the stock, John and Horace received an additional $5.4 million in dividends and $2 million in profits from their contract. Their small investment gave a total return of over $32 million during a 16-year period.

With a growing list of auto companies contracting with Dodge, the brothers added more space to the Monroe Street facility. Although now larger, the Monroe factory became inadequate by 1909. The Dodge brothers purchased 24 acres of land within the city limits of Hamtramck, a small hamlet within the boundaries of Detroit for $100,000. Albert Kahn was chosen for the job of designing the new Dodge facility. Kahn was a well-respected architect, having previously designed both the Packard and Ford assembly plants. With 300,000 square feet of floor space, the $750,000 Dodge facility was completed in January 1911. Over the next three years, business continued to grow and an additional 300,000 feet of floor space was added. Some in the business worried that the brothers were expanding too rapidly, but the two brothers weren't especially concerned since they were secretly planning to produce their own vehicle in the near future.

The launch of the Dodge automobile was coming to the party quite late considering Ford, Packard, and a few other companies were well established with the public. It appeared that it would be an uphill battle to grab a substantial piece of the market share for a company new to the car producing business. But because John and Horace were considered two of the best auto men in the city, they believed that they were well prepared for the task.

Developing a national sales organization was one area that John and Horace had no experience with. The brothers quickly found out this wasn't going to be as big a problem as they first thought since they were well respected as suppliers to several major manufacturers. After announcing their decision to build vehicles, over 13,000 dealers asked to become Dodge sales representatives before they saw the first car. Dealers that made the cut placed over 72,000 orders by the time the first car rolled off the assembly line.

Dodge advised Ford and others that they would no longer continue to produce their parts. By mid-1914, Dodge Main was being readied for vehicle production and on November 14, 1914, the first Dodge vehicle was completed. A 212 cubic-inch, four-cylinder engine powered the car, a touring roadster. Nearly 13 feet in length, the roadster weighed about 2,200 pounds and sat on a 110-inch wheelbase. Retail price was $785.00 FOB Detroit. Unlike most other manufacturers, Dodge produced many of their own components at the factory. By the end of the year, demand for their cars was so high that Dodge needed to add an additional four-story building to accommodate production.

The Dodge Main facility was the first domestic manufacturing plant that had their own test track on plant property. Until then, automotive companies tested their vehicles on the streets of Detroit. The Dodge Main oval test track was a quarter mile in size and built from wood planks. It included a steep hill climb at the north end of the facility to test vehicle power and braking.

By 1915, the plant was running in high gear to fill the needs of the buying public and by the end of 1915, more than 43,600 Dodge vehicles were built. Employment grew to 7,000. Over the next few years, the folks at Dodge Main continued to crank out cars at record levels.

In 1917, the plant was expanded once again and now included front offices, a power plant, several assembly buildings, foundries, and heat-treating plants. By mid-1919, employment again increased to nearly 17,000. By 1920, Dodge Main encompassed an amazing 3.3 million square feet of floor space, and Dodge was now the fourth largest producer of automobiles in the United States.

As GM's CEO Charles "Engine Charley" Wilson said many years ago, "What's good for the country is good for GM, and vice-versa." On a much smaller scale, the same comment held true for the city of Hamtramck and Dodge. In 1900, Hamtramck was a small community comprised mostly of immigrants from Poland. The population was barely 500. By 1910, with the Dodge Main factory up and running, the population of Hamtramck grew to 2,559. Population continued to grow and by 1920, it increased to over 48,000 residents with about 66% of the heads of household coming from Poland. These were hard working people willing to do whatever it took to grasp a small piece of the American Dream. Most didn't speak English, but that didn't stop them from asking for a job and promising to work hard with their arms and backs. Contrary to other auto manufacturers, Dodge treated their employees with much respect. The company provided a humane environment for all workers. Benefits included life insurance, a company bowling league, baseball team, and a band. For those who retired, Dodge Main had an area set aside with a workshop so retirees could build crafts of their choice.

Things continued to go gangbusters for the Dodge Corporation, but unknown to anyone, personal tragedy would strike a blow to the company. In 1920, just six years after producing their own car, John Dodge, at the age of 55, passed away from pneumonia while attending the New York Auto Show with his brother. Less than a year later, Horace, age 52, passed away in Palm Beach, Florida. Their children showed no interest in managing the business. The Dodge heirs handpicked Frederick J. Haynes, Dodge's works manager, to become the CEO. Haynes remained in that position until 1925. Under his control, yearly production increased to about 200,000, and while good, it was no comparison to Ford's 1.675 million units produced. During Haynes' tenure, seven new buildings were built, adding another 1.2 million square feet of factory space.

As it grew, Dodge Main became a city within a city. The facility included a hospital, laundry services, post office, fire department, print shop, photographic department, restaurant, barbershop, and police force. Also contained within the complex was a weather bureau. The bureau was used to monitor specific weather conditions to assist in the proper drying of the enamel paint used on Dodge vehicles.

Purchasing Dodge was a smart move for Chrysler. The company now had the added production capacity of Dodge Main, plus four unique levels of vehicles. The entry-level Plymouth satisfied economy-minded owners. The Dodge was next with a small step up in price, but a big step up in features. From there, buyers could order the upscale DeSoto, and those with deep pockets and a lust for luxury could opt for a Chrysler. After the sale to Chrysler, Dodge Main was revamped to produce both Dodges and DeSotos, again adding more employment.

Prior to the Great Depression, Dodge Main was a blessing for the many immigrants within the city of Hamtramck. City coffers were full of property tax money, and local merchants enjoyed the business of Dodge employees. By 1927, 30,000 workers were producing over 250,000 vehicles per year. But signs of difficult times loomed ahead. The Great Depression was kicking in, and devastating the automobile business in Detroit as well as the communities that housed their assembly plants. By 1932, Dodge production fell by nearly 90% to just over 28,000 units. It would be many years before things got back to normal.

America's early involvement in World War II was a shot in the arm for all Detroit automobile manufacturers, and Dodge received their share of contracts to produce war materials. Slowly, Dodge Main came back to its earlier glory days. Employment peaked at 40,000 as war materials continued to be sent overseas. After the war ended, pent-up demand for cars reached new levels, keeping thousands of employees on the job. Adding to that, the start of the Korean War in 1950 gave a second shot in the arm to Hamtramck's massive manufacturing facility. To accommodate production, more buildings were added, and Dodge Main now encompassed a massive 5.1 million square feet of floor space.

Employment began to shrink by the mid-1950s, mostly due to the end of defense contracts, lower demand for new cars, and the advent of automation. By 1963, employment shrank to 8,300. During the fuel crisis of the 1970s, production slowed and finally Dodge Main couldn't hang on any more. On a cold January day in 1980, the plant finally closed. It was later torn down to become a small portion of the 465-acre General Motors assembly facility affectionately known as the Poletown plant, for the many Polish descendants who worked hard to live the American dream. Reflecting on the rich history of Dodge Main, one must feel proud of the significance the facility had for its workers, its city, and the millions of Dodge owners worldwide. 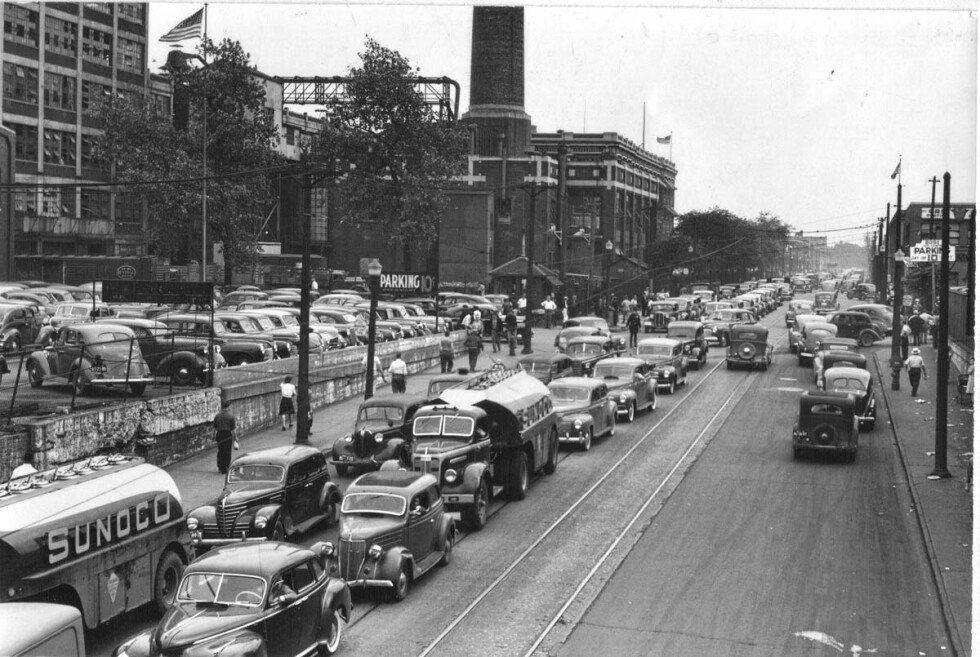