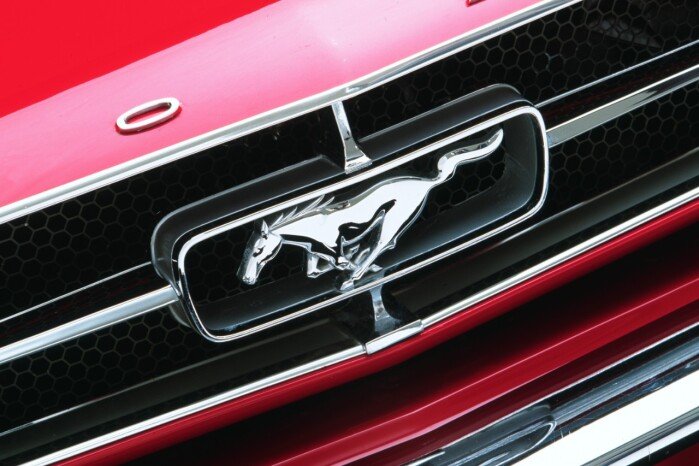 
In its fifty years as an American automotive and pop-culture icon, the Ford Mustang has become as familiar as Monday Night Football, pumpkin pie and Seinfeld reruns, but here are few things you may not have known about the original Pony Car:

Although Mustang was always a front-runner for the car’s name, it wasn’t a lock until deep into the car’s development. In fact, many design studies pointed to Cougar was the preferred name – including prototypes of the famed “corral” grille emblem showing a cougar inside rather than the running horse. As the story goes, Lee Iacocca and Henry Ford II settled on Mustang in November 1962, less than 18 months before the car’s debut. Other names in the running included Bronco, Puma, Cheetah and Torino.

Talk about instant success. The driving-age Baby Boomers were waiting with baited breath for Ford to introduce the Mustang and rushed dealerships as if the Beatles were the salespeople. A total of 418,810 were sold in the first year. If that had occurred in 2012, the Mustang would have been second only to the Ford F-Series in annual sales, placing it ahead of Chevy’s full-size trucks (418,312), Toyota Camry, Honda Accord and all the rest. By the way: Of those 418,000+ first-year Mustangs, 22,000 were sold on the first day alone! That’s about 27 percent of all the Mustangs sold in all of 2012. Ford reached the one-million Mustangs milestone by February 23, 1966 – less than two years after it debuted. Wow.


3. The first Mustang off the assembly line was mistakenly sold in Canada

The historic first Mustang to roll off the assembly line – the one with serial number 0001 – was inadvertently sold to airline pilot Stanley Tucker, in St. Johns, Newfoundland. It was part of a display meant to show off the Mustang to customers, but not designated to be sold. Nevertheless, Tucker convinced the dealership to sell him the white convertible and it took a couple of weeks in those pre-Internet days for Ford to discover Mustang number 1 had gone missing. Ford tried to buy it back, but Tucker initially refused. About two years later he “traded” it in at Ford’s headquarters for the one-millionth Mustang produced. It was another white convertible.

Ford supplied three modified Wimbledon White Mustang convertibles to serve as pace cars for the 1964 Indianapolis pace car. Each was fitted with a modified 289 V-8 and after the race, two of them disappeared. The vehicle identification numbers of all three are known, but only one, which ended up as a pace car at Florida’s Sebring track, has been tracked. The other two have never resurfaced. Where are agents Fox Mulder and Dana Scully when you need them? By the way: Ford also supplied 35 additional, bone-stock “festival” cars for the race that year.

No kidding. With its diminutive size, lack of a V-8 engine and a legacy definitely lacking in respect, the introduction of the downsized Mustang II proved very successful for Ford. Approximately 386,000 were sold the first year, nearly tripling the sales of the 1973 Mustang. Although the lack of a V-8 seems incongruous for a Mustang, the Mustang II came along during the energy crisis, when efficiency trumped horsepower. A four-cylinder was standard and V-6 the only engine option, but the 302 V-8 returned to the lineup in 1975.


6. Jack Telnack saved the 1979 Mustang from being a Granada knock-off

When work commenced on the design of the third-generation Mustang – the car that would be known as the Fox-body – the Dearborn-based design staff was under strict orders to keep the styling formal. It was the mid-1970s, after all, and landau roofs and neo-classical design was popular, so a slanted nose was forbidden. The design concepts weren’t inspiring and certainly didn’t scream “MUSTANG.” That changed when design honcho Jack Telnack returned in 1975 from overseas stints at Ford’s European and Australian arms. He pushed the designers to start over with sleeker, European-influenced designs, including a slanted nose. The rest is history.


7. The Mustang SVO was not the first EFI turbocharged Mustang

In 1983 Ford introduced the Mustang GT Turbo, which featured the same turbocharged, non-intercooled 2.3-liter four-cylinder that debuted that year in the all-new “aero” Thunderbird Turbo Coupe. It was rated at 145 horsepower. The engine represented a giant technological leap over earlier carbureted turbo engines, with a modern port fuel injection system that’s still used on most vehicles today. Unfortunately for the GT Turbo, the hotter 5.0-liter V-8 GT was more powerful for a comparable price and the intercooled Mustang SVO was introduced the next year. Only 556 were built in 1983 and about 4,000 were built in 1984, the GT Turbo’s second and final year.


8. The Ford Probe was the car slated to replace the Fox-body Mustang

Ford was working on the Fox-body replacement for the Mustang throughout the 1980s, scheduling it to debut in 1989, around the time of the car’s 25th anniversary. When word got out the car would be – gasp! – front-wheel-drive and without V-8 power, loyalists and casual automotive fans around the world registered their immediate disapproval. Ford took the feedback to heart, released the new car as the Probe and immediately went to work on the SN95-generation Mustang that debuted in 1994 (on a modified Fox platform).


9. The 1990 “7-Up” Mustang was the result of a failed NCAA basketball promotion

What do you when you’re geared up to produce a number of uniquely outfitted Mustangs for a promotion and the rug gets pulled out from under you? Damn the torpedoes and continue full-speed ahead! That was Ford’s response when informed the original deal to provide 30 green-with-white-top Mustangs as giveaways for a 7-Up promotion for the 1990 NCAA basketball tournament was scuttled. Having already developed the package when the promo’s plug was pulled, Ford proceeded with production and dubbed it a special edition (with no mention of the aborted promotion). Ford produced 4,103 cars, which were later nicknamed the 7-Up Mustangs by enthusiasts.

The year 2004 was a big one for Ford’s Dearborn Assembly Plant. It built the 300-millionth Ford that year – a 40th Anniversary Mustang GT convertible – and its final Mustang, after forty years of production. The historic plant changed over to produce the F150 pickup and the Mustang moved to the Flat Rock plant, about 20 miles south. Ironically, the Flat Rock plant was also home to the almost-Mustang Ford Probe, from 1989-97.


Before the running horse there was a pouncing cat in the grille of early design concepts. Cougar was a leading name for the car before Mustang was confirmed.

After lining up at the World’s Fair in New York, where the Mustang made its public debut, customer lined up at dealerships and bought 22,000 of them on the first day it went on sale.

Although all first-year Mustangs are technically 1965 models, the first six months of production are referred are known as 1964-1/2 models. The fastback body style didn’t arrive until Oct. 1964, so it isn’t considered a ’64-1/2.

Airline pilot Stanley Tucker poses with Mustang serial number 1 that he persuaded his local dealer in St. Johns, Newfoundland to sell him – but Ford never intended to sell it.

Ford finally got serial number 1 back in 1966 by “trading” Stanley Tucker the one-millionth Mustang for it.

It may still seek respect today, but the Mustang II was a sales success upon its launch for 1974, with nearly triple the sales of the ’73 model.

This was an early Mustang II concept under consideration. Seriously!

A V-8 rejoined the Mustang in 1975, after going missing in 1974, and the Cobra II was introduced in 1976 in an attempt to re-inject some sportiness into the lineup.

Before designer Jack Telnack took the reins, the Fox-body was heading in this very formal direction – definitely more Fairmont than Mustang.

With its slanted nose and minimal bright trim, the 1979 Mustang blended a European aesthetic that took the car roaring into the high-tech 1980s.

The Mustang GT Turbo’s 2.3L engine was rated at 145 hp, but lacked the performance-boosting intercooler that helped the SVO engine produce 175 horses.

The Ford Probe “officially” replaced the Escort-based EXP in the Ford lineup, but it was originally intended as the fourth-generation Mustang – until enthusiasts said no way to a front-drive ’Stang.

While it wasn’t the Mustang, the Probe held its own in the market and Ford even pushed it in motorsports, including running the sleek, second-gen body in Pro Stock in the mid-1990s.

The 1990 Mustang known as the “7-Up” model was the result of an aborted NCAA basketball tournament promotion. Ford had developed the package already, so the company introduced it as a special edition.

A 2004 40th Anniversary Mustang GT was the 300-millionth Ford vehicle produced, and it was built at the Dearborn Assembly plant. Interestingly, the 100-millionth Ford as a 1978 Fairmont – the platform on which the 2004 Mustang was derived. It took Ford 75 years to build its first 100 million vehicles, but only 26 years to build another 200 million.

The Dearborn plant celebrated the one-millionth Mustang milestone in 1966, less than two years after the car went on sale and smashed sales records.

Today, the Mustang is built at Ford’s Flat Rock, Mich., plant. It started with production of the S197 (2005+) generation and in April 2013, the plant marked its millionth Mustang produced there. 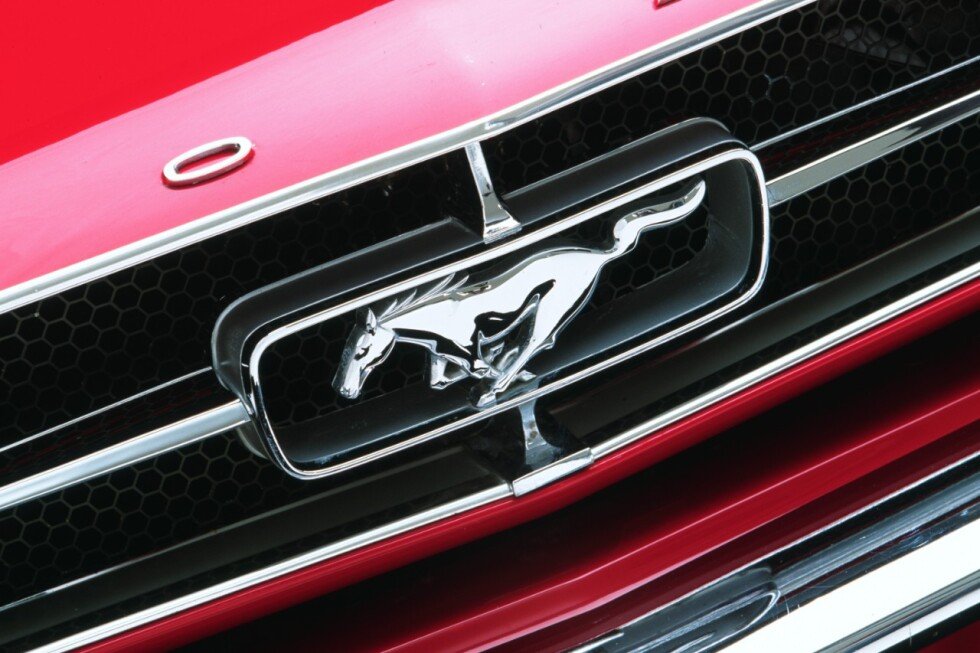