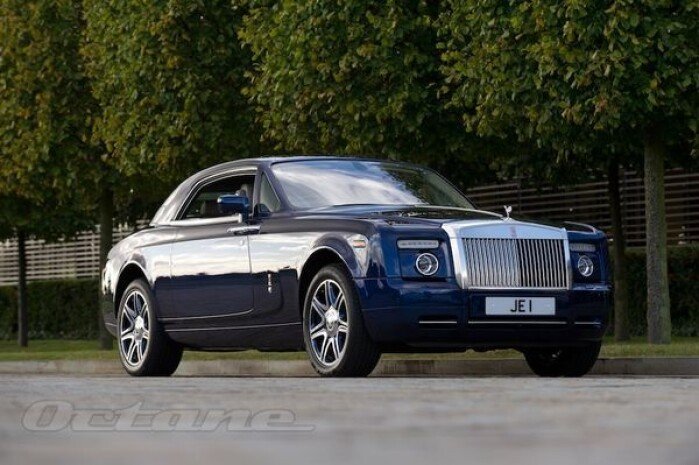 Oh, the irony. Rowan Atkinson’s new movie, Johnny English Reborn, may be an unashamed parody of the James Bond films, but not only has it been made with a Bond-film budget and at Bond-film locations, it has well and truly out-Bonded Bond when it comes to personal transport for British Intelligence’s top agent.

In the first Johnny English movie, made in 2002, the eponymous hero – played by Rowan, then as now – drove an Aston Martin DB7 Vantage. For the new film, released in September  2011, he is upgraded to a Rolls-Royce Phantom Coupé. And not just the regular V12 Coupé, but one powered by a 9.0-liter V16 engine. For anyone who remembers the disappointment of seeing Pierce Brosnan driving a BMW Z3 in Goldeneye – and not even an ‘M’ Coupé, but a hairdresser’s Roadster – there’s a peculiar satisfaction in that.

Rowan, of course, is a great car enthusiast, who is able to afford the very best but who buys cars to drive rather than to show off as status symbols. He’s previously owned a Phantom saloon in which he racked-up nearly 80,000 miles, and it was his appreciation of the car that sent him knocking at Rolls-Royce’s door when it came to choosing a ‘star car’ for Johnny English Reborn.

‘I felt that the Aston thing had been rather overdone, and I’d become quite a fan of the Phantom,’ he says. ‘But I wanted to give the car a little bump, something special that no other Phantom had. Such as a 9.0-liter V16 engine.

‘Rolls-Royce had built three or four of these engines while developing the Phantom and then stuck them away in a warehouse somewhere. But I knew that they existed, so I got in touch with Rolls-Royce and said, would you mind squeezing one of them into our Johnny English Phantom Coupé, and very sweetly they agreed to do it.’

Rowan’s powers of persuasion seem all the more remarkable, given Rolls-Royce’s (or, more accurately, BMW’s) coyness in talking about these experimental V16s. In best BBC Radio 4 Today program style, nobody from the engineering department was available for interview. Instead, we were invited to submit a list of questions for written responses. Here are some of them:

Author: What are the exact power and torque figures and at what rpm?

Rolls-Royce: Not info we can supply.

Author: What are the bore and stroke dimensions of the cylinders?

Rolls-Royce: We can only confirm the displacement, 9.0 liters.

Author: What make and type of fuel injection  is used?

Rolls-Royce: Not information we are willing to disclose…

And so on. Best guess about the power and torque figures is just under 600bhp and maybe 670lb ft, respectively – a normally aspirated V12, as used across the Phantom range, puts out 453bhp and 531lb ft in comparison. It’s a Rolls-Royce quirk that their most expensive cars have less powerful engines than their ‘entry level’ model, the Ghost (563bhp and 575lb ft); because, the company argues, the throttle response and torque characteristics of the unblown V12 make it better suited to the character of the Phantom.

The official history is that the V16 was designed after the Phantom had been launched, and was never seriously considered for production. It was, says Rolls-Royce, purely an experiment for project 100EX – the show car that was a precursor to the Phantom Drophead Coupé. But rumours persist that it was originally destined for the Phantom four-door saloon, which has a bigger engine bay than the Coupé – and Rolls-Royce did keep very quiet about the V16 when 100EX was presented. The company line now is that ‘…we could not be confident that a V16 could deliver on Rolls-Royce attributes of effortless performance, silence and magic carpet ride’. Insert your own conspiracy theory here.

What’s not in dispute is that one of the three V16 engines built was fitted into a four-door Phantom test mule, and Rowan remembers being driven in it at Goodwood about two years ago.

‘It felt very sorted, and had a “wonderland waftability” about it. But a V16 is very off-message at present, given the environmental sensitivity of the BMW group as a whole. Rolls-Royce was certainly nervous about the engine being used in the Johnny English car.

‘Personally, I feel that a normally aspirated V16 would have been appropriate for the Phantom. Glamour and rarity counts for much with Rolls-Royce owners, and I myself would certainly be a customer for a V16 Phantom. I’m not sure how “on message” Rolls-Royce really needs to be!’

So why won’t the company offer a V16 Phantom, and to hell with the Green lobby? Simply because its parent BMW cannot afford to be so insensitive to public opinion. A V16 would appear unacceptably profligate to many.

BMW has actually been here once before. In late 1987, an experimental 6.7-liter V16 was developed from the 5.0-liter V12 used in the then-new E32 7-series. It was slotted into a modified 750iL bodyshell and codenamed Goldfish – reputedly because the 750 shell was already painted gold. The extra length of the V16 didn’t leave enough room in the engine bay for a radiator, so two smaller ones were angled across corners of the boot, and in this form the car was tested several times at the Norisring in Austria. Even in a soft state of tune, the V16 gave 408bhp and 461lb ft of torque, a huge increase over the V12’s 300bhp and 332lb ft.

But there was never any serious intention to put this 1980s V16 into production; it was simply a technical exercise to give BMW’s engineers their head. And that, insists Lars Klawitter, the head of Rolls-Royce’s ‘bespoke’ department, was exactly the rationale behind the RR V16, too.

‘It was built to push the envelope, to see what could be done,’ he says. ‘The Phantom had already been signed off two years earlier, and the V16 was purely intended to go into 100EX. Five sets of parts were made, and three engines built up – one went into the Phantom test mule, one into 100EX and, now, one into the Johnny English car – but some of the spare parts were destroyed during testing, so if we now needed, say, a new piston, we’d have to machine it from scratch.’

Making one of these three V16 engines work reliably in a movie car was the biggest challenge that Lars and his team faced, given a very tight schedule. ‘The project began in August 2010 and the first scenes with the car were shot that October,’ he explains. ‘We provided two cars: one fitted with the V16, and another one that was dummied-up as a stunt vehicle, plus a spare set of seats and a stand-alone facia for close-up filming.

‘We could have made life much easier for ourselves by just cladding a V12 with a fake engine cover so that it looked like a V16, but that’s not the Rolls-Royce way of doing things. We felt it was important that the car actually worked in the way it was supposed to.’

Fortunately, Rolls-Royce’s commitment has been rewarded with quite a lot of screen time in the movie. The engine itself, clearly badged as a V16, is shown off to Rowan’s character by the film’s equivalent of Q, Pat Quartermain – played by Blackadder veteran Tim McInnerny.

Of course, the Phantom has a couple of non-standard options, of which the most memorable is a Spirit of Ecstasy mascot whose ‘eyes’ fire lasers. Ironically, although the V16 slotted into the Phantom’s engine bay without any need to alter the rear bulkhead or relocate the radiator, it did mean that the production car’s electric retracting mechanism for the mascot had to be sacrificed. A special rig was built for the close-up of the mascot rising out of the radiator surround.

Rowan told us that he would have liked to make even more use of the Phantom – which is known as ‘Royce’ – in the film. ‘I had this idea of a car chase in which the baddies are driving a Lamborghini Gallardo flat-out, all smoking tyres and sideways cornering, while Johnny English calmly follows them in the Phantom, steering it with one finger and looking totally relaxed. And we actually filmed one scene that didn’t make  the final cut, in which henchmen are firing sub-machine guns against the Phantom’s windows, which causes Johnny to turn to his sidekick and enquire casually, “Can you hear something?”’

Rolls-Royce has turned down all requests by the world’s media to drive the V16 Phantom, since it is not a properly sorted car – but  we were uniquely privileged to give it a  quick spin around the Goodwood factory site. It was impossible to glean anything meaningful from such a ‘test’, other than that the extra  weight and size of the V16 were unnoticeable – although we did feel it wasn’t quite as turbine-smooth as the V12. Just as the company predicted, in other words.

Amazingly, you can now order your own Johnny English Coupe replica, in the same North Shore Blue paint and with the same colour-coded wheels, albeit with a V12 engine. And there’ll be one tiny but significant other difference – the replicas won’t have red badges on the front wings. Those are only fitted to experimental cars, and the company is adamant that no exceptions can be made. We suspect Johnny English will be feeling rather smug about that. 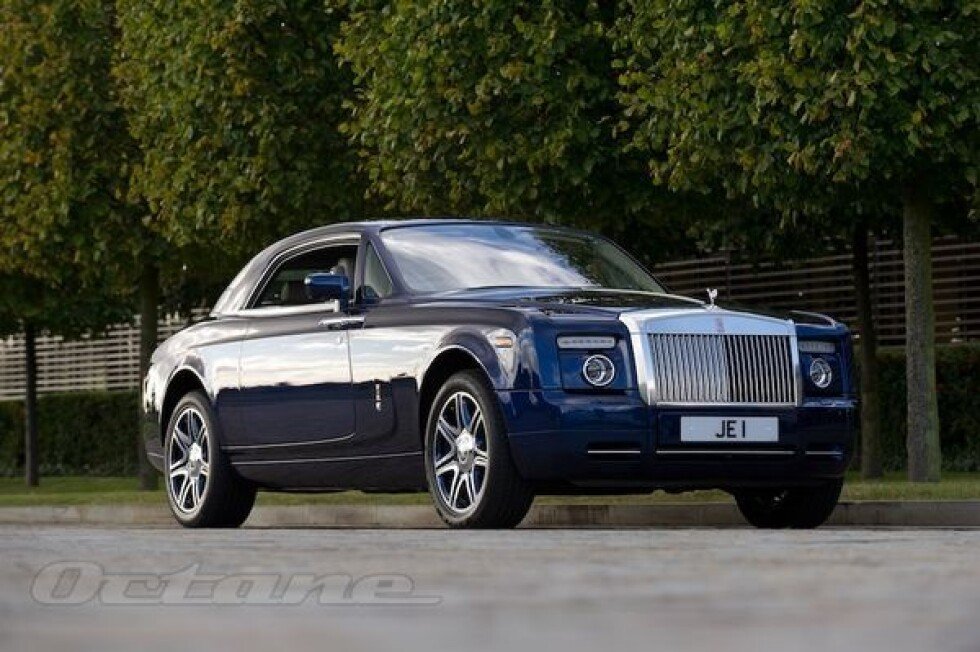