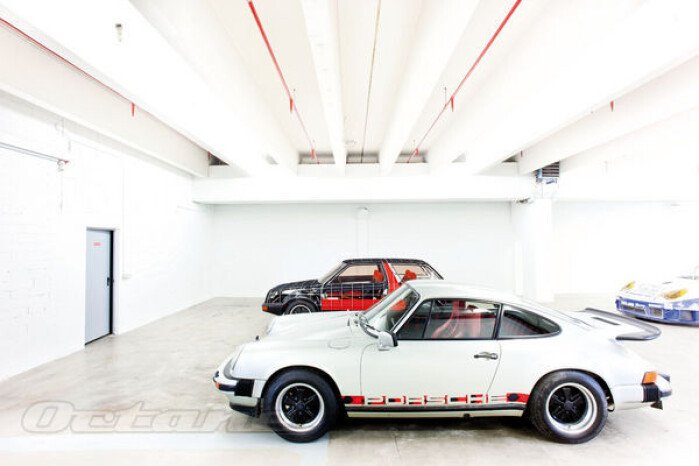 In 1949, Ferdinand ‘Ferry’ Porsche faced a dilemma. Recently returned to Stuttgart from the marque’s wartime retreat in Gmund, Austria (where his band of displaced workers had managed to cobble together 50 cars bearing the family name), he had to decide whether he should take a huge gamble and commit to series production. Ferry calculated that over the coming years, and with a little luck, the world market  could probably absorb 500 examples of his idiosyncratic little sports car. Back in those cash-strapped, war-scarred days, he would have been quite unable to conceive of the idea of accumulating 500 cars simply to display to  the public. But that’s the number of models – or 505, to be precise – that now comprise the Porsche Museum collection.

The magnificent multi-million-dollar museum that opened in 2009 has 85 cars on permanent display. An additional few dozen are at any given moment ‘touring’ the world on loan to dealers or attending classic car events and shows… but that still leaves around 350 vehicles that have to be stored. Until now, the cars have been scattered across several locations around Stuttgart, but late last year Porsche decided to concentrate its cars in one location. To that end, it renovated a vacant factory only a short distance from its Zuffenhausen production line and museum, in the adjacent suburb of Kallenberg.

To mark the occasion, we were invited to witness the arrival of some of Porsche’s little-seen gems as they were decanted into their new home from a fleet of covered transporters. The manufacturer likes to think of these machines as its ‘sleeping beauties’ – and beautiful they undoubtedly are. Even a battered World War Two Kubelwagen had a certain faded dignity about it, marred only by a (surely temporary?) set of incongruous chromed 356 wheels.

Now that, from a marketing point of view, the past has become part of the future, Porsche has adopted the policy of retaining at least one of each model that it produces – usually the first or last off the production line. This has resulted in the new storage facility being largely filled with gleaming rows of the more modern road cars, such as all the Carreras, from 2.7 to 4.0-liter, and all the 911 Speedsters, with a brace of 356 Speedsters to top and tail the set. Turbos and 959s feast the eyes, too.

The marque also retains many one-off ‘specials’ that were produced for members of the family, including Ferry Porsche’s 964 Speedster, finished in his favorite shade of ‘hunting green’. Another family car is the very first 911 Turbo, the personal transport of Louise Piech, Ferry’s sister and head of Porsche Austria. Still looking like new even now, the car was her birthday present in 1973 and, while discreetly devoid of a ‘Turbo’ badge, it makes up for its apparent understatement by being upholstered in a striking plaid cloth with the Porsche logo reversed out of a matching plaid side stripe.

Among the more intriguing never-before-seen one-offs are a couple of tantalising ‘what could have been’ prototypes. The pretty 984 roadster, although it failed to reach production, looks ready to drive away. Developed in the late 1980s as an ‘entry level’ Porsche and replacement for the 924, it featured a retractable metal hardtop and was to be powered by a flat-four air-cooled engine – echoes of the 356 – and would have made a more practical ‘Speedster’ of its day. Front-, mid- and rear-engine locations were considered (the car here being mid-engined), before the project was abandoned as being too expensive to meet its entry-level price point.

Perhaps even more of a loss to hardcore Porsche fans was the 965. The sole remaining example of 16 prototypes, looking somewhat scruffy and unimposing in flat-black paint, holds a surprise under the lid: a water-cooled V8. The 965 was intended as a sort of ‘poor man’s 959’ (everything is, of course, relative) which the company could actually sell for a profit rather than a loss. Development started in 1984, a period at Porsche that coincided  with much indecision over the company’s future direction. This indecision carried over into which engine should power the 965, and slowed the car’s progress. A twin-turbo water-cooled version of the flat-six was considered, as well as a detuned version of the V8 racing motor that Porsche had developed for Indianapolis. Levering the V8 into the back  of the 911 must have required shoehorns of formidable strength, as there is not even  a millimeter of spare space to be seen.

We’re told that, perhaps not surprisingly, ‘cooling was a problem’ and that there are ‘radiators and fans everywhere’. All of which issues I have absolutely no doubt the Porsche engineers eventually could have resolved, but the plug was pulled, again for projected cost reasons, before the 911 ‘Indianapolis’ had a chance to prove itself. A great pity, as I’m sure that V8-loving Americans would have queued round the block for a hot-rod 911.

Far more presentable than the 965 and  also with a touch of the US about it, even  if unintentional, is the ‘Aerodynamik Weltrekordwagen 911’. Despite its fastback looks the original 911 was not exceptionally efficient aerodynamically, with a drag coefficient knocking on 0.40. By the launch of the 964 in 1989 (badged 911 Carrera 2 or 4), careful wind tunnel work had lowered that to a more respectable 0.32, but with German makers and Audi in particular promoting the aerodynamic efficiency of their cars, Porsche decided to see how low it could go.

A smoother front end with flush headlights, plus flush-fitting glass, the removal of the rain gutters, an extended rear wing and projecting wheel discs to reduce turbulence produced a remarkably good-looking car with the feel of a Bonneville salt flats racer. It achieved a remarkable ‘World Record’ drag coefficient of 0.27; the current 991 has a Cd of 0.29.

Another exercise in aerodynamic efficiency revealed for the first time is a 924 ‘mystery car’. On the day we’re there, the museum staff are still researching the background to this odd-looking 924 that they had ‘discovered under blankets hidden behind a pile of packing cases and crated engines’. When you have 500 cars to look after, mislaying one is perhaps understandable. According to that guru of all things Porsche, the estimable Karl Ludvigsen, work on this hot-rod 924 started in 1976 and progressed into 1977. The purpose was to raise the profile of the 924, after the somewhat underwhelming response to its launch, by attacking the 10,000-mile World Endurance record just set by the Mercedes-Benz C111.

Extensive work in the Volkswagen wind tunnel resulted in a significant reduction in the 924’s Cd, down from 0.36 to 0.268. Meanwhile, as one group of engineers was reducing the car’s drag, another set was pumping up  the horsepower. A massive turbo, exhausting via the shortest route through a ‘nostril’ in the front wing, boosted output of the 2.0-liter four from 125bhp to 255bhp at, as Ludvigsen puts it, ‘a conservative 5,500rpm’. With a non-stop 10,000-mile target this was probably deemed enough horses to guarantee reliability, as later racing versions would eventually pump out  as much as 420bhp! The long-distance intent of this unique 924 is evident in the stripped-out interior, with rollcage and enormous fuel tank filling the rear deck space.

Among the slumbering beauties in the collection there are, of course, several  retired racing thoroughbreds. The diversity  of Porsche’s history is well illustrated by  the proximity of a pure white, eight-cylinder, short-tail 908 to a fire engine red, top-of-the-range, four-cylinder diesel Master tractor –  a horsepower difference of some 250 and  a potential speed difference, should they ever meet on the Mulsanne Straight, of 180mph. The 908 couldn’t pull a plough, mind.

One beauty that looks a little faded and worse for wear turns out to be arguably  the most important racing Porsche of the  firm’s modern era. With weather-worn paint, cracked and crazed bodywork and currently minus its eight-cylinder engine, this is the so-called ‘Ollon-Villars’ car. Hillclimb events were always a much more important part of the European racing scene than the British one (in Europe the ‘hills’ tended to be mountains and the courses covered miles rather than yards), and in the 1965 season Ferrari was getting to the top faster than Porsche.

In an attempt to regain the initiative, Ferdinand Piech – grandson of Ferdinand Porsche, and the new, aggressively dynamic and talented head of the experimental department – rushed through a fresh design from drawing board to track in only three weeks. The then-current racers were based  on the box-section chassis of the 904, designed by his cousin ‘Butzi’ Porsche, and powered  by a flat-eight engine. Piech’s new spyder abandoned the 904’s chassis and returned to the spaceframe construction that had featured on the very first Porsche roadster in 1948, and in one form or other in most of the firm’s racing cars through the 1950s and early ’60s. Because of the lack of suitably wide 13-inch diameter wheels in Germany, a set of rims, hubs, brakes and suspension uprights were bought directly from the Lotus team at the German Grand Prix, which took place as the company was building the car.

The model’s first appearance, only days after its completion, was at the 8km Ollon-Villars hillclimb in Switzerland – but despite the enormous effort, Gerhard Mitter was still beaten into second place by Ferrari. However, the lessons learnt with the new car were  put to good effect in the six-cylinder 906 that was under development at the same time. PiΫch’s constant development of the spaceframe formula evolved, in only a few seasons, into the all-conquering 917. The Ollons-Villars spyder was rebodied as a lookalike of the 906 coupé for the 1966 season, before being pensioned off.

Once the technicians have wheeled the new arrivals into their designated slots in the avenues of cars, the burble of activity dies away and the great hall falls into silence. As we leave, with the sun low in the sky and its last rays bathing the gleaming bodies of hundreds of Porsches in a warm glow, it’s easy  to see how the manufacturer thinks of these models as its ‘sleeping beauties’. Sleeping for now they might be, but at a rough guess there is 100,000bhp just waiting to burst back into life at the merest hint of a kiss. I can feel my lips puckering at the thought. 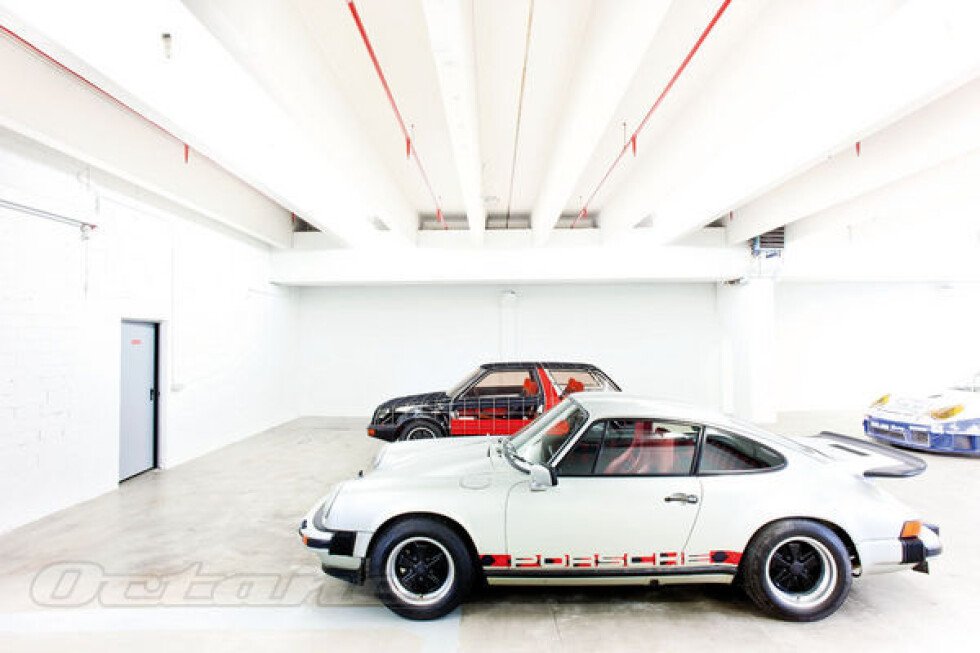