How to Build a Ridler Winner 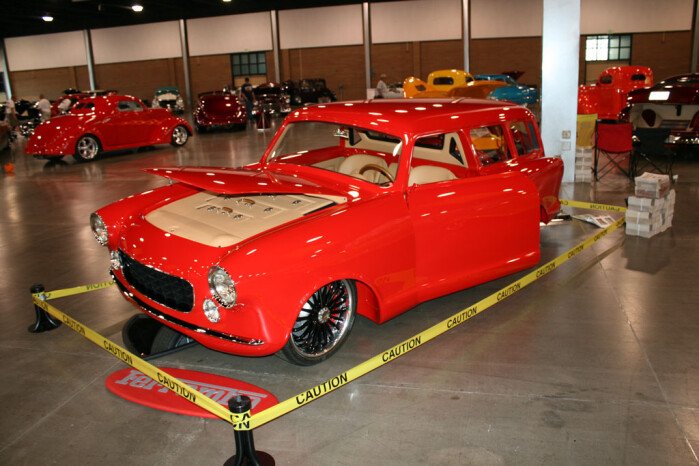 The Ridler Award, which is given out annually at the Detroit Autorama, has become the premier acknowledgment of hot rodding excellence. To even be considered a contender for the award is beyond the scope of cars universally described as phenomenal. To be one of the “Great Eight” semi-finalists is an incredible achievement, but to win among those ultra high-level cars puts one at a loss for superlatives.

The Ridler Award (the full name is the Don Ridler Memorial Award) honors Don Ridler, a highly respected fifties promoter who helped make the Detroit Autorama the success it is today. The award is only open to cars making their first public show appearance. The three main parameters are excellence in creativity, engineering, and workmanship.

The competition for the Ridler Award is fierce. Many extremely talented builders try for years with multiple cars to win the Ridler. But Mike Warn, Tim Divers, and the crew at Divers Street Rods in Startup, Washington won on their first try in 2008.

It takes very deep pockets to compete for the Ridler Award. Fortunately, after selling Warn Winches, Mike Warn was in a position to fund Tim Divers’ idea of a perfect hot rod. Tim had built other hot rods for Mike, and it was on one of his visits that he learned about an unfinished 1960 Rambler American station wagon that was for sale.

The little white wagon had been a long-time back-burner project of another Divers Street Rods customer, Craig Lang. The car was in the early stages of getting the Pro Touring treatment. It had an Art Morrison chassis with air suspension. It was going to be Chevy-powered, fitted with huge alloy wheels and low profile tires, and would have been a very slick car.

One of Mike’s businesses is an exotic car dealership, Gran Prix Imports, in the greater Portland, Oregon area. During a discussion of how to make the Rambler unique, Tim Divers suggested dropping a Ferrari engine in the back seat. Mike bit and was able to find a wrecked 2002 Ferrari 360 Modena coupe, which became the donor vehicle.

The finished Ferrambo is the work of many highly skilled craftsmen. The key players in the construction of Ferrambo were shop owner and head fabricator, Tim Divers; his brother Scott, who builds phenomenal interiors and is a very talented designer; and Jim Lykken and Shawn McNally, who were responsible for the jewel-like paint.

Typical car features focus on the finished hot rod, but we’re running these construction photos to provide insight into the incredible amount of work required to build such a fantastic piece of rolling art.

The former rear seat and cargo area of Mike Warn’s 1960 Rambler American station wagon is now filled with a 2002 Ferrari 360 Modena 3.6-liter V-8 and its six-speed transaxle. A glass and metal firewall separates the engine compartment from the passengers.

The side profile of the Ferrambo is very clean. Outwardly, the car is very simplistic, but underneath the PPG Ferrari Russo Corso Red paint is a complex powertrain. Scott Divers designed the spline-drive custom-built aluminum wheels. The tires are Pirelli P-Zero 225/35-18s (front) and 295/30-20s (rear).

The interior is flawless. It looks too nice to sit in. Scott Divers designed and constructed the very simple yet incredibly elegant interior. The goal was for it to resemble a vintage Ferrari interior. The beautiful, buttery upholstery is saffron fine Scottish leather.

The dash shape is the basic Rambler design, but highly refined and fitted with an LED speedometer. The teak steering wheel was handmade. The horn button matches the shifter knob for the gated 6-speed. A simple master control switch and engine start button resides on the custom console.

The area that once housed the lowly Rambler engine now appears to contain a trio of custom made suitcases (covered with the same leather as the interior). The “suitcases” are merely covers for the fuel tank, clutch and brake master cylinders, and radiator filler. The forward suitcase handle releases the hood support.

The highly coveted Ridler trophy and smaller Ridler Builder’s trophy rest on a workbench at Divers Street Rods. How coolly casual is that?

This is a very early photo of the 1960 Rambler station wagon, when it was sitting in a back corner of Divers Street Rods. This was before Mike Warn took ownership and elevated the project to new heights.

Before the Ferrari drivetrain idea caught on, the Rambler was on its way to being a very nice, but relatively ordinary, Pro Touring car. Even such an “ordinary” project would have been impressive given the high quality of work turned out by Divers Street Rods.

Back in its Pro Touring phase, the body was gutted and mated to an Art Morrison chassis with a 9-inch Ford rear with four-link control arms, a Panhard bar, and air suspension – all contributors to that desirable ground scraping stance.


.
Here is a shot of the Morrison front suspension with tubular A-arms, air bags, and rack and pinion steering. The body was welded to the outer frame rails.

Once it was decided to use Ferrari power, the Ford 9-inch and related components were ditched. This is early in the fitting of the Ferrari engine and transaxle. The factory Ferrari mounting cradle was used to determine the proper engine location. The transaxle comes almost to the rear crossmember. If the Rambler were any shorter, the drivetrain wouldn’t fit.

Two large tubes were fabricated to supply fresh air to the engine. The air is picked up via the motorized rear windows. During construction, panels were temporarily secured with Cleco fasteners. An immense amount of finish bodywork was required between this stage and the final product.

The former home of the 90hp six-cylinder engine is now fitted with a custom aluminum gas tank. The filler tube isn’t installed here, but connects to a flip-up fuel door on top of the right front fender.

This shot shows the Ferrari front suspension during the mockup stage. A section of square tubing was used in place of a shock absorber.

The original tailgate/liftgate combo was fused into a single, side-hinged door. A stylized “R” was cut into the door skin.

Custom hinges were fabricated for the rear door. Hidden by body panels in the finished car is the actuator and power ram for the door.

As high tech as the Ferrambo is, some common items were employed during the mockup stage. Here, chunks of 2x4, 2x2 and plywood were being used to determine the location of the gated 6-speed Ferrari shifter.

The front fender openings were custom made to mimic the shape of the rear openings. Also, the lower front valence was reshaped. The original Rambler wheel arch is shown on the floor. The brakes, rotors, and wheels from the donor Ferrari were very impressive, but not enough for a Ridler winner.

The Rambler dash shape was retained, but a custom fold-down door was fabricated to hide a Motec instrument panel. A Motec CPU is used to manage the engine instead of the less reliable Ferrari electronics.


This shot was taken when the front fenders, headlights, wheel openings, and grille were still in their original Rambler form. Originally, the whole nose was much flatter.

The goal was to make the Rambler look more like a classic Lusso Ferrari. To do so, Divers Street Rods extended the front fenders and headlights, extended and reshaped the grille opening and hood, and build an egg crate style grille. Poster board was cut and fitted to help during the fabrication stage. At this point, the non-rolled original Rambler valence was still in place.

The nose transformation is much farther along here. The new rolled valance is taking shape and a small section of the custom bumper is being checked for curvature. A lot of work is still needed on the right fender.

The final body shape is evident here, although a great deal of metal massaging is still needed.

Advertisement
×
How To Build A Ridler Winner 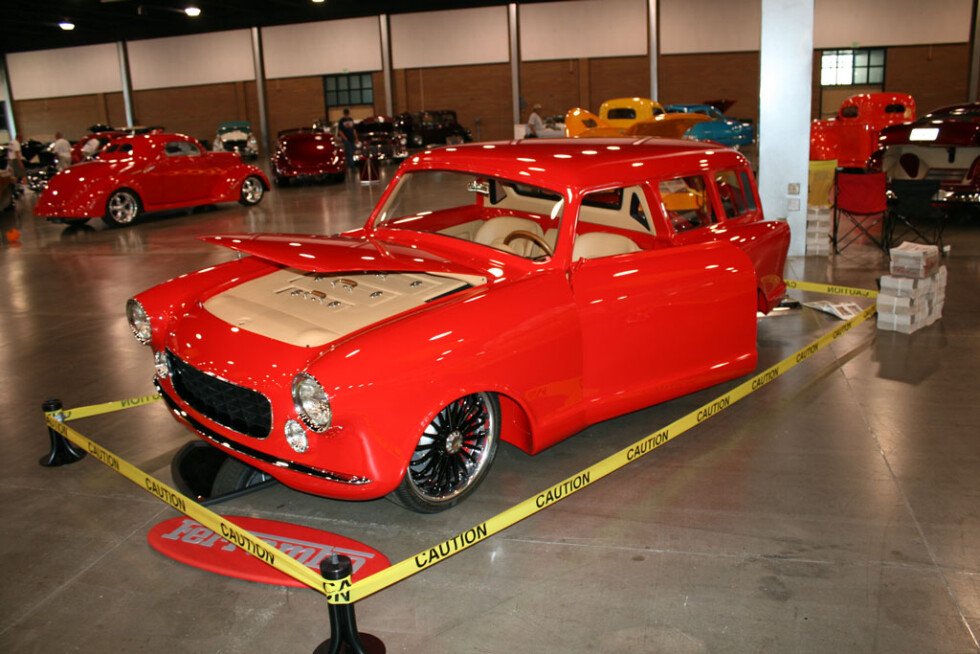