How It Works: Two Stroke Engines 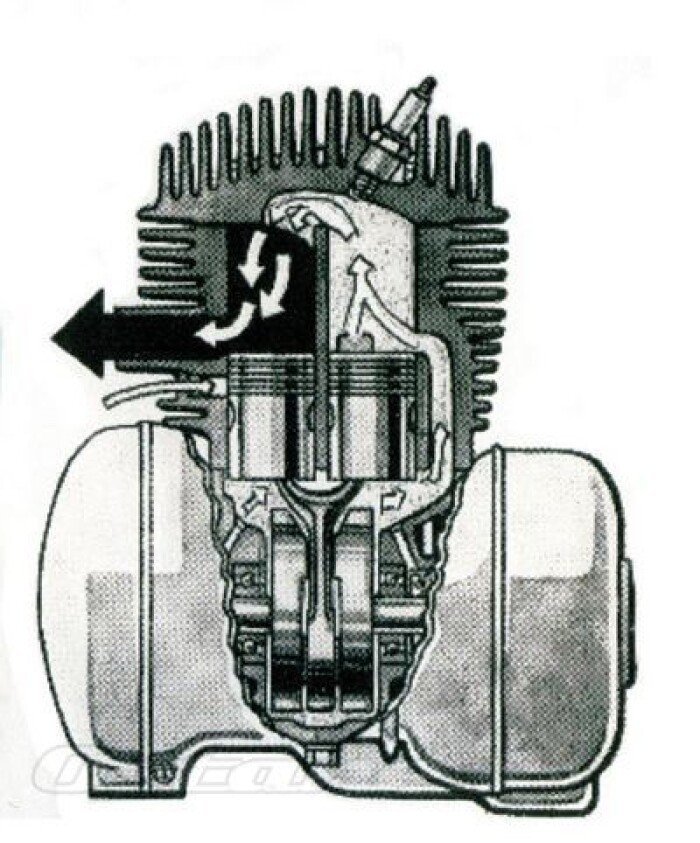 The basic principle of any internal combustion engine is to put fuel mixture into a container and make it explode, harnessing the power of that explosion to create motion. Of course, there are many side considerations, like cramming as much mixture in as possible to get the most power from the explosion, making it as explosive as possible by compressing it and getting the spent mixture out as efficiently as possible to clear the way for the new charge; but the bit that actually gives the power is the explosion.

In a four-stroke engine, the crankshaft turns twice and the piston goes up and down four strokes for each explosion – and a whole symphony of other mechanical parts (camshafts, rockers, inlet and exhaust valves etc) clatter around, all consuming the energy of that one explosion.

So, if there was a way for the explosion to happen with every revolution of the crankshaft – every two strokes (one up, one down) of the piston in the cylinder AND to do away with all those extra mechanical components, surely it would represent a huge reduction in wasted energy? Air cooling can be used more successfully too, as only the cylinders need to be cooled.

Certainly the power to weight ratio of air cooled two stroke engines is vastly better than four strokes, especially with very small capacities, and they are much cheaper to manufacture. That’s why you’ll find tiny two strokes in everything from remote control aircraft to chainsaws, hedge trimmers, lawnmowers, jet skis, dirt bikes and mopeds. They can be really tiny – the Cox Baby Bee model aircraft engine has a capacity of 0.8cc and weighs just 64 grams.

But the three "e"s – efficiency, economy and emissions – are the two stroke’s downfall, simply because its design involves inherent compromises that can only be avoided with complex extra engineering.

In a conventional two stroke engine, holes in the side of the cylinder (‘ports’) allow the air/fuel mix in and the spent mixture out. These are invariably placed opposite each other and they are opened only when the piston reaches the lowest point on its stroke. The crankcase (where on four-strokes oily gases just sit around doing nothing useful) is a vital part of the engine. On a four stroke engine, crankcase breathing is a problem, requiring recycling systems to avoid pumping oily fumes into the atmosphere. On a two stroke, however, the crankcase is sealed – for each cylinder – so that when the piston goes up, a vacuum is created in the crankcase below it. A simple valve (usually a reed valve) in the side of the crankcase, where the inlet manifold/carburettor is bolted on, opens and sucks the fuel/oil/air mix into the crankcase. As soon as the piston reaches the top and there is no more vacuum, the valve closes and, as the piston is forced down again by the explosion in the cylinder, the fuel mix is compressed. Just as the piston comes to the bottom of its stroke, it uncovers the inlet and exhaust ports in the side of the cylinder. The pressurised fuel mix bursts into the cylinder, forcing the exhaust gases out of the exhaust port on the opposite side.

Most two stroke engines use total loss lubrication: oil is included in the mix, in a measured proportion, to provide lubrication for the crankshaft, bearings, cylinder walls etc, negating the need for an oil pump or a sump full of oil. This again makes the engine much simpler, lighter and cheaper, as well as being able to operate at any angle – but also leads to pollution from the oil that enters the cylinder and is burned, causing a smoky exhaust. Modern two-stroke oils, especially synthetics, reduce this tendency significantly and are efficient in much smaller proportions than 50 years ago; two-stroke mixes of 50:1 are common now, whereas 16:1 was not unusual in the past.

Though careful design of the piston and combustion chamber minimizes mismatch in volumes, or poor gas flow leaving exhaust gases in the cylinder, it is inevitable that some new fuel mix may be lost down the exhaust port, hence the relatively poor economy of two strokes, especially when tuned for ultimate performance.

This type of two stroke engine was developed in 1889 by Englishman Joseph Day, though the first two stroke engine was designed by Scot Dugald Clerk in 1878. His design incorporated valves in the cylinder head operated by a camshaft. At the end of the power stroke, both valves open together and fresh air is forced in by a supercharger, pushing the exhaust gases out at the same time. The air is then compressed and, as the piston approaches top dead centre, fuel is injected, which ignites in the same way as in a four stroke diesel engine. The Clerk Cycle engine found favour for large engines powering ships and trains, and was also built by General Motors’ Detroit Diesel Company. The most powerful diesel engine in the world is the Wartsila-Sulzer in-line 14-cylinder turbocharged two stroke ship engine of 25,480 liters, producing 108,920bhp and an incredible 5,608,312lb ft of torque at 102rpm.

The best-known users of two stroke engines in car manufacture include the Sachsenring Trabant, of which some three million were built between 1957 and 1988, Saab, Suzuki, Subaru, DKW, Auto Union, Wartburg, Syrena and microcars such as the Berkeley, Frisky and Messerschmitt. With electric starting, it is possible to make the engine run in the opposite direction (albeit with retarded ignition timing): this is ideal for providing reverse gearing in microcars where weight and cost would otherwise make it prohibitive.

Driving a two stroke-engined car is very much like driving a four stroke in most respects. Two stroke engines are usually of small capacity and pull best at higher revs; it’s most important not to use engine braking when descending hills, however, as high revs with the throttle closed will starve the engine of oil if it relies on fuel/oil mix for lubrication and could do serious damage.

Two strokes have been abandoned in mainstream car manufacture, but that’s not to say they won’t return. Chrysler’s lean burn direct injection opposed piston two stroke came close to being launched in the 1997 Neon. Emissions have improved dramatically with recent developments by boat and snowmobile engine makers, whose engines now use direct injection where the fuel is injected into the combustion chamber towards the end of the compression stroke, after the exhaust port has closed, preventing loss of unburnt fuel. They also use pressurized lubrication to reduce oil burning and excess smoke, usually still a total loss system supplied from a separate oil tank.

The benefits of two stroke diesel engines are also increasingly recognized: compression ignition removes the need for spark plugs, distributor etc and gives a more complete burn, as there is no ‘flame front’ that you get from spark ignition – all the fuel ignites spontaneously. Two stroke diesels usually employ a supercharger or turbocharger to force air into the cylinder and direct injection to add the fuel.

Lotus Engineering’s monoblock single-cylinder ‘Omnivore’ two stroke, unveiled at this year’s Geneva Motor Show, is designed to run on sustainable alcohol-based fuel. As well as direct fuel injection via supercharger and compression ignition (except at idle, when a spark plug is used), the engine features a novel charge trapping valve in the exhaust port, to permit variation of the exhaust opening point and control of exhaust flow, minimising fuel charge loss through the exhaust. It also features a variable compression ratio achieved by a puck at the top of the combustion chamber, moved up and down according to the load demands: Lotus has found this to be a great benefit in efficient combustion of renewable fuels. The engine has a conventional wet sump. The two stroke’s not dead yet! 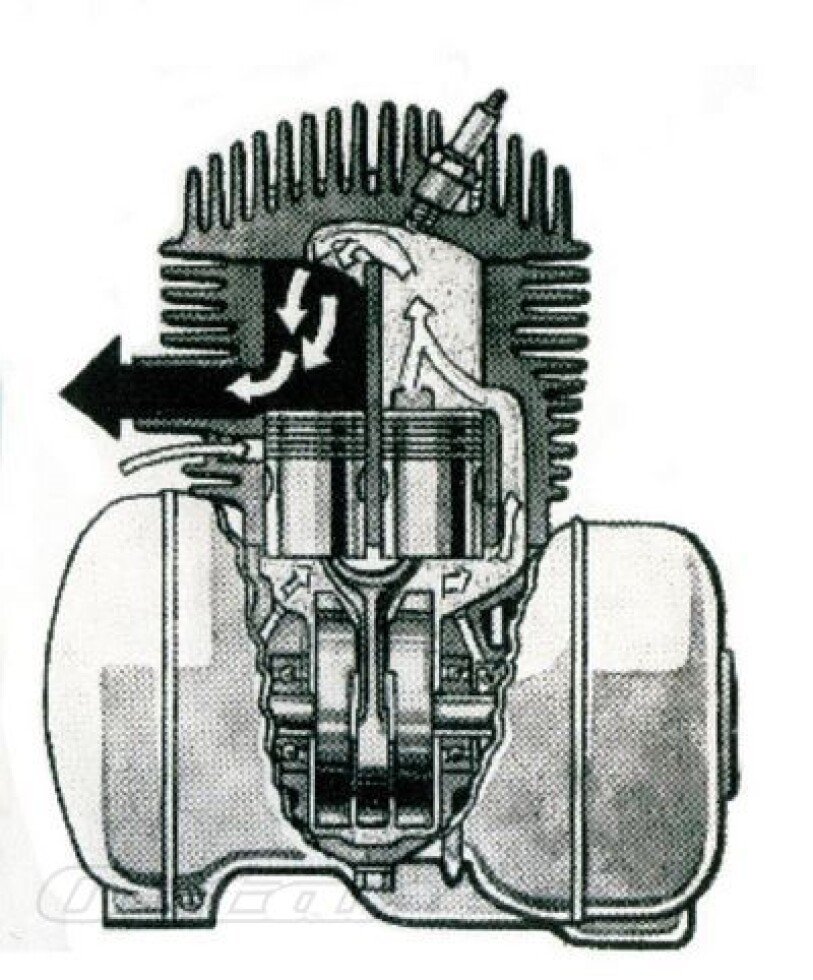