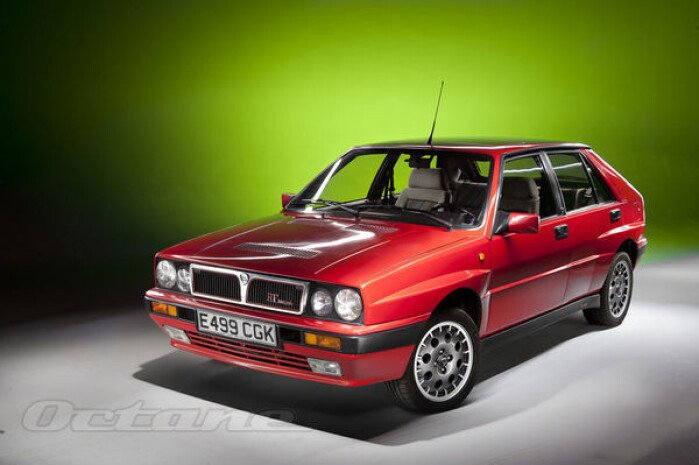 Now here’s a sobering thought. Lancia’s Delta arrived in this world a third of a century ago. Yet in its final form, the Integrale Evo 2 launched in 1993, it was thought of in the same breath as modern objects such as Mitsubishi Evos and Subaru Impreza Turbos. It was the four-wheel-drive, turbocharged, World Rally Championship aura that forged this common bond, shrunk the decades and makes some of us still think of an Integrale as an almost-modern car.

It isn’t, though. The underlying Delta style is archetypal 1979 Giugiaro origami, all clean-cut edges and tidy geometry. Original Deltas are rare now, and all but forgotten. And Integrales, with their wheelarch blisters, spoilers and valances, draw your eye via these addenda, leaving the primordial Delta shape to be overlooked, simply a framework on which to hang these rally-flavoured bits. You barely even notice that it has four doors (plus a tailgate, obviously).

An Integrale isn’t ageless – it’s far too angular for that, and its proportions are too normal relative to the safety-driven distortions of modern machinery – but neither does it seem obviously dated. The same goes for the way it drives, especially an Evo version.

Tracking the evolution of the driving characteristics over the years, it’s best to begin with the pre-Integrale Deltas, maybe even with pre-four-wheel-drive ones – so long as they have a turbocharger under the hood and HF in the title. The first Delta HF Turbo was still fuelled by carburetor and was frequently to be seen in Martini livery in white with red and blue stripery; in fact, the first words I ever wrote for the now-defunct Motor magazine were the captions for our 1984 road test of just such a Delta.

Its engine was of 1.6 liters rather than two, but it was still the versatile Lampredi-designed twin-cam. The underpinnings were those of a Fiat Ritmo/Strada, with struts all-round, located at the back by parallel arms and radius rods, and a fine and fluent machine it was once past the chasm of turbo lag. It made XR3i and Astra GTE rivals feel inert and clumsy.

That HF Turbo soon gained fuel injection, and then – with an eye to the WRC, following the abolition of the Group B missiles – Lancia gave it four-wheel drive and a 2.0-liter, 165bhp version of the Lampredi engine. The Delta HF Turbo 4WD, identifiable by its pair of tailpipes, used a Torsen rear differential and an epicyclic center diff with a viscous limited-slip system that split the torque, nominally, 56% front and 44% rear.

Like the Integrales that followed (all officially with a lower-case initial ‘i’, incidentally), the HF 4WD came with left-hand drive only. But any overtaking impediment this presented was more than made up for by what seemed, at the time, a lot of pace. The example I drove, in the UK but on Italian plates, was painted a metallic grey-green so it blended nicely into the background.

Good thing too, because it could cover ground extremely quickly, with an elastic adhesion to the road the like of which I had not experienced. Ultimately it would understeer under power on a slithery road, much like a contemporary Audi Quattro, but the Delta felt much lighter on its feet than the heavy Audi and it was a superior companion on a twisty back road.

The turbo lag was much less obvious than in that first HF Turbo too, thanks partly to the fuel injection’s proper mapping but mainly to the larger engine capacity, which improved off-boost thrust. At the other end of the turbo’s activity scale was the facility for a brief period of overboost in foot-down mode, upon which an overboost light appeared on the dashboard and whatever had been holding you up reappeared in the rear-view mirror. It was monstrously good fun, all accompanied by a turbo whistle and a crisp, hard-edged exhalation from those twin exhausts.

Already the rapid Delta was the keenest, most visceral and most unassailable hot hatchback on offer, because at the time no-one else offered anything quite like it – especially not with a Delta-rivalling tally of rally wins. But in 1988 the Motor office car park found itself host to a revised version, now with wider wheels hiding under arches blistered like a Quattro’s, and intriguing louvres in the hood. Bigger brakes lurked within those wheels, while under the hood a larger turbocharger and associated intercooler boosted power to 185bhp, with durability mods to keep it all together.

Here was the first HF Integrale, this particular one in bright red and causing much salivation among the staff. Demure Delta-ness was really fading into the background as eyes focused on the arches and the handsome wheels. The drive home was joyous, the Integrale feeling fundamentally like the sharper, faster, grippier and even more road-annihilating HF Turbo 4WD that it is. The ultimate characteristics were similar, including the very benign handling balance and astonishingly informative steering, but for the most part it simply felt glued to the road as the power poured forth. Torque steer just didn’t happen, traction was practically unbreakable.

Somehow the Delta’s rectilinear dashboard still managed not to feel dated, because it was so resolutely functional. The fabulous grey Alcantara Recaro seats with their multicolored diagonal stripes on the central panels were carried over from the HF 4WD, along with the perfectly sized three-spoke steering wheel; there was none of the dourness of fast German cars here.

However, the demands of competition meant that Group A rally cars had to evolve. And that meant the road cars had to evolve too, to homologate the rally cars. For ’89 the Integrale got 16 valves and a hood bulge to accommodate the resulting bulkier cylinder head, wider wheels, a change to a rear-biased (47:53) torque split and a power rise to 200bhp. I’d moved to Performance Car (forerunner to Octane’s sister magazine Evo), and we raved about this latest version with its yet greater pace and the way it trimmed the last vestiges of understeer until physics eventually reasserted themselves.

Here lay the beginnings of a new kind of ability to scoop up bendy roads and spit them out, the kind of invincibility people usually associate with the Mitsubishi Evo/Subaru Impreza flavour of road going rally car. But Lancia did it first, with a dynamic efficiency that startled me each time I drove one.

The next evolution really was called Evoluzione, as revealed in late 1991 with 210bhp, a further-widened track with new front strut mounts, broader arch-blisters, and new wheels that resembled those of the rally cars. Speed capabilities rose accordingly, along straights and through bends alike, but the subtlety of steering and handling was being smothered by the sheer forces involved. As a basis for a rally car the Integrale Evo was clearly the way to go, but as a road car it had lost some of its lovely transparency and fluidity. Finally came an Evo 2 in 1993, with 215bhp despite its catalytic converter.

One oddity I drove was an original-type 8V that had been converted to right-hand drive, using a regular Delta steering rack because the quicker Integrale item was never made in right-hand-drive form. And thus was a key part of the Integrale’s appeal lost: the converted car was as quick and adhesive as ever, albeit with a ride wrecked by ill-judged aftermarket lowering springs and dampers, but it lost the wonderful wrist-flick agility and fabulous communication in the fog of wheel-twirling.

Another was a curious amalgam of the Fiat Auto components cupboard, the Alfa 155 Q4, launched at the same time as the surprisingly good 164 Q4 in order to give the illusion of joined-up Q4 thinking. The 164 was the proper thing, a regular 164 with extra drive to the rear wheels, but instead of concocting something similar for the 155, Fiat took the easy route. This involved the insertion of, broadly, a complete Integrale Evo engine and transmission in the 155’s body, creating an under-developed mongrel with a shocking understeer habit and no detectable Alfa heritage. Launched in ’94 around when Integrale production ceased (and with it Lancia’s official presence in the UK, as the Integrale was the last representative of the marque here), it was a short-lived model and rightly so. We’ll forget that one, then.

So which was my favorite Integrale? Objectively it should be the first 16V, but I still nurture an affection for the original 8V, which seemed so muscular back then yet seems so paradoxically delicate now, in this age of automotive excess. The 8V – subtle, supple, talkative, always enthusiastic, never petulant –  blew me away in 1988 in a way no Audi Quattro has ever done before or since. If I drove one now, I expect I’d feel just the same. 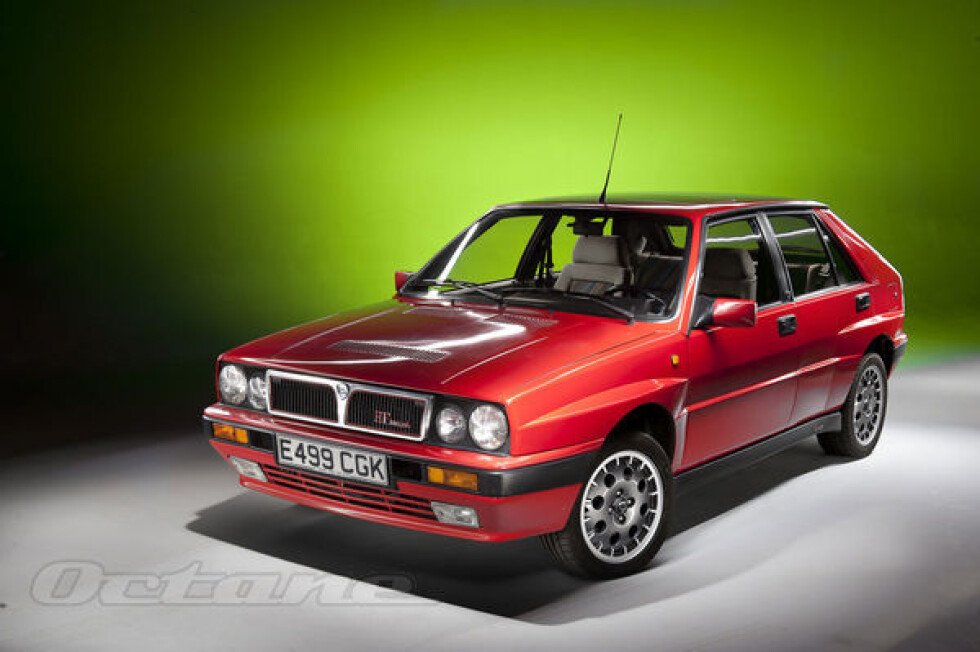