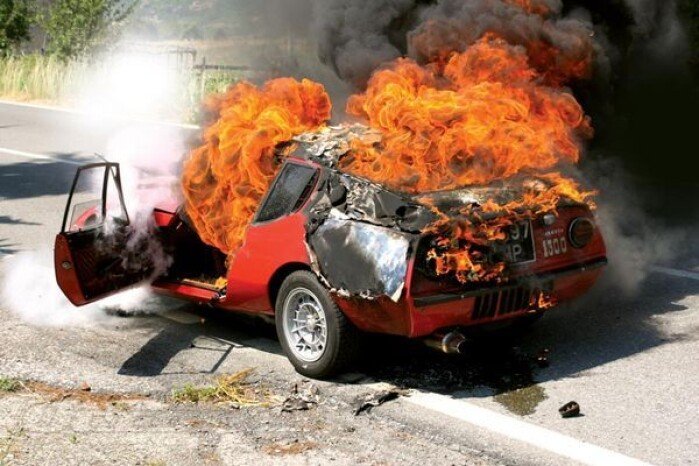 Accident damage, unless massive, can be repaired. But if fire takes hold of your car it will destroy it. With so many flammable materials and fuel sources, fire rips through a car in minutes and, by the time the fire brigade arrives, it will be unrestorable.

Fire requires two things: something flammable, such as fuel, and a source of ignition. Gasoline is the obvious scapegoat for vehicle fires, but it’s often not the original source. For example, tip a few drops of gasoline on a hot exhaust manifold and usually it will harmlessly evaporate. Tip a few drops of brake fluid and it may burst into angry flames – at least, that was the case a decade ago. Since then, most brake fluid makers have taken note and changed their formulation; but have you changed the fluid in your brake system to a non-flammable type?

Rubber and some plastics burn strongly, while oil (engine or diesel) requires little encouragement to join in. Paint burns well too, so in the end it’s only the metal parts of the car that won’t join the party – unless you have magnesium, in which case watch out, as it’s the most intensely flammable of all metals. And the fact that steel doesn’t burn is small consolation, as the intense heat of a car fire invariably distorts and weakens it.

Start with your fuel system. Check the tank is dry, secure and rust-free. If it’s rusty, replace it or get it repaired (don’t tip it out and weld a patch on: a tank full of gasoline vapor is a bomb). For competition, incredibly strong fuel cells are required, with impact protection – if your fuel tank is in a vulnerable position, consider replacing it with a fuel cell.

Check the filler pipe, overflow pipe and filler cap seal for cracks or crumbling: if you find any, replace. Then trace the pipes from the tank to the engine, all the way through, for crumbling or hardened rubber/plastic and rusty metal. Unleaded fuel can make old plastic and rubber pipes go hard and crack, so replace any suspect pipes before it’s too late.

Check the fuel pump for leaks – remember that classic electric pumps have points which spark, not a good thing to have close to gasoline vapor. New seals/diaphragms may be all that’s needed to be gasoline-tight again; and the same applies to the carburetors, or fuel-injection systems. Be particularly sure that the pipes taking fuel into these units are secure. If a fuel pipe is chafing somewhere, replace that section and shield it so it cannot chafe again.

Fuel-injection piping contains high pressure – the tiniest pinhole will send a jet of fuel right across the engine bay – so replace with the correct high-pressure injection hose at least every six years; don’t wait for it to start leaking because, when it goes, it often goes in a big way.

Make sure you have adequate air filtration or, if you run without an air filter, that nothing flammable is within a foot of the air intake: a backfire can send flames shooting out. Think about the exhaust system too, especially if you have a catalytic converter. This should be adequately shielded, as fires have started when a low car with a red-hot cat is left parked over long dry grass or leaves.

Electrical shorts are even more likely to cause fire than fuel leaks. Give them a chance – dry, fraying trim nearby, plenty of wires with flammable rubber sheathing, let alone a bit of gasoline or vapor – and they will quickly turn into a major conflagration. Yet you can protect your car against them by using very simple devices: fuses. Many classic cars have no fuses at all, or just one or two: British cars were poorly protected well into the 1970s and the design of their electrical systems made them even more vulnerable.

Take the classic 1960s Lucas horn, with two terminals on top. Mounted low down, in line for frequent soaking, corrosion sets in around the upward-facing electrical terminals. Over time, they weaken and eventually vibration breaks them off. On many, the electrical current goes from the battery, in one side of the horn, out the other and then to the horn button, then finally to ground. This means that one of the terminals which eventually breaks off is live. If you’re unlucky, it will drop down onto the horn body or the chassis, make a connection to ground and proceed to burn out right back to the battery, setting fire to all the other wires along the way.

The answer is to add fuses to the electrical circuits of your classic. In-line components are good for some circuits, but you may be able to protect several circuits at once by putting a fuse box close to the regulator. Headlights used not to be fused because of the danger of all the lights going out suddenly if the fuse blows; if you are concerned, put an in-line fuse in the circuit to  each headlight.

While you’re working out where to put fuses (under the dashboard, if you’re worried about originality), check all the wires for signs of crumbling insulation, chafing on other parts and splitting or chafing where they pass through bulkheads.

You do carry a fire extinguisher in your classic car, don’t you? It is a very good habit to get into. An A-B-C rated extinguisher can handle most common automotive situations.

Different racing bodies require different sizes, but anything smaller than 5 pounds isn’t worth opening the hood for (and that’s another point: if you’ve got an engine bay fire, don’t haul the hood wide open, open it just enough to point the extinguisher in and give it a good blast before gingerly opening it a little wider). As a safer bet, go for 10 pounds.

Plumbed-in automatic systems, which usually operate via a plastic  tube that melts and lets the extinguishant out at the source of the flames, are a terrific asset: owners of valuable classics should seriously consider having such a system installed. The specialists below can advise on fitting. 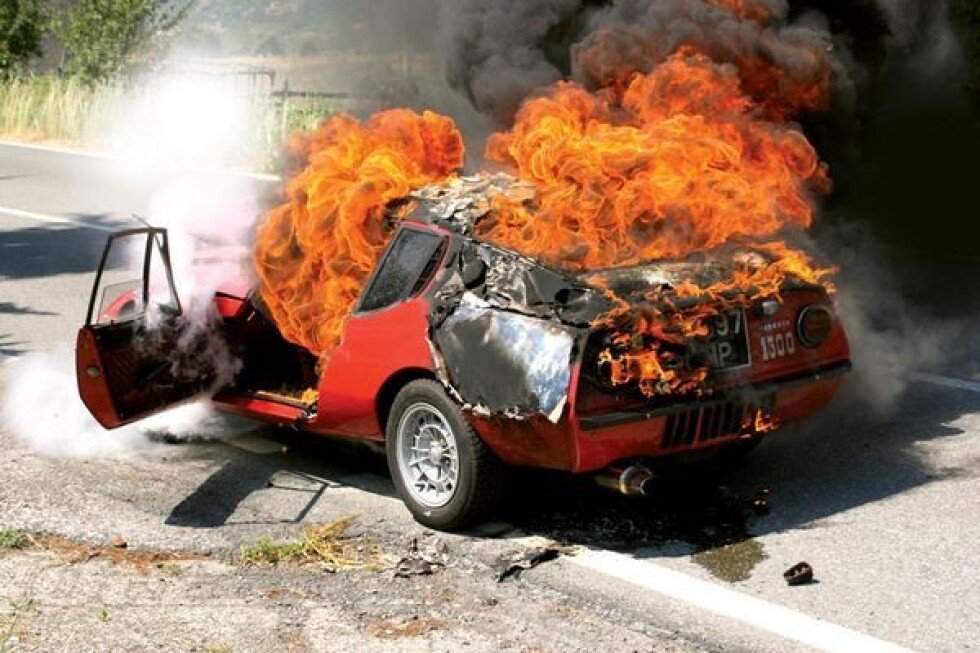