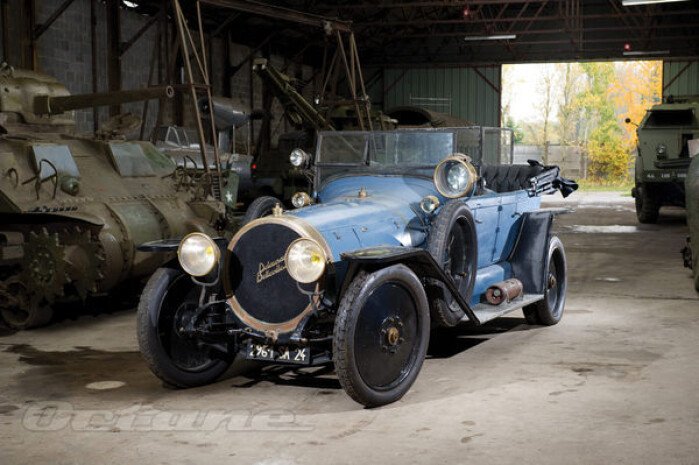 Sometimes, you have to get to know a person before you appreciate their – well, at the risk of sounding too Californian about it – their inner beauty. It’s the same with cars. I don’t think anyone could put hand on heart and say this Delaunay-Belleville is an elegant car. Impressive, yes; distinctive, certainly. But with its functional, flat mudguards and disc wheels that are doubled-up at the back to support its considerable avoirdupois, it might less charitably be described as a better-than-average looking camion. Spend a little time with the Delaunay, however – and preferably drive it – and then you might find yourself starting to fall for its attractions. Particularly when you hear its remarkable, romantic story.

The name Delaunay-Belleville doesn’t mean a lot to the British these days, but the situation was very different in the late 19th century. The Belleville company, as it was then, made steam engines and boilers, big boilers, and they supplied some of the leading navies of the world. And, of course, the navy that led them all was the British Navy. Belleville boilers went into  Dreadnoughts and even into the Royal Yacht Victoria & Albert.

All that experience with steam engines – and a canny move  by Mr D-B, who engaged the services of experienced motor engineer Marius Barbarou, formerly of Clément and then Benz – paid off, because even the earliest D-B cars were soundly engineered and featured pressure lubrication, a feature of the company’s steam engines but virtually unknown in the world of motor cars. The first Delaunay-Bellevilles were big, four-cylinder luxury machines, with 16, 24 and 40hp engines, and they found a ready market among the rich. Czar Nicholas II of Russia, one of the earliest petrolheads, was a patron, and as the historian David Burgess-Wise puts it, his fleet of Delaunays ‘…was serviced on the marble workbenches of the grandiose Imperial personal garages at Tsarskoe Selo and Peterhof’.

It was, of course, a similar story in Delaunay’s native France. With its eight-litre, six-cylinder engine, the 1913 Model O6 pictured here was the French equivalent of a Rolls-Royce Silver Ghost, and the size of a small charabanc – count the people in the black-and-white photo on the previous page; there are eight, plus the mechanic. Its first owner is unknown but in about 1917 it was bought by a Mr de Brou de Lauriére, whose family had invested money in the nascent Michelin business and become very rich as a result.  It’s been in the de Lauriére family ever since.

Monsieur de Lauriére gave the car to his young nephew, Pierre, who is behind the wheel in the old photo. The de Lauriére family had almost as many cars as they did houses, but even though the Delaunay was quite old-fashioned by the early 1920s, it was a favourite of Pierre’s and often chosen for long trips in preference to the 40hp Renault, the Panhard-Levassor, Clement-Bayard and Chenard-Walcker with which it shared garage space.

We know this because of a chatty article that appeared in a 1929 bulletin of the Automobile Club du Périgord, the region slightly more than halfway down  France where the de Lauriére family had its estate. Pierre de Lauriére drove out to meet members of the Club, who were on a touring holiday, in his ‘extraordinary, ancient, glorious and powerful Delaunay’. ‘I haven’t yet told you about Pierre de Lauriére’s Delaunay?’ exclaims the Club’s reporter in mock surprise. ‘Allow me to introduce it…’

We learn that when it was less than a year old, it was used to transport the then-President of France, Raymond Poincaré, across the Périgord, but by the time of writing in 1929 it had become a little cranky and was often hard to start, requiring passengers and passers-by to help push it: ‘That certainly got the blood circulating, but this hygienic exercise, when it had to be repeated often in summer, wasn’t without its drawbacks…’ The Delaunay’s outing to meet the Club members was probably one of the last duties it performed before WW2, when, along with all the other cars in the de Lauriére stable, it was laid up.

For rather longer than just the duration of the war, in fact. All the cars previously mentioned, plus a few later additions, such as a Bugatti Type 44, had their wheels removed to prevent the cars being stolen by Nazi soldiers. And they remained that way until the garage was reopened – in 1984.

Bugatti specialist Francis Courteix was given the job of recommissioning the cars for Pierre de Lauriére’s son, Patrick. ‘The family owned lots of properties in the area,’ he says, ‘and we found the wheels hidden behind a false wall in a house 5km from the garage. We had to break the wall down to get them out.’

The dry and well-ventilated conditions of the garage had done a good job of preserving the  Delaunay, and while Francis stripped the engine as a precaution, he found absolutely no wear in the cylinders. The leather was in good condition, and the hood intact – but it was decayed and fragile, and on its first outing in wet weather it leaked like a sieve, so the owner decided to replace it. He also asked Francis to give the body a fresh coat of paint, because he wanted to use the Delaunay on classic car rallies and was worried about it rusting. Most of us (including Francis) would have preferred just to give the original paint a good waxing, but c’est la vie…

Paint, hood and tyres aside, the car has needed very little doing to it since it was rediscovered in 1984, although Francis has added an electric starter – turning the 8.0-litre engine, even when decompressed, is not for the faint-hearted. He is particularly proud of the Delaunay carburettor, a very rare item because it drinks fuel and was usually swapped by later owners of Delaunays for more frugal alternatives.

Activating that electric starter prompts the Delaunay into life with no hesitation, its six-cylinder motor idling with a throaty burble. You sit comfortably in a leather bucket chair, with a chunky steering wheel in front of you – while the car isn’t at all Ghost-like in detail, it has that same unstoppable locomotive kind of presence. You can tell this car was built for serious motoring.

Drag the gearlever back into first – the four-speed gearbox has a slightly unusual shift pattern: second is where first normally is, and vice versa, with third and fourth in the normal positions, so you have to go ‘around the corner’ to move between second and third – and it’s a pleasant surprise to find that the clutch is quite progressive, although the steering is massively, arm-wrenchingly heavy at parking speeds.

You can never forget the Delaunay’s sheer weight (about 2.5 tonnes), but it accelerates purposefully, and the gearchange proves to be refreshingly easy – Francis Courteix says the Delaunay is much easier to drive than the 40hp Renault that has kept it company for most of its life. The steering is precise and slop-free when on the move, which gives you confidence to gun this monstrous car to 50mph and beyond. It feels as though it will run all day at this kind of speed, and you can understand why Pierre de Lauriére preferred it for long journeys.

Like any big car of the period, the Delaunay prefers going to stopping; the brakes work fine,  but there aren’t any on the front, so you drive with anticipation, just in case… Of more concern are sharp corners, where the weight of the steering can catch you out if you’ve been bumbling along in a more-or-less straight line for a while. The engine is not quite as whisper-quiet as a Rolls-Royce’s but it emits a pleasantly thrummy sound, and there’s just a hint of bite to the exhaust note.

With the good ship Delaunay safely back at anchor, there’s time to reflect on what a fine machine it really is. Some of the details are entrancing: the two sides of the bonnet, for example, which wrap around the engine like a 19th century Belleville boiler – although it’s been suggested the cylindrical shape was actually adopted to duct air efficiently around the engine – meet and are clipped together at the top; release the catches and the sides can be unhinged at the bottom and lifted away from the engine. Then there are the quick-release caps for the radiator and fuel tank: pull a plunger on either cap and it retracts three internal locking prongs. So much less fiddly than laboriously screwing a cap on and off, with the attendant risks of cross-threading.

You’ll have gathered that we warmed considerably to the Delaunay over the course of an afternoon. There’s an honesty to it that induces you to find its looks characterful rather than challenging, and its rarity and unique provenance are added attractions. Only 55 were built, reputedly, and you can count the survivors on the fingers of one hand. Makes a Ghost look common.

Despite diversifying into commercial vehicles after WW1, the company was dealt a mortal blow by the Depression of the late 1920s, although it persisted in the car business to the very end. Its swansong would be a Mercedes 230 imitator, the RI6, in the late 1930s, which was briefly revived post-war before Delaunay went the way of Talbot-Lago, Delahaye, Delage and all the rest.

The ultimate irony was that the Delaunay factory was taken over by Robert de Rovin in 1948 and used to make microcars. It’s hard to think of  a more pointed example of going from the sublime to the ridiculous. 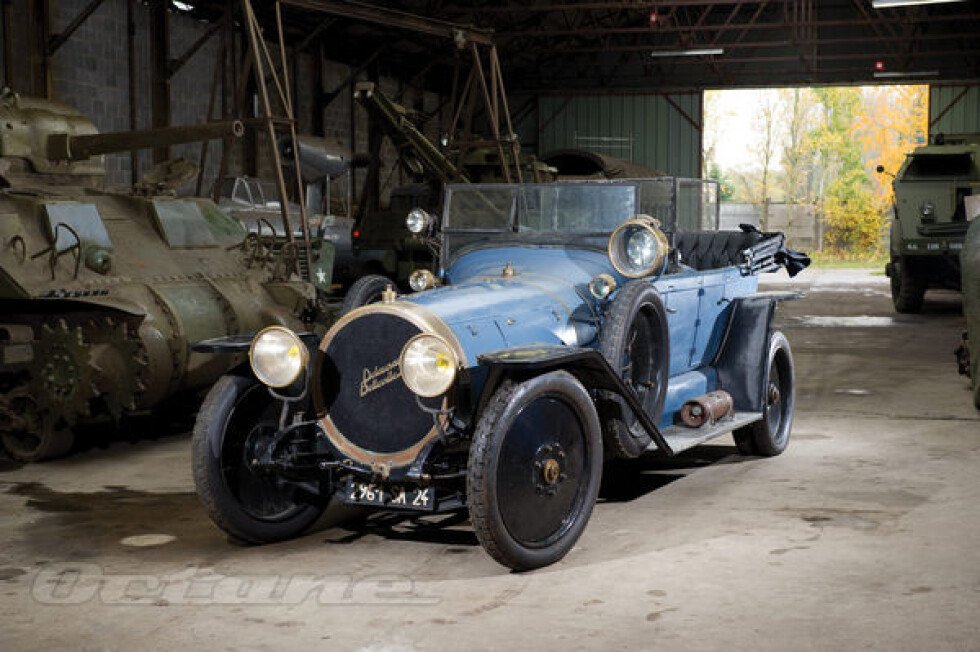