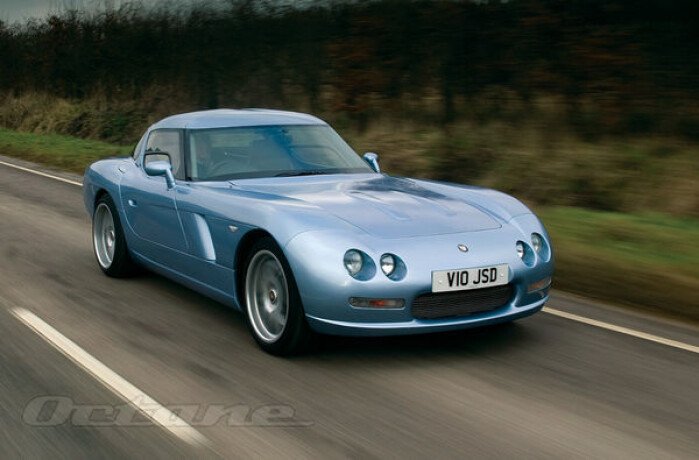 I know the late, great LJK Setright is the uncanonized patron saint of Bristoldom, and I too certainly have enjoyed a goodly share of his work, straight from way back when I should have had my nose in schoolbooks instead. But personally, I still think he has a lot to answer for. You see, I can’t help thinking that if it wasn’t for the brilliant and oh so erudite writings of dear old Leonard, many of us wouldn’t have this subconscious image of the typical Bristol owner as a rather sombre sort who sees the cars as the One True Religion. Then again, had it not been for Setright’s livelong trumpeting of the tiny, fiercely independent, and otherwise oft-overlooked brand, we might not have any image of Bristol at all, so one supposes it all washes out.

It is nevertheless something of a surprise to wind up spending our first half-hour with devoted Bristol owner Simon Draper discussing the comedy of Andy Kaufman, and to find the man has such a generous sense of humour he will laugh at my imitation of Jim Carrey’s imitation of Kaufman doing Elvis. And although he has about a dozen assorted Bristols lined up in this garage, including the sole surviving Type 450 Le Mans car (yep, they did, and they were very successful there, too), he also has Aston Martins and Lancias and a tastefully tweaked-out purple 240Z, and his road transport for today is a Ruf Porsche. So much for stereotypes.

But busting stereotypes is part of what the Bristol we’ve come to see is all about. Named as per longstanding tradition after a notable aircraft of the founding firm, the Bristol Fighter isn’t what you’d expect from a company whose vehicles of late have been closer in concept to ‘70s Mercedes SLC than contemporary Lambo Gallardo. That is, more in the way of luxury sporting tourers than fodder for teenage fantasies.

The Fighter, on the other hand, is a bona fide 200 mph, horsepower-drenched, fat-tired supercar. Introduced in 2004, it is the first product of Toby Silverton, financial partner in Bristol since 1997 and from 2002 to 2011, chairman and proprietor.

Which is in itself an indication of the change happening at Bristol. For years, previous boss Tony Crook maintained a decidedly adversarial relationship with the press, especially those non-Setright types who questioned Bristol’s place in the cosmos and Mr. Crook’s running thereof.

In a way, it was understandable; ever since their establishment in 1946 as the automotive arm of the Bristol Aeroplane Company, Bristol Cars, Limited have emphatically done things their own way, and more so following their autonomous spin-off under Crook in 1960. Having reached a design formula that filled their chosen niche—upmarket, hand built cars that emphasised functionality above either styling or outright speed—they stuck to it rather faithfully.

Unfortunately, not only was it an uncommonly focused and blatantly iconoclastic niche, the mere fact the company steadfastly remained out of step with the rest of the industry was sufficient to draw critical scrutiny from journalists of all sorts. Most were of course honest professionals genuinely looking to tell a story; some were inevitably entertainers more interested in scoring cheap shots at the expense of the deliberately different, sometimes reportedly without ever driving an example, and that didn’t set well with the already sensitive Crook. As time wore on, Bristol became increasingly a closed camp, and apparently more determined than ever to damn the torpedoes and steam full speed ahead.

That Toby Silverton, himself a dedicated long-time Bristol enthusiast, appears as willing to bridge the gap between press and company as he is to improve and refine that which makes the marque special is therefore a highly significant development. Before meeting the man, though, it seemed sensible to drive the car that represents his vision of the ultimate Bristol, which is why we’re pitched up on the doorstep of Simon Draper. As the company currently has no Fighters available for test drive (these days anyway, it’s not because of any press embargo; they’ve simply sold them all), he has kindly agreed to loan us his.

First off then let’s get right down to everybody’s opening question: Good God yes it’s fast, you bet it is, and with no excuses or qualifiers about “for a Bristol” or other such silly twattle. The factory says 0-60 in about four seconds and top speed in the neighborhood of 210 mph, and the car presents no reason to seriously doubt either figure; if it’s a few ticks off one way or t’other, or a hair plus or minus the latest mega Ferrari, the argument is very much an angels-dancing-on-the-head-of-a-pin thing that makes no difference in anyone’s real world. The Fighter will press your eyeballs back in their sockets as hard and as long as any road car I’ve ever cracked a whip over.

Like all Bristols made since the company’s original BMW-designed inline six outlived its prime in 1961, the Fighter has a big, healthy American Chrysler engine up front, in this case, an alloy 8-liter V-10 derived from the Viper unit, with 525 horsepower and an equal amount of peak torque, backed by the Viper six-speed. Full-on weight with all luxo-trimmings is barely above 3300 pounds, so acceleration in the lower gears is understandably ferocious; since the engine delivers two-thirds of max torque pretty much as soon as the starter spins, however, every gear is effectively a lower gear, just pick any slot whenever you like and press the throttle.

And if the normal, ordinary 210 mph Fighter isn’t adequate to your needs, there’s a Fighter S with 628 horses, or the twin-turbo Fighter T with 1012 and 1036 foot-pounds of torque. The company also claims that as you approach terminal velocity (and I’m not sure if I intended that as a pun or not, really…) a ram-air supercharging effect built into the engine fresh-air ducting on both of the normally aspirated cars increases final bhp by roughly five percent. Surely there’s plenty of angels dancing around somewhere in all that to please anybody.

None of the above, oddly enough, being information that features prominently in the discussion when Simon Draper first leads me out to introduce the car. If memory serves, in fact, his initial comment is “you’d never believe it’s smaller than the Porsche if you hadn’t seen them together, would you”, and from there he goes on to praise the luggage space, the ground clearance, the interior room, and how you can use the car for practical, everyday transport as opposed to so many others with similar performance.

Indeed, the aviation technology still influential in Bristol design is obvious even on a walk-around, but it’s av-tech in the sense of logical, simple stuff that absolutely must work properly or tubes full of people fall from the sky, and not in the flash and dazzle sense perpetuated by jet-jockey video games (and some Fighter competitors). The Fighter is exceptionally clean externally, for instance, with low drag prioritized over downforce, because Bristol believe road cars can change pitch angle too easily over irregular tarmac and lose that downforce; Bristol also consider how drag and stability changes as the car yaws left or right into the airstream, as in high speed lane changes or when attacking semi-crosswinds.

Eschewing downforce also means no chin spoiler to collect speed-bump damage (and the Ruf is showing a new whack as we speak); add in short overhangs, that amazing ground clearance, and only 5-foot-10 of overall width and the thing could tackle an Andean mountain goat-path. I find it extremely handsome, too, and I’m sorry, but being something of an Italian car guy, I wouldn’t necessarily say that of every Bristol, and naturally it is very, very discrete—no badges on the bodywork anywhere. I’m still not completely sold on gullwing doors, though; they all seem determined to smack my head at some point of the ingress/egress cycle.

But gullwings do definitely offer benefits, and beyond their suitability for British-sized garages and parking spaces: they allow fat modern crash-proof A-pillars to be moved more safely off the driver’s line of sight. Good visibility was actually another Fighter design priority, and it’s impressive all around; the corners are also mercifully easy for the driver to locate and the driving position is comfortable with ample adjustments for everything. The interior does not, however, try to mimic an airplane cockpit, with the possible exception of an engine hour gauge in the overhead panel (standard aircraft practice for scheduling maintenance, and seems reasonable to me).

Nor does the engine explode to life with a proverbial throaty roar; it doesn’t really roar any time, putting a considerable cramp on my usually breathless descriptive prose, I’m afraid, it merely makes an urbanely subdued organic rumble as the revs rise. A bit disappointing at first, to be honest, until I remember a particular two-day trip sealed in a race-rep GT with only paint for sound insulation, and suddenly the possibility of hearing the radio at a respectable motorway clip seems delightful. Chassis and body rigidity is noteworthy, with no jiggle or panel boom over the worst frost heaves or potholes, and there’s no sensation of frenzy in the car regardless of circumstances or speed.

Bristol have slicked-up the Viper gearbox as well, greatly reducing shift effort, and although Simon has stiffened the suspension on this one somewhat to suit his own preferences in track-day handling balance, the ride is supple but the grip level prodigious. The steering is unusually light for a car of this class, almost too light for my taste, but the turning circle is fabulous, tight as a London taxi, quite literally: London taxi was the target spec. It is, despite the staggering power and speed potential, a tremendously easy car to drive, and if you cranked the traction control to full gain and stuck on L-plates, most any decent novice could probably pass their driving test with it.

And if by now a pattern should be emerging, it’s no coincidence; Simon mentioned as much while we stood beside the row of Bristols talking about innovational comedians and nonconformist motorcars. One thing I like about Bristols, he said, is the consistent theme throughout their entire history, and after a few hours with the Fighter I think I understand what that is. No matter how fast it goes, no Bristol is ever likely to adorn the bedroom walls of a fifteen-year-old; that’s not their place in the cosmos. Bristols have always been cars for adults, and intelligent, rational adults who are more concerned with how they themselves feel about their choices than how other people feel about their choices.

The Fighters just happens to be the fastest, best looking application of the Bristol philosophy yet produced, and I do believe I’m quite taken with it. I might even get used to those gullwing doors, too. 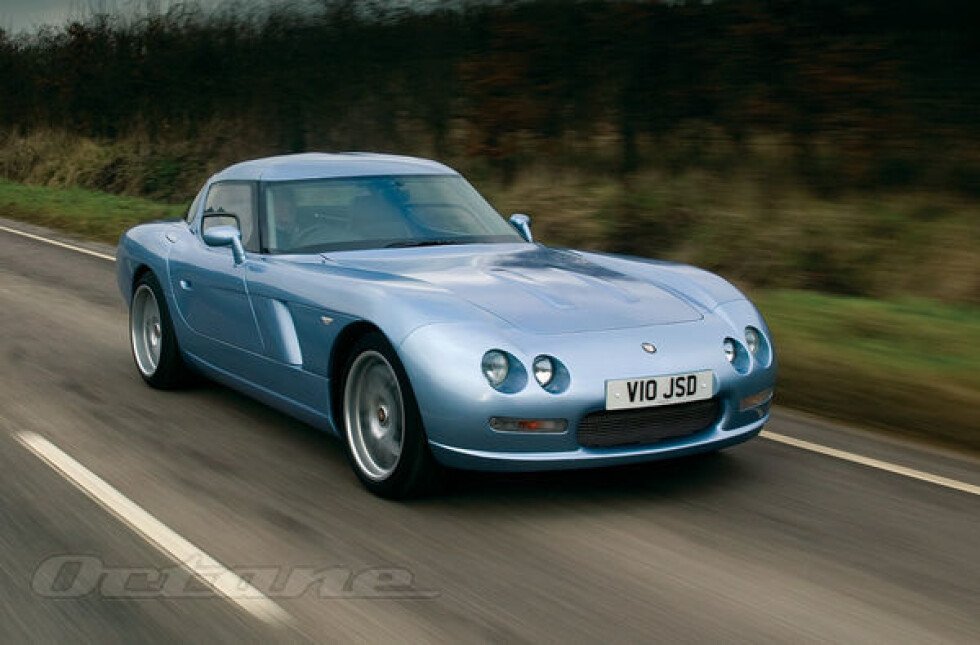