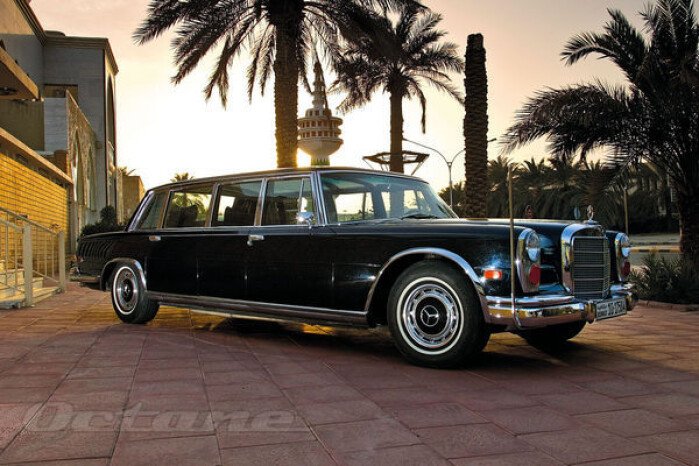 If you’re looking for an automobile that had as its fans the great, the good and the bad of the 1960s, ’70s and ’80s, then look no further than the Mercedes-Benz 600 Pullman, possibly the ultimate plutocratic limousine.

Finding a 600 Pullman that’s not been owned by someone of note must be quite difficult, given that a mere 2,677 of these fabulously expensive cars were built between 1963 and 1981. We’re in Kuwait to drive one of only two complete, running 600s in the Kingdom, an automobile which you’ll not be surprised to learn has an interesting ownership history. And that’s not counting its current owner, Ahmad J Al-Qathiby – a man with a penchant for classic European limousines.

When it was first unveiled at the Frankfurt International Motor Show in 1963, the Mercedes-Benz 600 – or W100 Grosser Mercedes in Benz-speak – was an impressive statement of intent from its maker. The long-awaited successor to the immense pre-war 540K, it was intended to be simply the best car in the world – and work started on the project back in 1955.

The team put together to style the Mercedes-Benz flagship was headed by Paul Bracq and Bruno Sacco (who would subsequently be responsible for the company’s finest automobiles). Meanwhile, Dr Fritz Nallinger and his crew – Rudolf Uhlenhaut, Josef Muller and Karl Wilfert – were tasked with engineering a car that bore the weight of West Germany’s expectations. The team was not encumbered by any form of development budget restrictions, and consequently created a clean-sheet design. The most exciting aspect of the 600 was its engine, dubbed the M-100. It was the company’s first V8, a 6329cc powerhouse bristling with all the latest technology – sodium-filled valves, hardened valve seats and aluminium alloy cylinder heads. It developed 250bhp and 369lb ft, which were enough to push the 2,640kg limousine to a top speed of more than 125mph.

But it was the high standard equipment tally and bespoke nature of its build that really set the 600 apart. Hydraulics powered just about everything – including the suspension, windows, seats, glass partition, door locks, trunk lid, sunroof, disc brakes and doors. This set-up was chosen by Nallinger because of its silence and smoothness – much to the chagrin of later owners who had the prospect of fixing leaky systems.

There were several body variations, too. The 600 was offered in standard-wheelbase four-door form, as well as four- or six-door Pullman, and a Landaulet version (note the German spelling of Landaulette), favored by the less-than-shy plutocrats. Our Pullman, chassis number 2,029, is a long-wheelbase four-door, of which 428 were made – and this one has done rather a lot of travelling in its long life.

In 1971, our car was delivered to its first owner, the Government of the People’s Republic of China. It was to become the personal car of Marshal Lin Biao, at one time among the most trusted of Mao Tse-Tung’s Generals. He would end up enjoying the sybaritic pleasures of this most un-Communist of cars for a tragically short period of time: Lin died on 13 September 1971, when the aeroplane in which he and his family were flying crashed in deepest Mongolia. It was flying low to evade radar, on its way to Soviet Russia, allegedly after his assassination attempt on Mao failed.

Following the ‘Lin Biao incident’, the car was placed into storage. As Lin was an officially condemned traitor of the Communist Party of China, the continued use of his Mercedes-Benz was no longer appropriate. And the 600 remained this way until 1986, when it was pressed back into use for Prince Sihanouk, head of the Coalition Government of Democratic Kampuchea.

It didn’t last long in this role either, and was soon on its travels again – this time to the USA, where it was bought by Dr Armand Hammer, American industrialist and the former Chairman and CEO of the Occidental Petroleum Corporation. He had the 600 restored to concours condition (good enough to pick up a Judges’ Award at the 1989 Amelia Island Concours, where it proudly wore the stars and stripes on its bumper-mounted flagpoles), before using it as his personal car. Again it proved a short-lived relationship, as Hammer died in 1990.

Our car has been in Kuwait since the mid-1990s and, wearing a mere 32,000km on the clock, it remains in rude health despite the difficulties in getting parts there. It’s clearly cherished by its wealthy owner, as it’s lacking the coat of sand every other automobile in the Kingdom seems to be wearing. That makes his offer to lend us the 600 all the more generous.

My plan is to drive the Sheikh’s personal assistant around Kuwait, and see how it feels to be a chauffeur in the world’s finest limousine. But because of my large feet and long legs, the cramped driving compartment is far too uncomfortable – even if it is a sight to behold, lined as it is in gorgeous rosewood and red leather. The rear looks even more inviting so, turning an irritating set-back into an opportunity, and in the interests of giving readers a true feel for life with the 600, I join our host in the back and summon his driver to give us the full guided tour of the tiny oil state.

Typically, thanks to wide-opening doors the rear is easy to get in and out of in a most dignified way – and despite the fact the seats are set so far back, you slip round easily and almost flop into the softly-sprung bench. Once settled in, legs outstretched, feet buried in the deep-pile carpet, it’s tempting to fiddle with the built-in old-school CRT television and VHS, while seeing what’s in the drinks cabinet (non-alcoholic, as Kuwait is a dry state). But we’re here to evaluate the 600’s strengths, not play with the gadgets.

Our driver fires up the V8 and, from where I’m sitting, the noise levels don’t change at all. I’m aware the engine is idling, but I can’t actually hear it. Yes, it’s quiet, but our host is already hammering away on a superbly paced and loud business call. He’s not using one of the two magnificent corded hand-sets built into the business-unit-video-player-drinks-cabinet, though, but a slimline smartphone that seems totally out of keeping with our surroundings. With nary a shudder, our driver engages gear and drifts effortlessly into the traffic – and I can immediately see the appeal of the 600 from where I’m sitting. After a busy day running a country, or counting your millions (or billions), this is the perfect place to get away from it all, and watch the scenery outside silently scroll past through the curtained side-windows.

It’s hardly a surprise that the 600 cushions rear passengers from the realities of pot-holed urban blacktop like no other car I’ve experienced. The seats are typical Mercedes-Benz items from this era – firm to the touch, but yielding and well sprung. Combine this with air-suspension, 80-profile tires, a 3.20m (126in) wheelbase and that hefty curbweight, and you have all the ingredients needed to obliterate any sensation from the road below.

We smoothly halt for a major junction, and I figure it’s time to road test some of the 600’s finer features. We’re already aware that the air-conditioning is working well, easily fending off the heat of the Kuwaiti evening, but it’s time to exercise those much-vaunted hydraulic window controls – and true to Mercedes-Benz engineer Nallinger’s wishes, they glide up and down silently and effortlessly. It’s quite a contrast to our guide, who has by now conducted several deals while we’ve been hustling through rush-hour traffic.

I ask how he finds running a car like this in the Middle East. ‘We do have some trouble getting parts, as many specialists won’t deliver here,’ he says. ‘Our local Mercedes-Benz dealer is also unwilling to service the 600.’ But otherwise, running the car here is as painless as it’s ever going to be. Gasoline is cheap so an 8mpg thirst is no problem, and in city traffic dominated by super-sized SUVs it’s actually not that unmanageable.

At this moment the lights change, and our driver puts his foot down. For a car with no pretensions of performance, it accelerates really well. And somewhat surprisingly we’re not thrown around the cabin, as there’s little of the suspension squat I’d been expecting. But I’m forgetting that the 600 was always going to need a fair bit of agility – hence the limited-slip diff – to evade possible terrorist threats (or insistent paparazzi).

This truly is a car defined by its buyers – interesting bunch that they are – and it meets their unique demands perfectly. We’ve been afforded an insight into the lives of the rich and (in)famous, and can’t help but like what we see. You can, too, as the Merc is for sale for around $165,000 (45,000 Kuwaiti dinar). The world would be a poorer place without cars like the 600 Pullman. 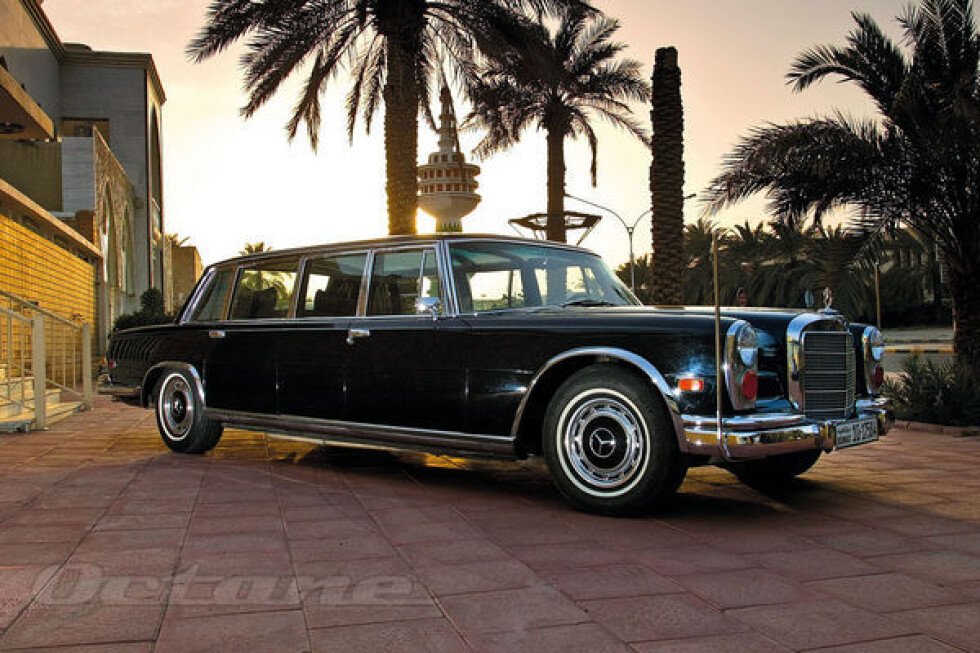