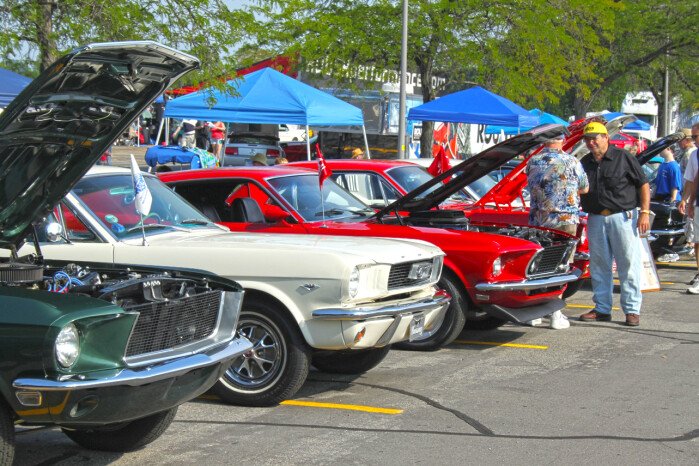 
It’s been said you can’t tell the players without a program, but when it comes to identifying classic cars, you can’t rely on the number on the back of a uniform or jersey. The Ford Mustang is an iconic car that even non-car people can spot at a glance, but few knowledgeable auto enthusiasts are adept at distinguishing the subtle year-to-year variances.

Technically all first-year Mustangs are 1965 models, even though they went into production in early 1964. There are a number of small, subtle changes between the cars commonly known as 1964-1/2 and 1965 models, but at a glance they look the same.

You’ve got to look under the hood to really see the changes between a 1964-1/2 and 1965, including the headlamp bezel, which is beveled on the 1964-1/2 models to act as a styling “filler” for unimproved hood edges (arrow). When you’re looking under the hood, check also for a generator. Only the 1964-1/2 cars had them, although many cars have since been converted to the later alternator.

The 1964-1/2 and ’65 Mustangs have a grille with a honeycomb mesh pattern, along with vertical bars above and below the running-horse “corral.”

Here’s the front of a 1966 Mustang, which has horizontal bars for the grille mesh pattern and a “floating” corral – no vertical bars.

From the rear, the gas cap is a tip-off between 1965 and ’66 Mustangs. The 1966 cars have an exclusive fluted/ridged design around the entire perimeter, as shown on this ’66 cap. The 1965 cars have a smoother perimeter with a trio of hand-grip recesses.

By the way: There were no 1964-1/2 Mustang fastbacks. Production started with the later ’65 models. And if you’ve been paying attention so far, the grille on this example should tell you it’s a 1966 Mustang.

Although built on the same basic platform and carried the same basic silhouette, the 1967-68 Mustang’s dimensions grew around the edges and, overall, those edges got a bit softer and rounder.

See those simulated air intakes in the side scoop? They were only found on 1967 Mustangs. The ’68 Mustang had clean, unadorned scoop styling.

Mustang styling changed significantly again for 1969 and ’70 – and again growing in dimension. There was a great forward angle to the nose and the signature C-shape side scoops were eliminated. It’s easy to spot a 1969: It’s the only Mustang with four standard headlamps.

Styling remained mostly unchanged in 1970, except for one important and unmistakable revision – the elimination of the four-headlamp nose, which was changed to twin headlamps flanked by simulated air intakes.

The Boss 302 is one of the most popular and collectable Mustangs that was offered only during the 1969-70 styling period. Along with the easily identifiable front-end styling between the two model years, the appearance of the Boss 302 differed between the two years, too. The ’69 had the bold C-stripe seen here, along with a black hood center.

Here’s the ’70 Boss 302, which is distinguished by the stripes that flow up the front fenders and onto the hood.

The next big change in styling came in 1971, taking the Mustang to its zenith in exterior dimensions. It was a bold look, but customers balked at the greater size of the car, which definitely strayed from the other car less than a decade earlier.

The 1971 and ’72 Mustangs are essentially indistinguishable, but if you walk around to the back of non-Mach I models, you should find block MUSTANG letters across the vertical portion of the deck lid on 1971 models. On 1972 cars, the letters were replaced by a more discreet Mustang script located on the right side of the deck lid.

There was a noticeable facelift for 1973 that was done mostly to satisfy new federal bumper-impact regulations. The grille and headlamp trim was new, while the front bumper protruded only slightly more than the ’72 models.

The popular Mach I is distinguished in 1973 by its one-year-only lower-body graphic. The 1971 and ’72 cars and a thinner, hockey stick-style stripe that ran higher on their bodies. Unfortunately, the thicker ’73 stripe added visually to the car’s perceived portliness. 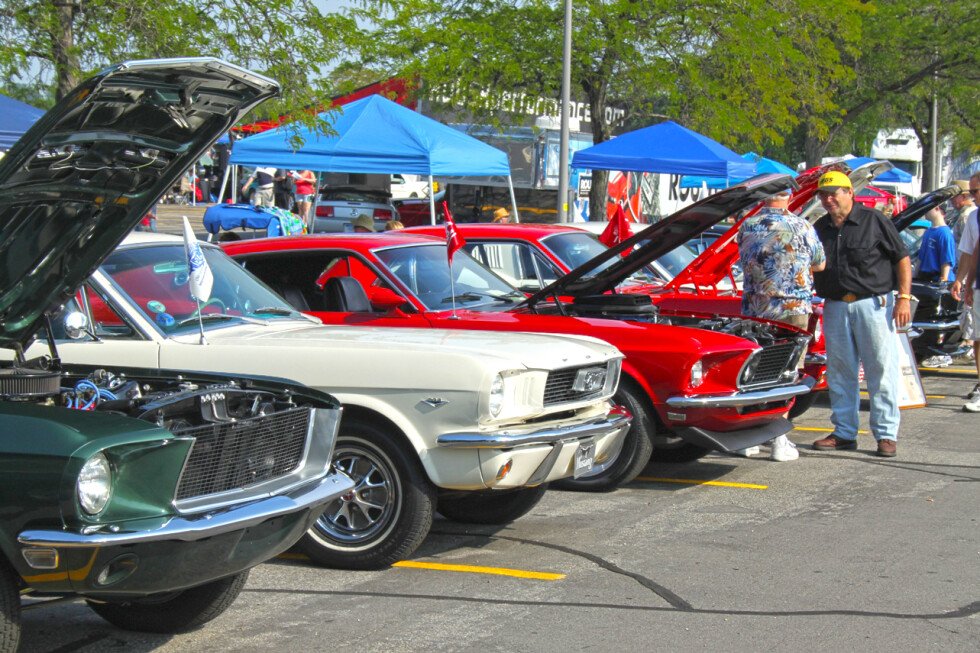