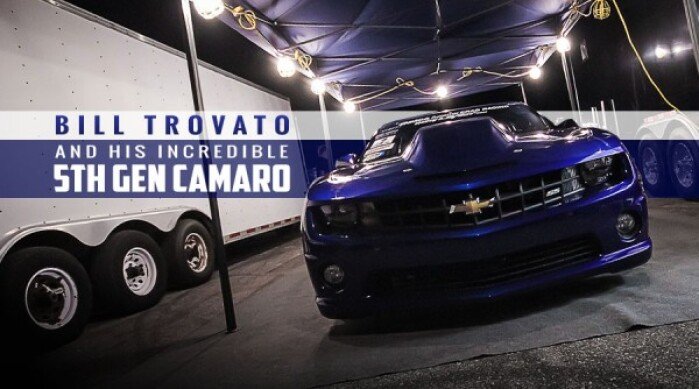 As one of America's all-time favorite sports cars, it's no surprise that you can show up to just about any drag race in the country and see pristine examples of all generations of the Chevy Camaro. This weekend's Chevrolet Performance LSX Shootout at the NMCA World Street Finals was no different. From insane, restored 1st Gens to amazingly modified 5th Gens, and everything in between – the Camaro love on display in the Hoosier State waspatently evident.

That said, we wouldn't be telling the truth if we didn't let you know about one Sapphire Blue 2010 Chevrolet Camaro SS, in particular, that had us doing triple-takes as we made our way through the pits at Lucas Oil Raceway.

We walked towards the trailer and we're quickly introduced to the owner of this bodacious, blue, bowtie-adorned monster, Bill Trovato - .

For those who aren't hardcore drag racing fans, trust us when we tell you, Bill's name is one of legend. Veteran Rochester, New York street racer, dragstrip champion, engine builder and author – his knowledge and skill in the sport are revered.

To avoid the sonic interference of generators and tuning sessions all around us, Mr. Trovato obliged us and invited us aboard his RV. We discussed a variety of topics: his history in the sport, why he chose to make the switch from his famous, old school Starfire to his eye-catching, pavement-pummeling 5th Gen, and why he only wanted people who were extremely passionate about his new LS-based project to participate in its creation. And the following is what he hadto tell us…


The BLOCK - So, tell us a little bit about yourself and how you got into the racing game?

Bill Trovato - Well, I grew up in the late 80s, racing in Rochester, New York. And then around 1996, I found the NMCA, and I went to my first race in Memphis and said, "You know what, I think I want to do this." So, that's how I made my way into the NMCA.

I had a Cutlass that I used to race on the street, and then around 1997, I started racing in a class called EZ Street. But, I quickly figured out that racing a 3,900 lb. Cutlass probably wasn't the way to do it. So, since I was already running Oldsmobile stuff, I built this old, 1978 Starfire, just because it was a light car. And, just about that time, the NMCA hired me on as a technical official. This was around 1997-2001. So, in 2001 I began to race the car, and my Oldsmobile was really competitive for a few years. But as Oldsmobile began to die off it became time to move on.


The BLOCK - Did you already have an idea of what you wanted to transition into?

Bill Trovato - I thought, “What kind of race car do I want to build?” And I really grew fond of the new Camaros. So in 2010 I purchased a body-in-white from Scoggin-Dickey and started the project.

A local guy named Patrick Budd had built a lot of successful chassis in his day, so I asked him if he’d like to be a part of the project. His team said they really wanted to do it, and they were very excited. That was the kind of reaction I was looking for, if they’d just treated it like another job I’d have had to find somebody else, but they were very excited and passionate about the project. That’s why the car looks the way it does.

Patrick designed the car while Nick Carlton and Chris Panny did the fabrication. The passion this team had for this project really shows in the car.


The BLOCK - It really is a cool car, very unique looking. How long did it take you to complete the build?

Bill Trovato - We started building the car in November of 2010. Financially and time-wise there’s only so much you can do. It took me until June of 2013 to get it down a racetrack. A friend of mine, Dave Lauer did all the wiring with a Race Pack Smart Wire system. East Coast Collision painted the car. And again, all of these guys wanted to be a part of this particular project, which is why it came together so well.


The BLOCK - What class are you racing the car in?

Bill Trovato - I run in the Extreme Street class, which has been around since the inception of the ProMedia NMCA. It’s a no wheelie-bar, nitrous or blower class. They typically run low 8s to high 7s, so it’s a really exciting class. I built this Camaro specifically for Extreme Street because it is just such a cool class.


The BLOCK - What's one major difference you noticed right away?

Bill Trovato - So, the car I raced before was very old school, and this car is very different. I’m throwing a lot of power at this thing and it’s not like that’s easy.


The BLOCK - Okay, so tell us – what's going on underneath the hood?

Bill Trovato - The engine is a Chevrolet Performance LSX block, which is, of course, super strong and stable. I really like that it doesn’t have any silicone. When I have to pull a pan or an intake I don’t have to silicone anything, all the factory gaskets are either steel or rubber, so after you pull it apart you can put it back together and be ready to rock ‘n roll fairly quickly.

I’m also using LSX LS-7 heads that have been worked on extensively by a guy named Marty Zimmerman. He was another guy who really wanted to be a part of this project. And he knocked it out of the park, this motor is 398-cubic inches and it makes 935 horsepower. The intake manifold is a Mast intake. It’s a carbureted motor; Dale from CFM is one of the best guys in the country as far as I’m concerned.

I could put fuel injection in there, but it would’ve added another fivegrand to the project. The headers are American Racing Headers, and they’re the best in the business as well. They’re just the highest quality and performance I’ve ever seen.


The BLOCK - What do you have planned next for the Camaro?

Bill Trovato - We're going to continue to test and tune and get the car exactly where we want to be. We're really looking forward to taking it to the next level.


The BLOCK - Bill, thanks so much for taking time to talk to us and let the fans know what you have cooking with this incredible car. We wish you the best of luck!

Many parts intended for racing or other "off-highway" use are not designed or tested for crashworthiness or to meet the safety needs of the motoring public, and may adversely affect the original intended performance or handling characteristics of the vehicle. These parts are designed and intended to be used with experts supervising their installation and use, to help assure the proper and safe operation of the vehicle. In no way does this website or its owners endorse the act of illegal streetracing. All images depicting racing are on a closed course. 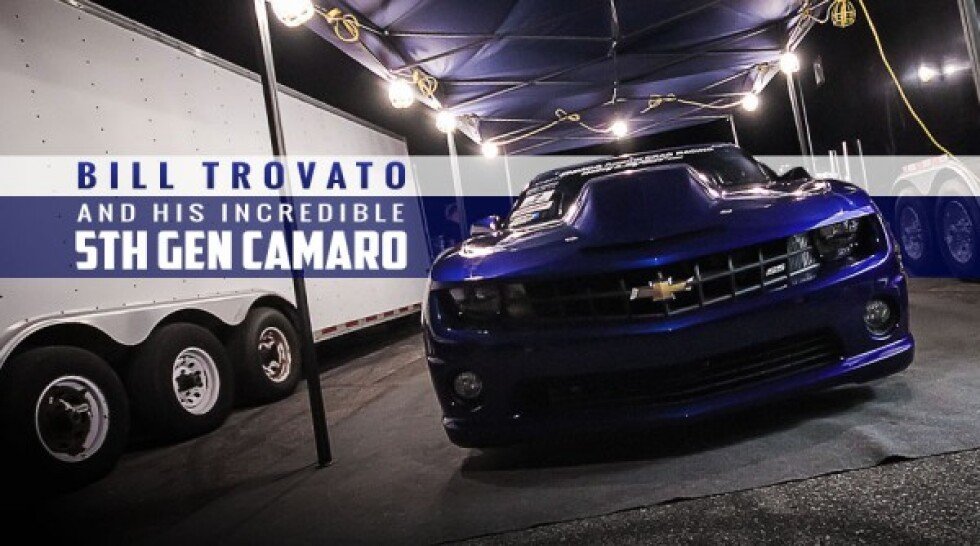