All About Electronic Engine Management 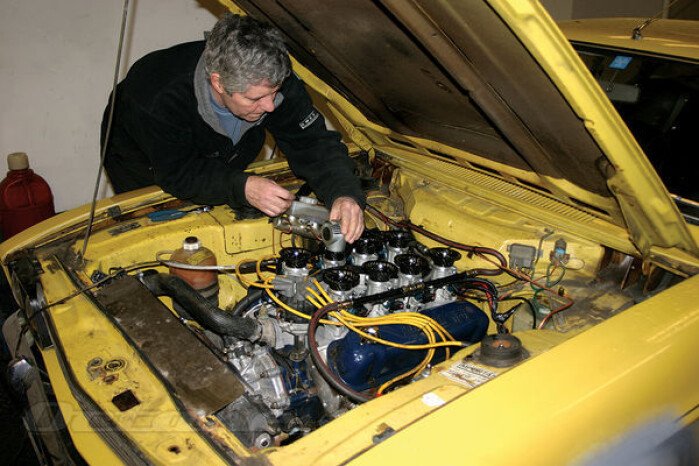 I can see the dilemma: keep the engine original or improve the way it works? The problem for me is that every day I see the benefits of engine management.

For more years than I can remember we in the tuning industry have talked about camshaft selection; where the power comes in, how high the engine will rev, always searching for the holy grail – a cam that would give power everywhere in the rev range.

It was only in the last decade, when accurate mixture monitoring kit became available, that we started to work out what was really going on. As a hypothetical case, take a typical two- valve engine with an indifferent combustion chamber and fit a pair of sidedraft carbs and a long-duration, high-lift camshaft. The power band may run from 4000 to 7000rpm and we rely on the driver’s skill to keep the engine in the power band. Below 4000rpm it will not take much throttle and has to be nursed up ‘onto the cam’ as we used to say.

Take a pull of the power curve on the dyno and plot the mixture with an accurate wide band lambda sensor. What you will discover is that the mixture goes to hell in a handbasket below 4000rpm – rich isn’t the word for it. You jet down on the mains and then go smaller on the air corrector to try and keep the top end mixture right. It doesn’t work so you go smaller on the choke size and re-jet to suit.The power now comes in lower down but top end power is compromised.

Now look at the ignition. No amount of messing about with springs and weights will give me the shape of advance curve that the engine needs because when I look at the torque curve it comes and goes in waves – as the tuned length of the intake and exhaust do their thing. On part throttle, always assuming I can get the mixture somewhere near right, I need much more advance and that’s the job of the vacuum advance capsule. But vacuum advance allows the distributor base plate to rattle about, scattering the timing at high rpm and detonating the pistons to death.

The ignition just has to be compromised for the sake of reliability but why can’t the mixture be corrected? Weber carbs have a massive range of jets and chokes, so you would think their must be an ideal combination somewhere. Sadly not, because we are so greedy for power that we are using a free form of supercharging called induction tuning.

By having one choke per cylinder we can alter the overall length of the intake system and take advantage of the pulse generated in the intake. This is a positive pulse reflecting from the open intake, forcing more air and fuel into the engine. But we find that the intake pulse is blowing out of the engine when off cam. The air passing over the main jet is going the wrong way but the carb doesn’t know that so fuel gets added and we find there’s fuel blowing out of the intakes, forming a visible mist around the bellmouth. This is known as fuel ‘stand off ’.

Then along came engine management and fuel injection and all the previous rules went out of the window. It no longer matters what the air flow does – you can simply add exactly the right amount of fuel to go with the air that finally reaches the combustion chamber. Cammy engines suddenly pull cleanly from anywhere and the driver no longer has to be a star at stirring the gearbox. This ability to exactly match fuelling to the air flow suddenly means you can be even more aggressive with the cam design, power output goes up and fuel consumption goes down.

Having total control of the ignition timing is a revelation. As with the fuelling you can now have exactly the ignition timing that the engine needs, anywhere in the speed and load range. On light throttle you can have 50 degrees of advance, backing it to 25 degrees on full load at the same rpm.You can pull back timing at peak torque and wind it on again at high rpm when the cylinder filling is dropping off rapidly. With a dual-map ECU you can even have two totally different timing maps for different fuel grades.The world is your oyster!

Then there is the accuracy. If you fit a timing disc to the front of the crankshaft you are then taking the reference straight from the horse’s mouth – so to speak. There’s no distributor backlash or base-plate wobble to put the timing astray. If you want the original look you can retain the distributor and just use it to send the spark around the cylinders, taking the timing reference straight from the crank or flywheel. Perfect!

An ECU is a timing device with a built-in memory. It measures the speed of the crankshaft and, from a known reference position (usually a gap in the tooth pattern), it knows at one given time where the crankshaft is during its 360 degree rotation.

The memory holds a required ignition timing setting in a look-up table divided into rpm and load sites. Sensors tell the ECU what load site is current and it already knows the crank- shaft position. All it then does is release the spark at the right time to give the ignition timing in the look-up table.

On the fuelling front you have a high pressure fuel rail with a constant supply of gas sitting there at around 45 psi or more of pressure.The injector is an electronic tap which opens on demand of the ECU and closes again a short time after.The open period, or duration, determines how much fuel comes out of the injector.

From a practical perspective you sit on the dyno or rolling road and tap the keys of the plugged-in PC with the engine running until you find optimum settings. Then you press enter and the new settings are stored in the look-up table (commonly known as a map).

Once you get the hang of it you will never go back to drilling holes in little bits of brass and gapping points with a feeler blade...

Advertisement
×
All About Electronic Engine Management