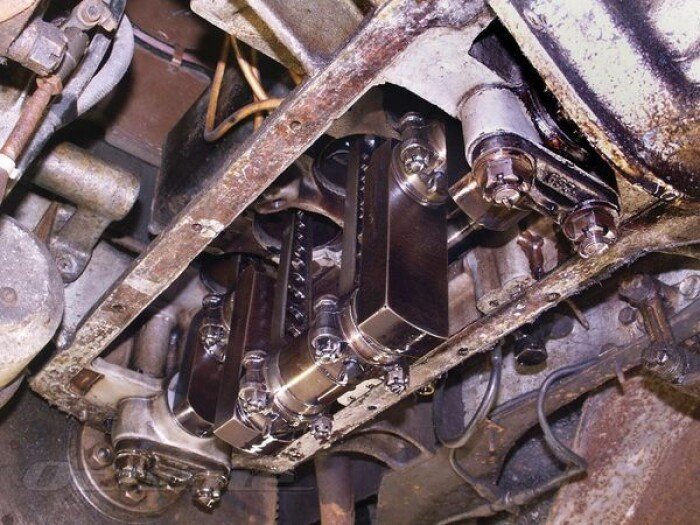 At the heart of every internal combustion or steam engine is the crankshaft – but its characteristics and needs are not widely understood.

In the early 1200s, Arab inventor Al-Jazari incorporated a crankshaft and connecting rods in a water pump. No piston engine can function without a crankshaft – it transmits the power  of the combustion explosions into controlled rotary motion. It is subject to enormous stresses, at 6000rpm completing 100 full turns every second while being bombarded by uneven explosions along its length. It has to withstand huge twisting forces as it transmits the drive, as well as side impacts. It must be held precisely in alignment, while being allowed to rotate with the minimum friction. It must be extremely rigid and strong, while remaining as light as possible.

Most crankshafts in classic cars are made of  a single piece of cast iron, though modern crankshafts are increasingly being forged from vanadium microalloyed steel. Carbon steel  is also used, but requires additional heat treatment. Steel is lighter, stronger and has better inherent damping, but is more expensive than cast iron. Crankshafts can also be machined out of billets of high-quality steel; this is expensive due to the amount of waste, but cost effective for low-volume production for competition engines. Some crankshafts are also built up from more than one piece, which offers convenience of engine assembly but can present problems with balancing and durability.

Hardness of bearing surfaces is generally provided by induction hardening, but billet cranks tend to use nitriding which is extremely hard and can be done at lower temperatures; carburizing is preferred for crankshafts running in roller bearings.

The ‘throw’ of the crankshaft – the radius of the circle that the big end draws around the center line of the crank – is also the stroke of  the piston. The ratio of that stroke to the bore (the diameter of each cylinder) affects the characteristics of the engine.

A long stroke, relative to the bore, became characteristic of British car engines from the 1920s due to the Government using RAC Horse Power rating, which measured only the cylinder bore, as a basis for taxation: by using a wider-throw crankshaft and hence longer stroke, manufacturers could get more power for the same ‘HP’ rating. A long stroke has benefits – it improves gas flow at low revs and therefore gives more torque – but it reduces power at high revs due to the high frictional loadings, and it limits maximum safe revs of the engine.

A heavy flywheel is usually bolted to one end of the crankshaft, its function being to smooth out the vibration inherent to the four-stroke cycle as well as reducing the likelihood of the motor stalling at low engine speeds. At the other end a damper may be installed, also to smooth out vibrations from the twisting effect on the crankshaft that could otherwise cause it to snap.

End play (fore and aft movement) is controlled by thrust bearings, which in some engines can fall out when very worn, allowing the crankshaft and engine block to become damaged.

Crankshafts in in-line and horizontally opposed four-, six- and eight-cylinder engines are normally phased 180° apart, and balance can be achieved by carefully weighing all the pistons, rods, wrist pins, rings and bearings, then equalizing them to the lightest weight. Vee-engines are not naturally balanced, so counterweights are usually cast into the crankshaft, balancing the reciprocating mass of the piston and connecting rod. Counterweights made of heavy metal such as tungsten or even depleted uranium may be used for ultimate performance.

Balancing the crankshaft became ever more important as piston engines developed: with accurate balancing, the engine runs more smoothly and quietly, less energy is wasted and engine life expectancy is dramatically increased. Any imbalance results in a centripetal force on the crankshaft, which has a bending effect  on the shaft that is exponential, magnifying dramatically at high revs and, if too severe, causing crankshaft breakage.

Rebalancing is vital when an engine is rebuilt: new pistons may not be accurately matched to the weight of the original pistons, especially if the cylinders have been bored out so the pistons are larger. Most aftermarket pistons are matched fairly accurately to original equipment piston weight, but this is not always the case – and  if lightweight performance pistons are installed, the counterweights of the crankshaft must be reduced accordingly.

Engines with fewer than four cylinders, V4s, V6s and in-line four-cylinder engines of larger capacity (generally over two liters) suffer crankshaft vibrations from the firing sequence of the engine. To achieve acceptable refinement, these are often installed with balancer shafts (as  in the Porsche 944) rotating in the opposite direction to counteract the vibrations.

Crankshafts must be dynamically balanced on a machine that shows precisely where weight should be added or removed. For engines with counterbalanced cranks, accurately calculated bobweights must first be added to represent the piston/connecting rod assemblies.

Balancing is usually achieved by drilling holes in the crankshaft webs; if weight must  be added, tungsten alloy plugs (1.5 times the weight of lead) are inserted. Modern electronic equipment makes the balancing process much faster and more accurate than of old.

Crankshaft bearings since the 1960s have usually been replaceable shell bearings – pairs of semi-cylindrical steel shells lined with softer bearing material. ‘White metal’ bearings were common in earlier decades, where bearing material was cast onto connecting rod big ends, main bearing caps and cylinder blocks, then machined to size. This process, using an alloy of tin, antimony and copper, is labor-intensive and expensive today, but still available from specialists. It is also used to recommission shell bearings where new replacements cannot be found. It may be cheaper to convert to shell bearings rather than re-lining, but thin-wall shell bearings require absolutely precise alignment, whereas white-metalling allows a skilled machinist to compensate for slight distortion of the crankcase or bearing housings.

When stripping an engine, check the crankshaft carefully for signs of uneven wear (bright spots), for ovality and for tapering of bearing surfaces. Check also for distortion, by mounting the crank on blocks at the outer main bearing faces and checking for run-out on the center bearing face. If it is being reinstalled without grinding, run-out of 0.003in is acceptable. If it is to be ground and run-out is greater than this, it should be stress-relieved before grinding, and remaining distortion taken out at this point.

Crack testing may give you advance warning if a failure is imminent, though you can be misled by minute surface fissures so it’s best to do it after grinding. Of course, if you can’t get a spare, there’s little point in crack testing: it will only worry you…

Advertisement
×
All About Crankshafts 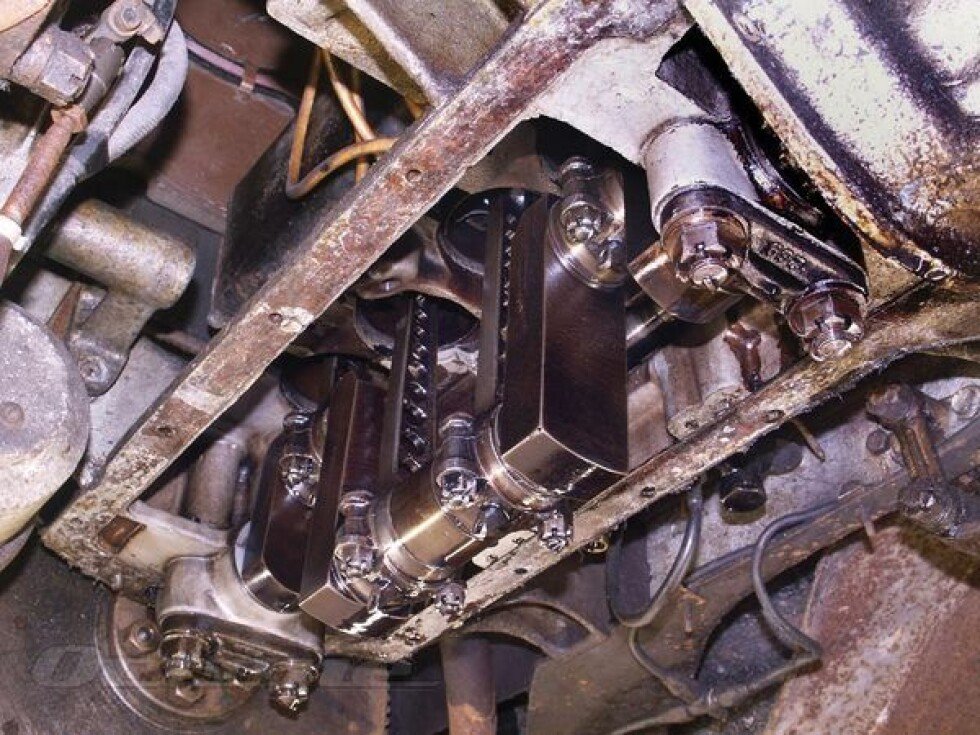