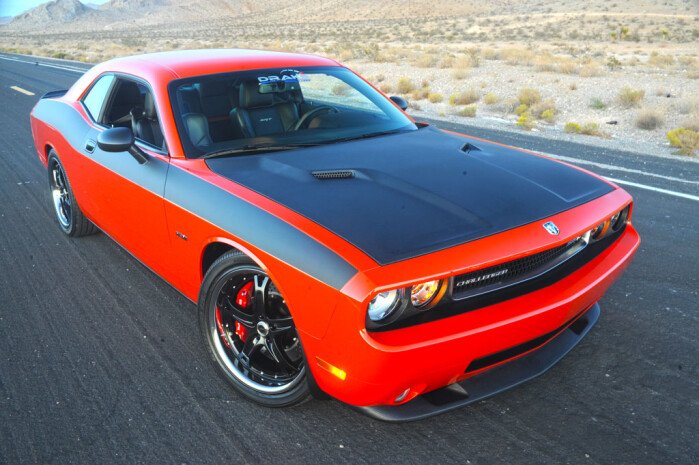 Our seventh daring design is actually two cars which illustrate the incredible staying power of the best Mopar designs. The all-new 1970 Dodge Challenger was a beautiful design, and many of those key design elements resurfaced almost forty years later when the Challenger was reintroduced in 2008.

The Challenger was a very late arrival to the pony car market, but it was one of the most handsome. It was an E-Body, similar to its sibling Barracuda, which was in its third generation. The Challenger rode on a two-inch longer wheelbase, but shared all engine and chassis components with the Barracuda and ’Cuda.

Style-wise, the Challenger echoed the wide grille opening of the larger Dodge Charger. The name evoked the Charger connection. The long nose and short deck were standard pony car parameters. This design offered ample front seat legroom and a tight rear seat. Trunk space was also marginal. Engines ranged from a little 225ci inline six-cylinder to a 440 and the 426 Hemi, which powers our rare black on black feature car.

As handsome and popular as the first gen Challengers were, the market declined rapidly (from approximately 77,000 to 11,000 units), until 1974, when the model was dropped. Ford’s Mustang is the sole uninterrupted production pony. When Chrysler Corp. decided to re-enter the market in 2008, they chose the Challenger.

Strong collector interest had kept the Challenger name alive. The new Challenger was built on a larger platform, which it shares with other Chrysler products such as the 300C and Charger. The increased size is surprising, because it’s hard to discern until you see the car in person. Many 1970 styling cues were used including the wide grille opening, grille, quad headlights, hood/scoops, rear quarter panel shape, rear side windows, roof contours, and taillights. Of all the current retro pony cars (Mustang, Camaro, and Challenger) the Challenger is, arguably, the best looking and most true to its heritage.

A Hemi powers Scott Drake’s 2009 Challenger SRT8, too, only this one is the new 6.1-liter Hemi. The Drake Challenger is mildly modified, as it serves as a rolling test bed for new Scott Drake Enterprises products.

Comparing the old and new is a testimony to the timeless design of the 1970 Challenger.