Plymouth put the Chrysler Corporation in the fastback business in 1964 and stayed there until 1969, which is the year of our feature car. Even though the 1964-1966 “Glassback” Barracudas have the more radical styling, the second series (1967-1969) have the more traditional Mopar muscle options, including the awesome 440 in the featured 1969 ’Cuda.

Big-block engines were first offered in 1967, when the 383 was added to the lineup. The 440 was a late addition, making the 440 1969 ’Cuda the most rare of all fastback Barracudas. There were also some Hurst-built, Hemi-powered Barracudas that were strictly for drag racing. These cars, along with the Hemi Darts, did very well in NHRA competition.

Stuffing a big-block in the Barracuda engine compartment was a snug fit. Power steering, power brakes, and air conditioning wouldn’t fit. Things were tight for the exhaust manifolds, so more restrictive than normal manifolds had to be substituted. Nonetheless, the 440 was rated at 375 horsepower, which was substantial for a relatively lightweight car.

The styling of the non-wraparound rear glass, while not quite as daring, is a smoother design. It’s a fine example of how Mopar designers fashioned pleasing shapes that worked well from all angles.

A unique 1969 ’Cuda styling feature was the hood treatment. Twin black stripes emanated from two small scoops at the windshield end of the hood. The scoops were not functional, and they were among the smallest hood scoops fitted to muscle era Mopars. The lower front fenders sported large “440 ’Cuda” decals, which should have been fair warning for any stop light challengers.

’Cuda interiors were clean and functional. The rear seatback still folded down like the first generation Barracudas, providing a spacious cargo area. The seats featured horizontal pleats that were repeated on the door panels. 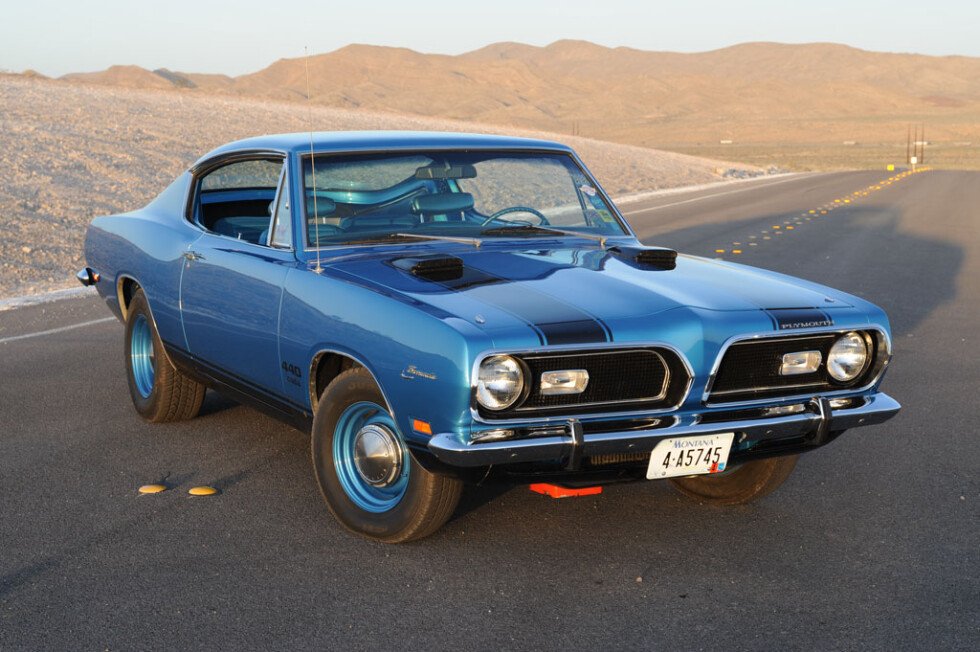