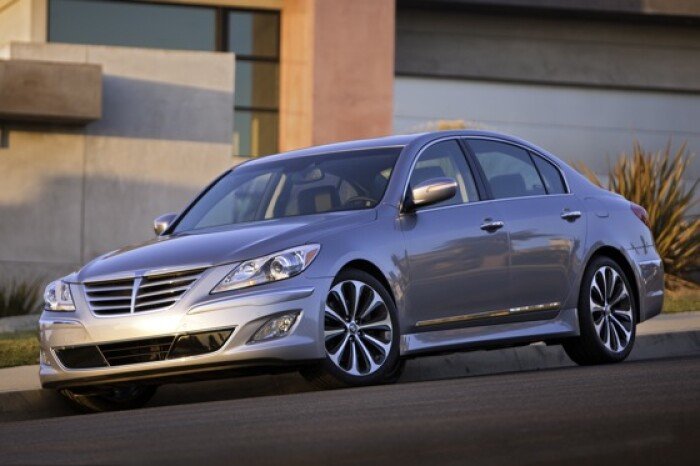 Toyota built its reputation on its "Kaizen" continuous improvement process, but now Hyundai is demonstrating itself as the current master practitioner of the philosophy. Some of the company's recent clean-sheet models, such as the Sonata and Elantra, have been spectacularly suburb from the beginning.

While the new Equus was designed as a no-compromises maximum luxury prestige sedan with U.S. customers in mind, the Genesis exhibits some evidence of its role as a prestige car for markets like Korea where the owner is likely to ride in the back seat rather than drive.

In its initial iteration, that meant a car with soggy, understeer-prone handling and powerplants that weren't competitive with the best in the car's class. With the introduction of the 2012 model, including direct-injected engines that make more power and burn less gas, along with an all-new Hyundai-designed and built eight-speed automatic transmission, the Genesis takes a dramatic step forward.

But a competitive front passenger's seat, which currently lacks the adjustability and cooling feature of the driver's seat, will have to wait until the next model, according to director of product planning, Scott Margason. So even Hyundai doesn't fix everything in mid-life refreshes, but because the U.S. recently became Hyundai's largest market, Margason said that we can expect to see American tastes - such as an emphasis on the front seats rather than the rear ones - to be more strongly reflected in future editions.

Comfort takes the back seat

The Genesis may have been built with rear seat-riding Korean executives in mind, but the 5.0 R-Spec is more driver-centric. That means installation of a new color LCD driver information display, available also on base V8 models and V6 models equipped with the Technology Package, and a new lane departure warning system.

Virtually everything you can see and touch inside the R-Spec is leather-wrapped, the instruments are clear and simple and the driver interface suffers no confounding irritations such as the joystick shift-by-electron shifters that afflict more competitors in the luxury segment every day.

However, competitors like the Infiniti M, BMW 5 Series, Mercedes E-Class, Audi A6 and Jaguar XF set a standard for opulent ambiance the Genesis can't match. Although there are no glaring shortcomings, the cabin just isn't quite on the same level as the competition.

It is typical for carmakers to remove the identifying badges from competitors' cars when showing them for competitive purposes, as if anyone would fail to identify a Mercedes without its three-pointed star. But if other companies need a generic opponent to show in their advertising, the Genesis will work without modification. The company hasn't applied the same dynamic exterior styling cues that give the Sonata, Elantra and Accent a family resemblance, and there is a complete lack of identifying badging on the front.

Incognito mob bosses living in the FBI's witness protection program could cruise their old neighborhoods unnoticed in the Genesis. That's because the car was introduced before the company's newer models debuted Hyundai's heroically received styling, which is why it still falls in the conservative lux-lookalike category. And ironically, it was those successful bread-and-butter products like the Sonata and Elantra that have boosted the company's image, not the supposed image-leader Genesis with its staid lines.

Hyundai's designers have cleaned up the Genesis styling a bit for '12, making the grille, front bumper and headlights a little crisper, adding LED accents to the headlights, toning down some of the chrome trim and integrating the dual exhaust tips in the rear.

429. Drivers with a sense of history will recall the Ford Mustang Boss 429, a car sold in limited numbers to get a powerful racing engine approved for use in Nascar. That 429 referred to the engine's displacement in cubic inches. The Genesis 5.0 R-Spec has a much smaller engine, but it produces 429 horsepower, more than enough to make it a credible contender in performance comparisons.

Matched with the new Hyundai eight-speed automatic transmission, this direct-gasoline-injected all-aluminum V8 is not only fast, but it's also efficient. The EPA rates the Genesis R-Spec at 16 miles per gallon in the city and 25 mpg on the highway.

The R-Spec addresses the indifferent handling of the base Genesis with a 19-mm rear anti-sway bar, which dials out much of that car's understeer. Additionally, engineers tuned the front and rear suspensions for sportier handling during spirited drives. Considering the soft handling of the base car, this increased stiffness imposes no discernable penalty on ride, while bringing the handling into much sharper focus.

For those worried about residual values for Hyundai versus the established prestige brands, the six-cylinder Genesis and the range-topping Equus both beat Mercedes, Audi and BMW in residual value according to Automotive Lease Guide.

Genesis sales have climbed for 24 consecutive months and are now selling at a rate of more than 2,000 cars per month, with the R-Spec expected to add another 5 percent to the car's sales.

The evidence shows consumer willingness to accept a Hyundai-branded luxury car, at least when the price is substantially discounted from that of the established players.

Hyundai has shown itself to be a credible player in the segment, and its newest products lead their mainstream competitors. But the Genesis is the first product developed and built during the company's current stride.

While the Genesis may not be as truly luxurious or sporty or a handful of other adjectives as the current models available from BMW, Mercedes, Lexus or Infiniti, it's very close. And with a price difference of several thousands, the R-Spec makes for a seriously compelling value statement in the luxury sport sedan segment.

Considering Hyundai's ability to deliver great cars in the mid-size and compact segments, do not doubt that the next great Genesis is in development right now. It will be a car that makes no excuses for its handling or front passenger's seat. For now, the R-Spec improves on the original Genesis, which is a good start. 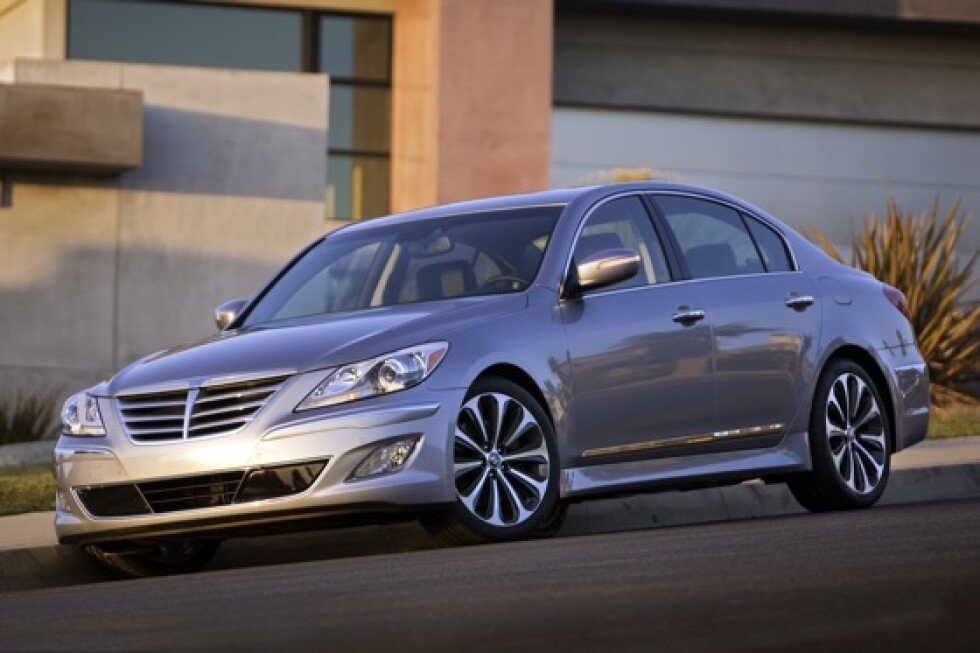