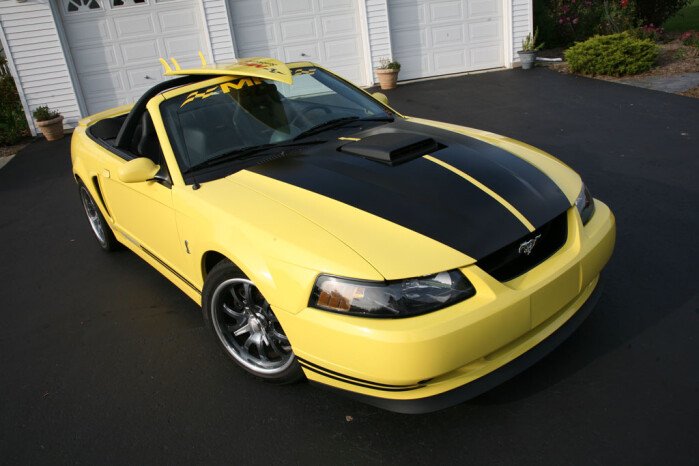 In the realm of cool and interesting cars, convertibles occupy a special place. Think ragtop and what comes to mind? Sunshine–a cruise down the coast road on a warm Sunday afternoon, maybe a drive a long Route 66 as the rays soften. Whatever might come to mind, the fact remains that having a convertible often makes life just a little brighter and more fun.

That’s exactly what MRT’s Scott Hoag thought when building one of his very first “themed” vehicles. In 2003, Scott, an automotive engineer, had left Ford Motor Company to start his own business. “I’d just finished working on the Mach 1 [Mustang] project at Ford. While involved with that program we’d toyed with the idea of a convertible–however, it was also in competition with an automatic version of the Mach 1 coupe. With the four-valve 4.6 engine, there hadn’t been an automatic option, so ultimately it was decided that a shiftless Mach would be the way to go–especially since it was more true to the original Mach 1’s DNA than a convertible.”

Nevertheless, Scott hadn’t forgotten the idea of a convertible Mach. When he managed to pick up a former Ford engineering Zinc Yellow ’03 Cobra convertible on the cheap, the seed was planted. “At the time we started MRT, I had to get creative when it came to building project vehicles, so managing costs and utilizing the resources we had were critical. This Cobra represented a good starting point.” As an ex-Ford development car it had been flogged within an inch of its life. “It had a 14,000 very hard miles on it,” says Hoag. “The front fascia, hood and windshield header were covered in road rash.” But it was affordable and the rash ultimately proved to be less of an obstacle than first thought.

In the meantime Scott had also found the inspiration he needed in getting his Mach 1 convertible project underway. “It was actually the color. At the time, we had a bit of a yellow thing going on. My wife, Lisa owned the very first ’03 Mach 1 which was Zinc Yellow. I had my Mach 1 racer which was painted the very same color, and then along came this Cobra.”

So with a two-month window for completion, the project got underway in earnest. One of the primary aspects of course, was making the car look like a Mach 1. “That was the straightforward part. By bolting on the Mach 1 front fascia, smoked headlights and chin spoiler, it changed the look of the car. By also installing the Mach 1 hood and shaker assembly, we were able to salvage much of the factory Zinc Yellow paint, since most of the road rash was on the parts we removed, which saved us a ton of time during the build.” The only part that had to be repainted was the header panel. In terms of the greasy parts, Hoag and crew pretty much left the drivetrain alone, except for adding JBA mid-length headers, a MRT catted high flow H-pipe and converter back 2½ inch exhaust with mufflers and performance tips.

“The 2003-2004 Cobras came with a lot of great hardware from the factory–strong, cast iron block, forged crank and H-beam rods and Eaton M112 supercharger, so all we added, besides the exhaust was an Accufab throttle body and Pro M Mass-Air meter.” The beefy Tremec T-56 six-speed gearbox also received an Exedy ceramic disc clutch and high strength flywheel, to withstand repeated hard launches. When it came to suspension, Scott had a specific plan in mind.

“At the front, we installed a set of specific MRT lowering springs we had developed at the time. We also installed J&M adjustable caster camber plates, Tokico struts, Steeda ball joints and a bumpsteer kit, because the ride height dropped almost 2½ inches by the time we were done.” At the back things went more radical. “True muscle cars have solid rear axles and to influx a bit more of the Mach 1 theme, we decided to remove the Cobra’s factory IRS assembly and substitute a solid 8.8-inch rear.” To that, Hoag added a Torsen limited slip differential, Tokico shocks and aluminum adjustable control arms, to keep the geometry in check and limit hop on the four-link setup once the lowering springs were installed. 2003-2004 Cobras came with pretty solid brakes from the factory, but Scott decided to up the ante even further, swapping them for Baer four-piston calipers and beefier cross-drilled discs.

For rolling stock he went a slightly different route than many Mustang enthusiasts at that time. “We had worked out a deal with Raceline wheels–they had produced this 18-inch multi-spoke wheel that I really liked, so I decided to use a set on this car–9 inches wide on the front, 10 inches on the rear. They’re traditional two-piece wheels, but the design really complimented the car.” Polished spinners were a nice finishing touch, working well with the aluminum lips and black centers. Chosen tires were Goodyear Eagle F1s, 275/40/ZR18s for steering, 295/35ZR18s for traction.

Probably the hardest part of the build was the interior. “This took the most time,” says Hoag. “We wanted a signature look, and the carbon fiber theme from the 2003 Anniversary Cobra was a good one, though we wanted to carry it a step further.” So although he managed to pirate an anniversary steering wheel, parking brake handle and shifter boot, the theme of carbon fiber was carried over to the seats, door panels and even the convertible light bar. “We swapped the stock front seats for Recaros and both the bottom and back center sections of these and the rear bench were upholstered with a special carbon weave upholstery.” Because attention to detail is a mantra at MRT, the Cobra received special Recaro inserts on the rear bench that matched those on the front buckets. As the interior was coming together, so was a sound system.

Given the car’s Zinc Yellow paint, something suitably loud was essential. Enter a Kicker audio setup with speakers installed in color keyed panels and subwoofers in the trunk. At higher volumes the sound is literally strong enough to shake the ground beneath the car and break a few windows in the surrounding buildings–so in other words just right. Clearly Mike and Tony at Car Tunes did their homework with this one.

To get the convertible to exactly where he wanted it, Hoag added a few additional touches, MRT’s Bullitt-wing rear deck spoiler, motorcycle style fuel filler door, tinted taillight lenses (with sequential signals), gas struts for the hood and a contrasting striping package, courtesy Artworks in nearby White Lake. This features a blacked out center hood scoop with a yellow divider and additional stripes that run from the foglight housings around to the rocker panels on each side of the car. But the piece de resistance? Why a custom made surfboard and Nitrous system, which led rise to the car’s name–Surfchaser. “Even though I live in Michigan, with the color and performance, we were really aiming for a West Coast theme–how to get to the beach as fast as possible–Surfchaser just seemed appropriate. I thought the surfboard would be a perfect addition.”

Hoag started out by searching the local classifieds for a board, but came up with nothing, “Here in Michigan, if anybody is going to do anything on the water, it’s boating or wakeboarding, we just don’t tend to have big enough waves.” His quest for serious surf equipment, appropriately led him to the West Coast and Los Angeles based Ocean Gear. “They were able to supply us with a custom sized board to match the profile of the car, which was painted to match–it also proved to be the perfect addition for displaying the logos of all our sponsors and participants on this project.” And as for the nitrous? Well the crew at Nitrous Express, supplied Scott and company with twin bottles of laughing gas, designed to deliver a healthy 125 extra horsepower, mounted in the trunk and surrounded by all that fancy stereo hardware.

And sure enough, when the Surfchaser was strapped to the dyno, it delivered almost 600 hp to the tires, essentially with a stock engine, exhaust and the nitrous. Making its public debut at the SEMA show in the fall of 2003 at the Goodyear tire booth, the Surfchaser proved a favorite with attendees. It has since become one of MRT’s most recognizable show cars and although it’s now “officially” in retirement, Scott and wife Lisa can’t resist the urge to take it for a spin once in a while. “It’s still essentially the same as when it was at SEMA back in November ’03,” says Scott. “It’s even got the same F1 rubber on it. All I do is essentially clean it, service it and put air in the tires. But when the summer comes here in Michigan and we want to head out for dinner in one of our cars on a weekend, both Lisa and I know exactly which set of keys we’re going to grab.” 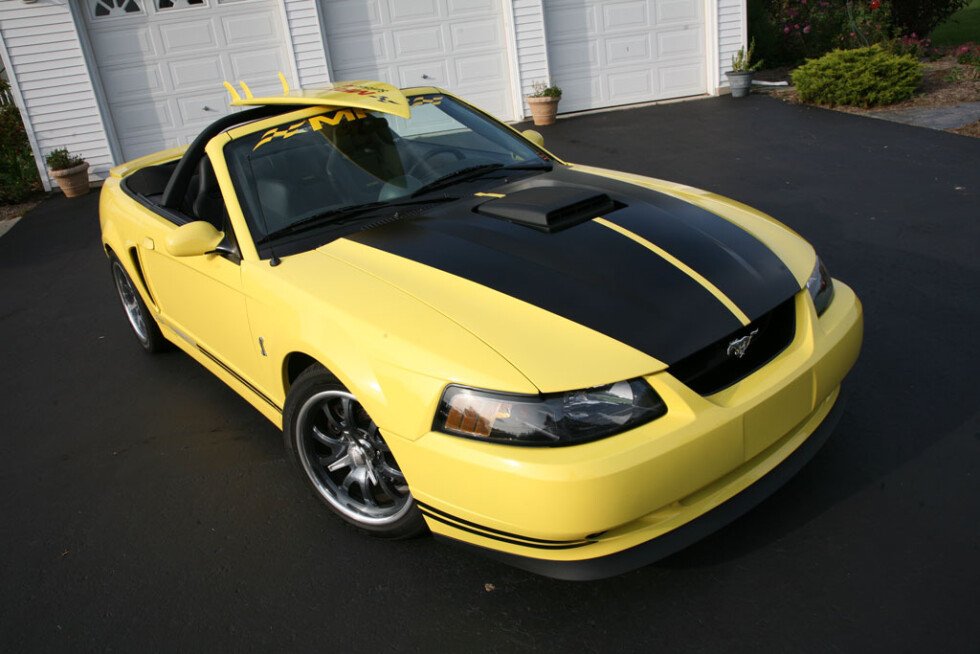