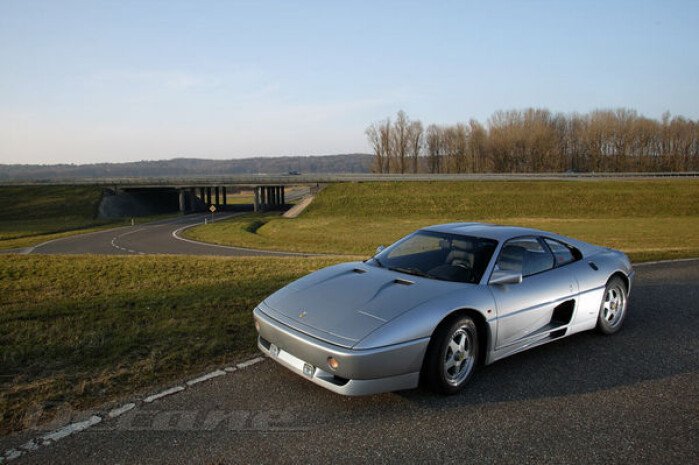 Jumping from one foot to the other in a bid to keep blood flowing, I’m trying to keep the biting wind chill at bay. The sky in eastern Holland is pewter, having morphed from crisp winter sun into moody TV detective show weather in an instant. We’re in the middle of somewhere, parked on what may well be a bicycle lane if the looks of disapproval are anything to go by, and the snapper is getting his groove on as he finds yet another detail to shoot. This car is brimming with them, each new camera angle prompting further animation. We may be here some time. It’s almost as though its designer didn’t know when to stop.

All of which is to be expected of a Zagato product. The outside world has been pressing in for almost a century, yet this Milanese styling house invariably does things its own way, which often results in landmark works of design artistry. However, the flip side is also true, especially  when it comes to Ferraris. Among Prancing Horse worshippers, the name Zagato is employed contemptuously in some quarters and with rectorial earnestness in others. For every 250GTZ there’s a (shudder) 3Z Spider. The occasional lapse in credibility serves only to make the Terrazzano di Rho concern compelling to the rest of us. Consistency is so overrated.

The brilliantly named 348tb Elaborazione is a case in point. Unconventionally attractive to some, conventionally unattractive to others, it is undeniably striking. A touch fanciful perhaps,  but its influence is still being felt. For all its  bijou following, this car matters more for what it led to as for what it actually achieved.

But first of all you have to consider the donor car. In marque lore, the 348 languishes in a netherworld between used car status and classic-dom. Purists moan that it lacks the aesthetic purity of the 328 it replaced, while others carp about its lack of dynamic ability compared with the 355 it spawned. Even company supremo Luca di Montezemolo went on record at the 360 launch, saying ‘Ferrari won’t be making any more mistakes like the 348’. It’s been on a losing streak since it broke cover in ’89.

Yet the 348 wasn’t a bad car per se, and Zagato’s offering served as an alternative to the Pininfarina-styled original. Introduced at the 1991 Geneva Motor Show, the Elaborazione was intended from the outset as a series product, all things being relative, although such was the number of divergences in detail between cars that it effectively became a string of one-offs.

Here was the first Zagato Ferrari since  the NART-sponsored, 330GTC-based 3000 Convertible of 1974. Built with tacit approval from Maranello, around 40 changes were made to the regular 348tb’s body shell. However, there were  no alterations to the basic structure, as the hard points had to remain the same due to  homologation requirements. The styling is often attributed to Ercole Spada yet was actually the work of Marco Pedracini, whose resume also includes the glorious Lancia Hyena.

Retaining a few Zagato design staples, not least the corporate double-bubble roof, this was a comprehensive remodelling. Up front, the regular 348’s grille – in place merely to keep luggage cool – was replaced with a bizarre-looking oval blanking plate that housed the fog lights. Similarly, the sidelights made way for four circular lenses, while the new aluminium hood featured two very racy NACA ducts.

Moving further back, the stylised creases that ran aft of the top of the wings were denuded, newly sculpted doorskins eliminated the Testarossa-style strakes, and the new mirrors were more compact than the stalk-mounted originals. At the rear, a 4mm-thick heat-resistant glass panel was worked into the deck lid and an electrically adjustable spoiler incorporated, along with round lamp clusters. The latter were in place of the chunky slatted lenses that polarised opinion on the regular car. Split-rim OZ alloys completed the transformation.

Inside, suede covered the door panels, lower dash, headlining and rear bulkhead in addition to the Zagato Design steering wheel. The factory-original seats, meanwhile, have gained larger side bolsters. Also present on the prototype was a wide-angled ‘telecamera’ installed above the rear screen and linked to a 3 inch color monitor mounted above the central tunnel, which also performed as a regular television.

Costing roughly two-and-a-half times the price of a standard 348, this was a super-exclusive product and one that required punters to deliver a donor car to Milan. Just ten did so up to ’93, with one targa-roofed example going to former works Lancia driver Giorgio Schon. This was some way short of the run of 22 cars once envisaged, and plans to offer the Testarossa-based FZ93 as a sister model came to nought as the pauperized firm stared down extinction. The car pictured here was the last made, built at the behest of Lancia Hyena instigator Paul Koot.

Though still recognizable as a 348, the Elaborazione could only be a Zagato product. The sole example finished in silver, this one appears positively discreet in comparison with some of the more outre colour schemes inflicted in period. It was conceived at a time when the likes of Willie Koenig set about obliterating subtlety with comedy spoilers and other plastic addenda – the Koenig Specials F48 really was quite ghastly. Zagato’s amplified razzmatazz works well for the most part. Sure, some of the visuals are time-expired but they still intrigue. You could also argue that many of the cues you see here were subsequently – maybe even surreptitiously – adopted on regular production Ferraris.

First of all, those side ducts are pure 355. It’s  not unreasonable to suggest that Pininfarina looked closely at this styling treatment. Same  too for the rear lighting arrangement. And the positioning of the Cavallino Rampante badge,  for that matter. The 348’s replacement didn’t arrive until 1994, after all. Happenstance?  Maybe, but the transparent engine cover is remarkably similar to that of the 360 Modena Spider, which emerged in 2000. It at least has the makings of a conspiracy theory.

This car’s front end is significantly different to the Elaborazione prototype’s, with indicators housed in the bumper but not the secondary driving lights, while the odd oval center panel is mercifully absent. From front-quarter or side-on, it’s within the realms of the normal. Move further back, however, and the exposed fuel-filler cap on the left-hand flank provides a strong racer reference point, while the vents aft of the rear wheel arches scream 288GTO.

And the styling really does scream out back, any semblance of restraint bolting for the door. The see-through engine cover is the start of it; slats, apertures and openings dissipating heat and bolstering its supercar-plus-a-bit posturing.

Once inside, it’s much as you remember a 348tb, with an inviting wraparound dash, secondary gauges housed in a center console and the obligatory polished H-gate. The Zagato wheel is attractive, more so than the trippy orange-on-black instruments it fronts. The firm seats support in the right places, but the wheel wells intrude on legroom, hence the steep pedal offset. It lacks many of the more out-there features of the Elaborazione prototype, not least the TV, but it’s all the better for it.

And there’s none of the old-school theatrics on start-up: it’s all sorted by multi-point fuel-injection. Keep your foot off the throttle, turn the key a quarter and the 32-valve V8 comes alive with surprisingly little drama; idling at 1000rpm, it emits a coarse, resonant backbeat. First is to the left and back and there’s a strong spring-loading between second and third. The shift action is baulky in time-honoured Ferrari tradition but immensely satisfying with familiarity. Each gearchange ushers in more commotion as the exhaust note hardens in time with the howling valvegear and wailing cams. At speed it sounds glorious, running the sonic spectrum from strident to downright frenzied.

Zagato stopped short of giving the 348 more power. It didn’t need to, the regular car producing a purported 300bhp at 7200rpm. Ferrari claimed a top speed of 171mph in standard form and 0-60mph in 5.6sec, which made it a couple of tenths faster than a Testarossa. It feels at least that quick, helped by the low gearing, yet remains perfectly tractable.

That said, the 348 was saddled with a reputation for waywardness, but now it’s hard to see what the fuss was about. The steering, with just 3.2 turns lock-to-lock, is super-accurate, although it reacts nervously to camber changes. The structure feels rigid, and the ride a little harsh – but that comes with the territory.

This is a car you control as much by the throttle as by steering input. In fast sweepers, the suspension loads up swiftly and, should you apply too much power exiting a tight corner, the tail twitches slightly, but it’s more progressive than the 328 it replaced. Such is the grip from the fat Bridgestones, you’re unlikely to discover the point of no return without venturing trackside, while the ABS-assisted discs offer massive retardation. The 348 isn’t relaxing to drive, and demands your attention at speed, but on so many levels that’s how a supercar should be.

In the Ferrari caste system, the Elaborazione is a curio that even in period went largely unnoticed outside a tiny circle of enthusiasts – most of whom still own them. If nothing else, it helped re-establish a link between Maranello and the most characterful of styling houses. Most recently this resulted in the lovely 575GTZ and Barchetta Zagato. Often off-trend rather than on it, Zagato has never been one for aesthetic pedestrianism and that is certainly true of this car. It may languish in obscurity, but experiencing the Elaborazione will lodge in your memory, mostly for the right reasons. 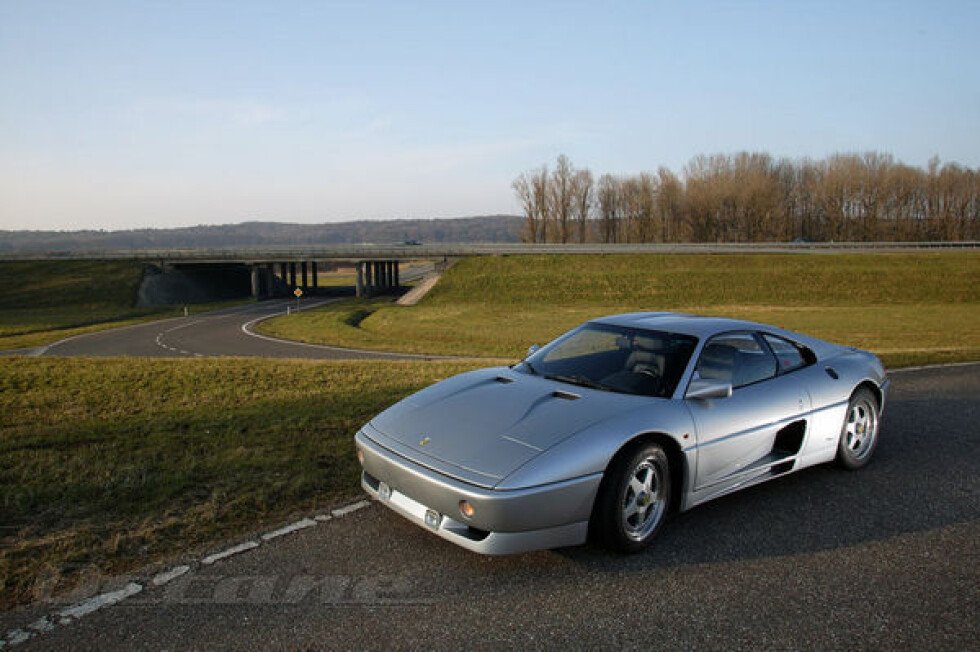