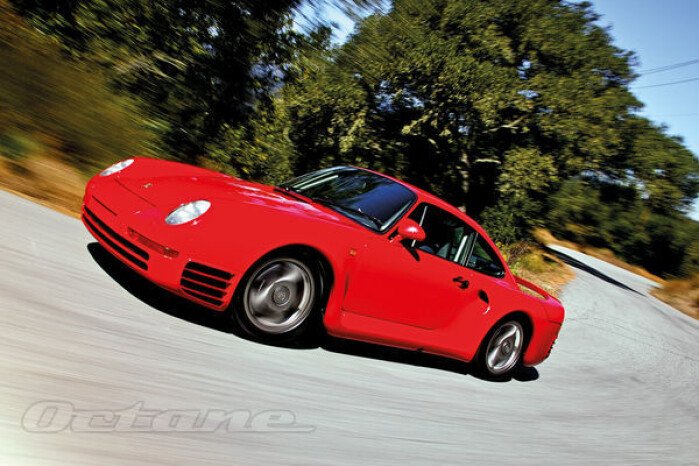 Why not? Because Porsche tried to make the 959 too good, but then cut development before it was as good as it should have been. Developed partly as an exercise to see how far the rear-engined layout of the 911 could be taken, and eventually released to customers in 1987, the 959 ended up with aluminium and composite panels on a steel shell, torque-adjusting four-wheel drive, speed-sensitive height-adjustable suspension, improved aerodynamics, and a development of the air-cooled flat-six that used water-cooled cylinder heads with four valves per cylinder, titanium con-rods and gear-driven cams, plus twin sequential turbos with electronic engine management, to produce 444bhp and 369lb ft of torque.

The result was a true supercar capable (in Sport form) of reaching 60mph from rest in 3.7 seconds and a top speed of 197mph. The Gruppe B – the competition car that spawned the road car – was never given a chance to prove itself in the planned Group B racing series, because only Porsche and Ferrari actually built viable contenders, but one finished seventh overall and won its class in the 1986 Le Mans, while clever (and rather unlikely) development turned it into one of the all-time great rally cars, resulting in first and second on the 1986 Paris-Dakar, in Rothmans livery.

There were problems, though. The 959 was never approved for the crucial North American market, and niggling flaws in the 959’s design took the edge off ownership for those who’d paid the £150,000 asking price. Still, as the 959 is rightly revered as a collector’s item, with just 263 built, not all current owners are too worried about that – but if they are, there’s a holy grail of 959 development, and that’s what we’re here to see.

This is where we introduce the main protaganist in this story, race driver Bruce Canepa – a veteran of the 24 Hours of Daytona, Pikes Peak, Laguna Seca and much more, mostly in Porsches. He co-drove the famous MOMO team Porsche 935 with Gianpiero Moretti, and the March GTP ground effects prototype with Bobby Rahal and Jim Trueman. He also drove a 7-ton race truck up the Pikes Peak hillclimb in 13min 57sec, a record that still holds today. Now he competes in historic racing.

Bruce is also CEO of Canepa, a massive automotive company in Scotts Valley, California, that restores, maintains, builds and re-engineers everything from historic race cars to scratch-built hot rods. Back in 1987 Bruce bought a 959 but was unable to bring it into the USA due to crash test and emissions laws. Microsoft’s Bill Gates and Paul Allen did the same, and the three of them hired a law firm to pass a bill that would allow cars of special interest into the States on a ‘Show and Display’ basis – a landmark ruling.

But, of course, once he’d finally got his 959, Bruce found there were certain shortcomings caused by the lack of development time that he wanted to rectify. ‘Once Porsche got the 959 into production they realized that they would be losing money on the car, and then cut off development,’ explains Bruce. Where this shows is in the detail: the clutch is heavy, the heater and air conditioning switches tend to fail, the oil pump is prone to leaks. But it was obvious that the basics were really strong, and that was even more frustrating to Bruce because he could see there was so much potential for higher performance – and he wanted to drive it for more than just ‘show and display’.

The 959’s engine, based on the 911 flat-six of the time, had first been developed for the ‘Moby Dick’ 935 race car, then further developed for Porsche’s short-lived Indy car project, before being tweaked to comply with Group B racing. It used water-cooled four-valve cylinder heads on top of the more recognizable air-cooled block and was built to 2850cc, rather than the usual 3.2 litres of contemporary 911 engines, to keep it within Group B rules (which stipulated a maximum 4-litre capacity but imposed a multiplication factor of 1.4 for turbocharged engines).

‘The 959 road car runs what is basically a race engine,’ confirms Bruce. ‘Because of that it’s hard to get emissions legal, but I wanted a car that would meet California and Federal emissions standards. We tried EGR [exhaust gas recirculation] and cats but that lost us 100bhp – some people tried the same and lost 150-200bhp! We realized it was going to need serious development.

‘Porsche worked with us, especially with the sequential turbos. We found the engine didn’t get to full boost until 3700rpm. The first turbo would boost up, then bleed air to the second turbo, which would stall the first turbo causing a drop-off of about 100bhp, then it would start all over again. We spoke to the guys at Weissach [Porsche factory] and they just laughed and said “Yes, we never did that again!”’

It’s easy to understand the thinking back then, though, because the first-generation 911 Turbo had developed a fearsome reputation, coming into boost with a bang (after a frustrating lag) and gaining a name for sending heavy-footed owners off the road mid-corner, usually backwards.

Turbo technology moved on and the lag was reduced, but a sequential  setup, coupled with unusually sophisticated engine management systems for the time, seemed to be a way of overcoming the lag problem altogether. Of course, since the 1980s turbo technology has evolved still further, and the Canepa team decided to use this to its advantage, switching to a conventional twin-turbo set-up but using state-of-the-art Garrett ‘Disco Potato’ ballbearing turbos. (Not heard of the Disco Potato? It was a Nissan Sentra race car, painted in a pyschedelic brown, which ran a new design of compact turbocharger, using a ballbearing cartridge that gave much greater reliability and responsiveness, for reduced turbo lag.) To the twin turbos, Canepa added redesigned wastegates with special diaphragms from TiAL Sport, and titanium heat shields.

To complement this new set up, the cam timing was optimised, new intake runners matched to K&N air filters, the fuel system upgraded, and modern engine management fitted. The engine wiring was replaced, using Formula 1 specification harnesses, plus new sensors, connectors and shielding and a new high-output ignition system – 369 new components in all! Add to that a new stainless steel exhaust, using original Porsche catalytic convertors and a bypass valve to allow a more aggressive note controlled by a switch on the dashboard, and you can see how extensive the redevelopment was. The finishing touch to the powertrain is a new clutch assembly for better feel, using a redesigned pedal mechanism and improved pressure plate.

Bruce has chosen to give the first demonstration of just how well all this works, trundling smoothly out of the built-up areas around the Canepa HQ and then gunning it down a sharply curved slip-road onto the highway. He’s taking no prisoners, while in the passenger seat I’m doing my best to peel my face off the side window. It’s not just the sheer acceleration that’s impressive but the grip – the phenomenal grip – and the way it sticks to its line regardless of the bumps.

This particular 959 is one of only 29 Sport models built, so it doesn’t have the height-adjustable suspension of the Komfort model (‘a marketing gimmick’ says Bruce), but all 959s have a double wishbone set-up, totally different from the 911’s. In fact, Canepa strips out the Komfort model’s suspension and – to both Sport and Komfort – fits a modified version of the Sport’s much simpler coilover suspension, using titanium springs and dampers, built in-house with three-way valves to Canepa’s specification. That cuts 70kg from the Komfort, much of it in crucial unsprung weight, which helps with the Canepa car’s remarkable composure, as do modern-specification Z-rated Michelins (Canepa modifies the 959’s magnesium 17in wheels to take conventional tires in place of the original runflats).

‘It just squats, rips, grips and goes!’ grins Bruce as we catapult down the highway at such ridiculous speed that the fortunately sparse traffic seems  to be travelling in reverse. ‘It really is the most manageable car in the world.  It’s totally stable at well over 200mph.’

Later, when Bruce has had his fun in the 959, we drop him off back at HQ and head out to the canyon roads. The tarmac is rough and the sun is now beating down mercilessly, but  the 959 is unfazed and we make swift progress – with the exhaust bypass valve in ‘quiet’ mode, this is an incredibly civilized machine, riding the bumps, cruising effortlessly at high speed and reacting to every driver input, yet providing neck-straining acceleration and grin-fixing thrills on demand. What a machine!

It’s reckoned every Porsche 959 was sold for just half of what it cost to build, but the technology developed for it can be credited for the against-the-odds survival of the 911, proving that the eccentric rear-engined layout could be made to work – and 20 years on we know the 911 is still a force  to be reckoned with.

The Canepa cars only demonstrate how good the 959 was in the first place. Sure, had Porsche stuck with the development a little longer, it would have produced an even better machine, but it’s the application of more modern turbocharging, fuelling and engine management technology – as well as some really thoughtful engineering – that’s made the Canepa 959 such an improvement on the original.

Sometimes, with a car as rare as a 959, it’s best to stay away from modifications; but in this case the changes simply show what the 959 should always have been capable of, and really add to the driving experience. If I had any doubts, they were dispelled every time the 959 accelerated, the flat-six spinning-up fast, the tires gripping hard, and the landscape passing by at warp speed. The greatest-ever iteration of the 911? Could be. 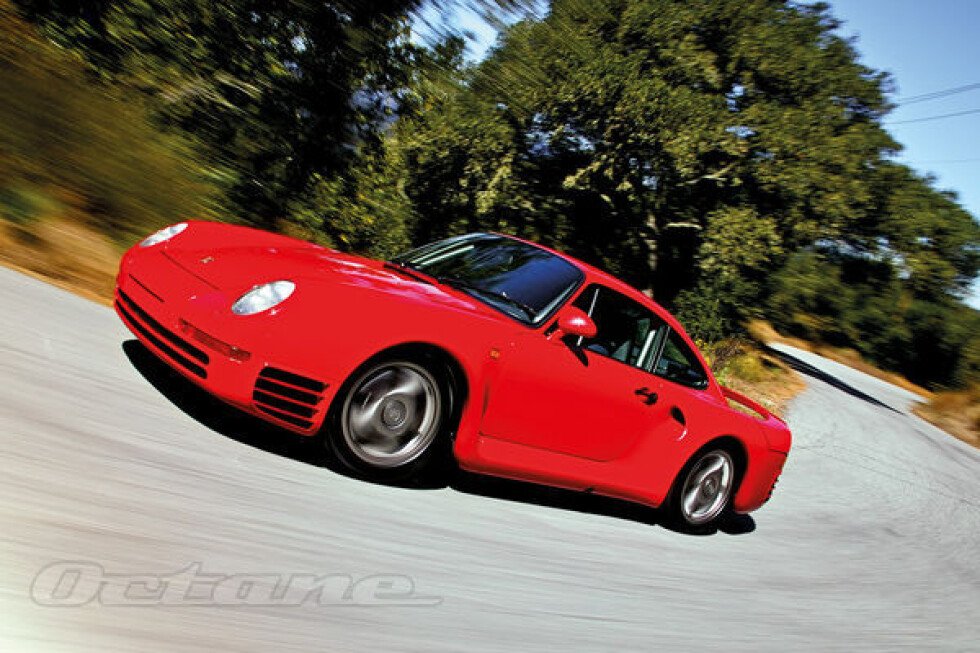