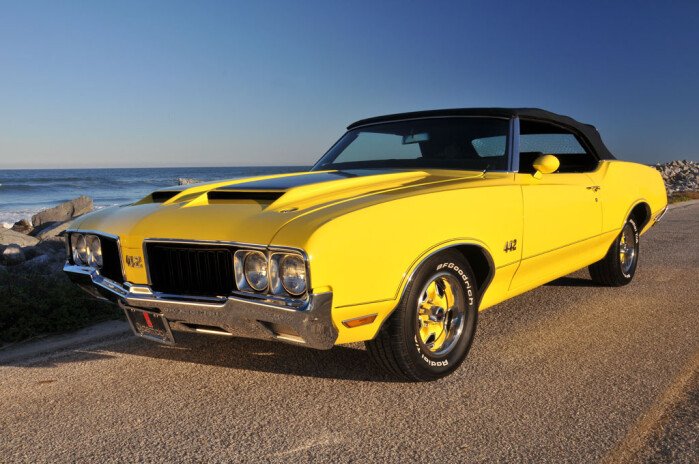 
In 1949, Oldsmobile joined Cadillac as General Motors’ only vehicles powered by an overhead-valve V-8. With 303 cubic inches and 135 horsepower, Oldsmobiles with the Rocket V-8 evolved into GM’s first factory hot rod. Throughout the 1950s and early 1960s, Oldsmobile changed focus and became more of a family car rather than a performance machine. In 1964, the Oldsmobile division decided to revive its performance image by releasing the 442 option to the Cutlass line. The 442 signified the engine’s four-barrel carb, four-speed manual transmission, and dual exhaust. Oldsmobile’s new mid-size vehicle competed well with the other mid-sized performance cars of the time.

Over the next several years, Oldsmobile continued to refine the 442 powertrain and gained a reputation for outstanding performance. By 1969, the 442 was considered to be one of the best factory hot rods. The icing on the cake was the release of the W-30 Ram Air package for the 400 cubic-inch engine. Rated at 360 horsepower, the ram air 442 tore up dragstrips every weekend. A corporate change for 1970 allowed mid-size vehicles to exceed 400 cubic inches. The change escalated the 442 into a factory supercar.

Not wasting any time, Oldsmobile chose the stump-pulling, 455 cubic-inch big-block for the 1970 442. With a nudge and a wink, factory horsepower increased to 365, a very conservative number considering the additional 55 cubes. Every 442 engine was blueprinted at the factory. The optional W-30 package further increased horsepower to 370. Ordering a W-30 gave customers a functional ram-air hood, plastic inner fender linings, aluminum intake manifold, special cam, and low-restriction exhaust.

Exterior changes were minimal: The front end received a mild facelift using a bright, vertical grille. Headlamp bezels received the same bright finish. A front bumper included twin air inlets in place of the one large inlet of 1969. A W25 fiberglass hood with twin scoops was available with or without the W-30 option. The front fender-to-quarter panel side molding was deleted. Twin taillamps moved into the rear bumper. Quarter panel side marker lamps were placed lower in the quarter panel. All 442 convertibles received new kicked up quarter panels that increased the bold look.

Inside, the 442 was considered a luxury vehicle. Comfortable seats, premium door panels, and a new, easy-to-read, three-pod instrument panel provided a total luxury package. Bench seats were standard, with bucket seats and a center console on the option list. A litany of luxury options were available to suit any buyer.

Oldsmobile backed up the performance of the 442 with a very popular Dr. Oldsmobile ad campaign. Dr. Oldsmobile and his cast of wacky characters sang the virtues of the “W” machine. Many considered them the most outrageous advertisements for a factory muscle car since the launch of the GTO. The ad campaign proved to be the catalyst in branding the 442 as a true performance car.

Looking back, the 1970 Olds 442 was perhaps the best-balanced mid-size performance car among the GM divisions. The combination of outstanding performance, firm yet comfortable handling, and stellar styling proved Olds understood the needs of the buying public. Nineteen seventy secured Oldsmobile’s place during the heady days of the factory muscle car wars and the 442 proved it was not just competitor, but a leader of the pack.

Special thanks to Floridian Craig Cocking for allowing us to photograph his drop-top 442.


Insurance cost
Insurance cost is $231/year for a $25,700 1970 Oldsmobile 442 Convertible. This is based on 3,000 miles per year of pleasure driving.
*Based on a quote from Heacock Classic Car Insurance, www.heacockclassic.com


Engine – Oldsmobile’s 455–while not considered high revving–provided brute torque throughout a wide rpm range (and a whopping 500 lb-ft at 3,000 rpm). It was understood that the factory horsepower was grossly underrated.


Handling – The Oldsmobile brand historically meant a soft and luxurious ride. The 442 managed to combine a luxurious yet firm ride. It was perhaps the best street-handling vehicle among the GM divisions.


Vehicle Category
Most Oldsmobile 442s are driven on a semi-regular basis. Owners enjoy showing off their cars as the alternative to a Chevelle Super Sport or Pontiac GTO. Very few are trailer queens.


Review
The 1970 Oldsmobile 442 was at the pinnacle of the performance car era. General Motors engineers combined incredible performance with luxury car handling and state-of-the-art styling. Few cars can match the total driving experience of the 442. 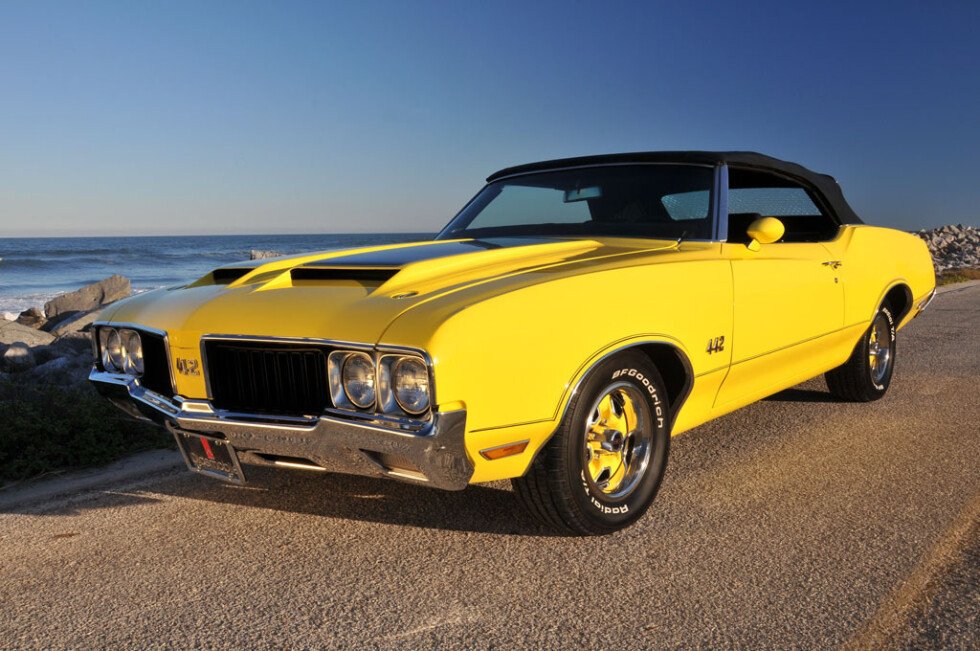