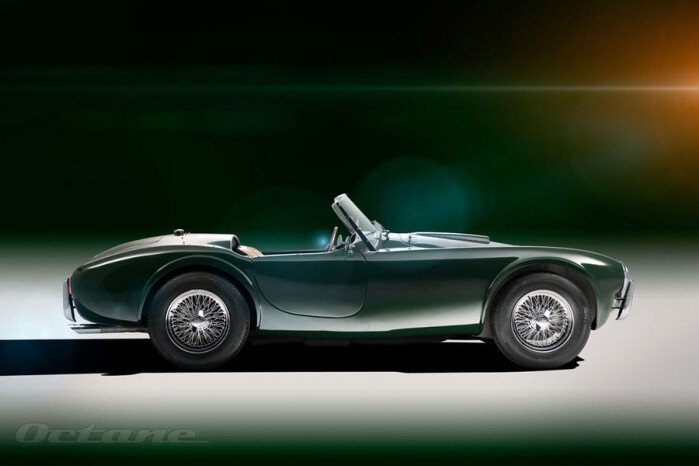 ‘If I’ve done anything worthwhile, it’s only to bring things – and people – together. Like the V8 engine and the AC chassis,’ says Carroll Shelby. Little did AC Cars’ owners, the Hurlock brothers, know in the early 1960s that their small and rather Dickensian Ferry Works in Thames Ditton, Surrey, was about to be turned upside down with the arrival of a Le Mans-winning Texan chicken farmer.

The AC Ace was a lightweight roadster with  a simple ladder-frame chassis designed by  John Tojeiro, with 3 inch-diameter tubes and cross-bracing and box structures at each end, to  which the transverse leaf spring independent suspension was attached. The beautiful aluminium coachwork was riveted to the longitudinal frame and to various steel hoops that defined the body’s shape. Just over 1000 were built from 1953 but, by the early 1960s, things were looking slow at Thames Ditton. Then Ol’ Shel’ bowled up and requested 100 chassis! The Hurlock brothers were quids in.

Carroll Shelby had success competing at major road racing circuits in America in the 1950s, driving every high-performance car he could get his lanky frame into – Jaguars, Allards, Ferraris, Maseratis, Porsches, Aston Martins – against the world’s best drivers, including Fangio, Collins and Moss. According to his fellow driver Roy Salvadori: ‘Shelby was a really good driver and he won race after race. He was fast, cool and kind on the machinery.’

Back then, Le Mans was the greatest motor race in the world, and Shelby teamed up with Roy Salvadori for the 1959 race and won in the Aston Martin DBR1. ‘I drove race cars for nine years. Eight years of that I spent wanting to build my own car,’ he says. ‘I got lucky at Le Mans. That was the stepping stone that got me enough notoriety to go to different companies with my dream of building a car.’

In 1960 Shelby announced his retirement as he was suffering from the hereditary heart disease angina pectoris. He sold his Dallas sports car dealership, moved to Southern California – once the epicenter of the wartime aviation industry and thereafter the hotbed of hot-rodding and racing car fabrication. He became the distributor for Goodyear tires, set up a racing school at Riverside circuit, and the idea of creating his own car bubbled to the surface. ‘The name Cobra came to me when I was thinking about creating a sports car. I can’t explain why. All through the years of trying to put this thing together, I never changed my mind and never doubted I would call my car the Cobra,’ he says.

As chronicled in the excellent Dave Friedman and John Christy book Carroll Shelby’s Racing Cobra, there was a hotel on Hollywood Boulevard called the Hollywood Inn. It served a delicious New York steak sandwich, charbroiled to perfection, along with an ice cold Martini, all for ten bucks! It’s where ‘the plan’ materialised, leading in just three years to America’s most desirable sports cars taking the first American World Championship.

In 1961 Shelby was broke but still well connected. One of his many friends was Wally Parks, editor of Sports Car Graphic magazine, who hired Shelby to write a column on his racing school, which invited respondents to send a dollar for a brochure. Every Thursday Carroll would empty the mail drop and take the editorial team to the Hollywood Inn for ‘an editorial meeting’ and to discuss ‘the plan’: to build a production sports car with a proprietary engine.

He approached Chevrolet first but the Corvette was doing just fine and Chevrolet had its own racing plans. The Ford Motor Company had just developed its lightweight smallblock, thin-walled V8, beginning with a displacement of 221ci (3621cc), and Shelby met Dave Evans (who was in charge of Ford’s stock car racing program) at the July Fourth Pikes Peak hillclimb, outlined the plan and persuaded Evans to ship him two engines for ‘development purposes’. Initially the thought was to insert the V8 into an Austin-Healey, but that was rejected as being obsolete.

Then two press releases crossed the desk at Sports Car Graphic. First was an advisory that Ford’s 221ci V8 was to be phased out and production of the 260 and 289 increased. And second was that the Bristol Aeroplane Company had ceased production of the engine used by AC. As well as competing at Le Mans in ’58 and ’59, the SCCA E-Production class had been dominated by the AC Bristol, with its sweet two-liter straight-six and effective all-independent suspension.

After a few Martinis the conversation turned to tuner Ken Rudd stuffing British Ford Zephyr engines into the AC chassis. ‘Oh, is he,’ said Shelby. ‘Have another drink… and keep talking.’

And so ‘the plan’ was hatched. Over the next couple of months Shelby travelled between Detroit and Thames Ditton and, at the beginning of 1962, Evans shipped a 260ci V8, complete with four-speed Borg Warner gearbox, to AC – but Evans was yet to talk to Don Frey (in charge of Ford’s advanced engineering planning) about the deal.

Fortunately Frey was a keen sports car enthusiast and not your usual Ford suit. Like Evans, he thought Shelby was ‘one of those Texan millionaires’. When they found out that ‘Shelby sure as hell doesn’t have a dime – all he has is a good idea’, Shelby wrote to Evans and explained: ‘I am anything but rich and am faced with the choice of asking Ford for help or taking in investors, which I’d rather not do.’ It struck a sympathetic nerve at Ford, which was soon picking up Shelby’s modest expenses.

Shelby, the Hurlock brothers and their nephew Derek fitted the 260ci V8 into the AC chassis in January 1962 – and immediately discovered that it was too much for the running gear. So it was beefed up and the prototype was tested at Silverstone. Its top speed was 150mph, it stopped in a straight line and could be hauled around corners impressively.

Former AC engineer Alan Turner worked in the design office at the AC works in Thames Ditton at the time, managing the production line. In 2005 he said: ‘It was just the next job to be done and we called it the Ace 3.6. It created a stir, because it meant there was work some way ahead. It was strange to be sending chassis to America, but we were a flexible company: we’d built golf trolleys and fire engines before. I’ve been a passenger in a few Cobras and they’re good enough.’

Next Ford had to be sold on the actual car, so chassis number CSX0001 (Carroll Shelby Export No 1) was constructed and put on a ship to Los Angeles. Ford signed a letter of agreement on 5 February 1962: it would supply the engine and gearbox and Shelby would add ‘Powered by Ford’ badges to each side of the cars. Charles Hurlock’s modest request was that the AC badge remained on the car and he would supply the basic body/chassis needed, initially on credit.

CSX0001 arrived at Dean Moon’s Santa Fe workshop, where it was fitted with a hot 260 engine, serial number XHP-260-1. It featured a Holley four-barrel carburettor, increased compression and a high-lift solid-lifter cam. Evans was treated to a drive in the bare ally car and the result was an invitation to the New York Motor Show. Shelby had the bodywork painted a very bright yellow for maximum impact on the show stand and the orders rolled in. CSX0001 starred on many magazine covers and remains one of the most used sports cars of its era.

Chassis number CSX0002 soon arrived from England and received engine number XHP-260-8, becoming the first Cobra racing car. Shelby had taken on Phil Remington as his chief mechanic, fabricator and constructor and they set to the car. Photos, dimensions and specifications were submitted to the FIA for GT class homologation, with optional equipment listed as a ram manifold, side-draught 58mm Weber carburettors, Flame Thrower ignition, engine hood scoop, 37.5-gallon (US) fuel tank and roll hoop. The rules required 100 cars within 12 months and, although only eight had been constructed by the August, a bit of rule-bending saw the Cobra ready to compete in the over 2.0-liter class of the FIA Manufacturers’ Championship, which included Nürburgring, Sebring and, of course, Le Mans.

The Cobra’s first race was at Riverside on 13 October 1962. Bill Krause was driving in the three-hour production car race against Ford’s bitter rival Chevrolet with its new Corvette Sting Ray. The Cobra pulled clean away from the Sting Rays and led the race until a rear stub axle broke and the wheel fell off. Chevrolet was shocked; Ford was impressed; the Cobra had huge potential.

At the Nassau Speed Week, the Cobra ran second behind Shelby’s nemesis, Enzo Ferrari’s GTO, until a tie-rod end broke. In the second GT race the Cobra was again second behind a GTO when it ran out of petrol… Finally, on 3 February 1963 at Riverside, a Cobra claimed its first victory, with Dave MacDonald first and Ken Miles second, ahead of the Corvettes. In September Dan Gurney won at Bridgehampton, the first time an American driver won an FIA race in an American car.

‘I thought we’d build 100 cars and that would be the end of it. But we ended up building more than 600 of the things!’ says Shelby. In total some 660 leaf-spring Cobras were produced. The first 75 had the 260ci V8, soon replaced by the 289. The Cobra legend was cast forever in motor sport lore.

Thanks to Peter Bradfield Ltd for providing the Cobra, www.peterbradfieldcars.com. 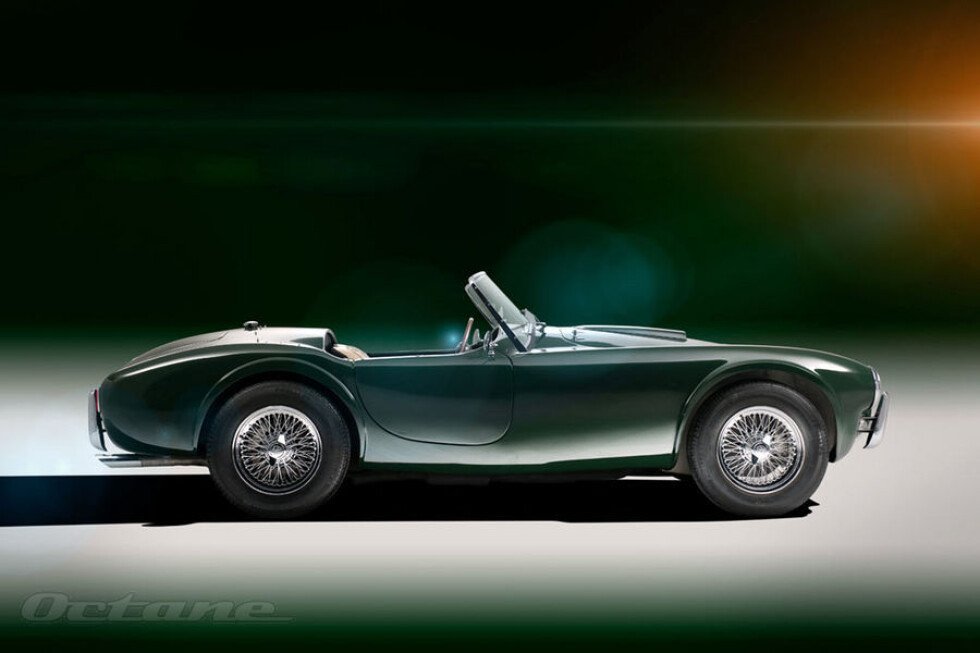