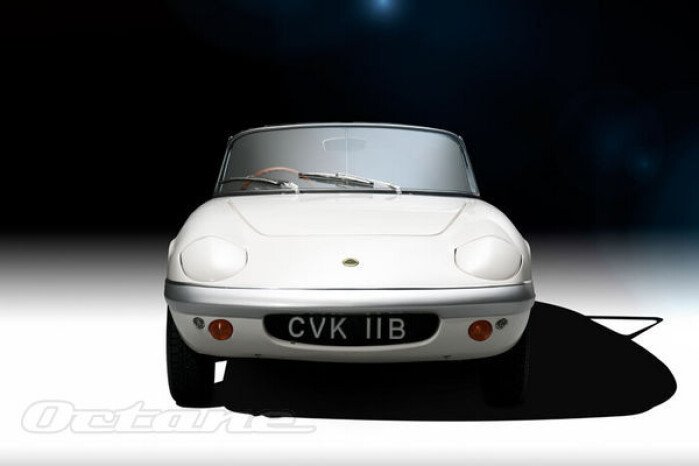 Looking at Allan Warburton’s gorgeous, immaculate Series 1 Elan pictured here, it’s hard to believe that the Elan’s looks were not universally admired when new. ‘A functional-looking car rather than an aesthetically stimulating one,’ sniffed Car magazine in 1966; while the never-knowingly-understated LJK Setright wrote in Motoring Life that ‘perhaps it was a little like a centaur – splendid below the waist but rather off-putting above’. And this was a qualification to his statement two sentences earlier that the Elan was ‘aesthetically vile but commercially viable’. (Feel free to insert your own mental exclamation mark at this point.)

The trouble was, the Elan had one huge – or, more accurately, tiny – obstacle to overcome when it was launched: it was superseding the much-loved Elite. Also made of fiberglass, also with superb road dynamics, and in a stunningly pretty coupe package. Sadly, those looks had been achieved at the expense of practicality by the user, and Lotus’s expense in the making. Hence Setright’s comment about the Elan’s saving grace being commercial viability.

The Elite, launched in 1957, was a truly revolutionary car. Based on a fiberglass monocoque – no chassis – it featured Colin Chapman’s own design of independent suspension, disc brakes all round, and a light alloy SOHC engine that gave 75bhp (net) from just 1216cc. Designed by City accountant Peter Kirwan-Taylor and ex-Ford stylist John Frayling, the Elite’s shape was beautifully clean and understated, and it seemed only fitting that the majority of Elite fiberglass bodies were laid up by the Bristol Aircraft Company at their Filton aerodrome works.

But, while the Elite’s monocoque was a masterpiece of design and structure, it was extremely costly to manufacture because it was very labor intensive. And while you can get away with charging a premium price for a luxury product, the Elite was anything but luxurious; buyers were effectively getting a stripped-out racer masquerading as a sophisticated coupe. So, while the Elite won an enthusiastic customer base, it wasn’t ever going to make Lotus any money.

Hence the arrival of the Elan. According to that Car article in 1966, it was originally intended to be a more civilised but still cheap-to-make Ford-engined replacement for the Lotus Seven, until Chapman and his team realised they could simplify the Elite construction process and take the new project more upmarket, while retaining the Ford motive power.

That was the real brilliance of the Elan over the Elite: it perpetuated the earlier car’s fine dynamics, while packaging them in something that was easier to live with and – most crucially – an awful lot cheaper to produce.

The biggest single difference between Elite and Elan was that the newer car had a much simpler fiberglass body, which fitted like a saddle over a separate steel ‘backbone’ chassis. With Y-shaped extensions at either end to support drivetrain and suspension, the central chassis was both light and inexpensive to make. It wasn’t a Lotus innovation, by any means – backbone chassis go right back to the vintage era and beyond – but it was a classic example of Lotus lateral thinking, taking an old idea and reinterpreting it for the modern age.

Other points of cost-driven difference were that the Elan’s steering rack was a Triumph Spitfire part rather than a bespoke one, and the independent suspension was simplified – particularly at the back, where wide A-frames located the rear wheels, instead of using the driveshafts for this job as on the Elite. There were Rotoflex rubber couplings to accommodate rise-and-fall movement between the chassis-mounted diff and the driveshafts.

Roger Putnam, who joined Lotus in 1965 and became head of sales and marketing, remaining there for 17 years (he ended up as chairman of Ford UK in 2004), had a Series 1 Elan as his everyday transport and remembers it well. ‘It was a pretty typical Lotus – probably a bit too basic. Colin [Chapman] had this obsession about stripping everything out. Mine was a 1963 car that had been taken back into stock as part-exchange and I upgraded it to Series 1-1/2 spec.

‘I was driving it near the factory one day when I hit a patch of black ice and spun off into a field. The car ended up on its roof but I was thrown clear and, amazingly, landed on my feet! Just then Colin came along in his Galaxie. He saw me in the field and shouted: “Is that a company car?” “No sir,” I shouted back, “It’s my own.” “F*cking good job!” replied Colin, and drove off…

‘Graham Hill was given an Elan and I remember him ringing me a few days later to tell me in his “forthright” way just how much he hated its Rotoflex couplings. He couldn’t believe Colin had created a car that was so difficult to drive!’

The F1 World Champion was referring to the way the rubber couplings tended to wind themselves up under power. To quote Car again: ‘Any lack of delicacy in throttle or clutch control will set the car leaping about like a circus bronco, whether from a standing start or on the move.’ But this quirk aside, there was little to criticize in the way the Elan drove. It was no faster than the Elite, and on the circuit its handling – in standard form – was less tidy than the earlier car’s. But on the road, in the real world, it went round corners in a way that very few other cars could match.

Where the real progress had been made was in the ride quality. The Elite’s was on the firm side, as befitted a thinly disguised racer. The Elan’s was much softer and more comfortable, yet this had been achieved with no detriment to roadholding. As Setright summed up: ‘The Elan handled very nearly as well as the Elite, and gave a softer ride. In fact, with its smaller wheels and more sophisticated interior, the Elan seemed a softer car altogether than the Elite. The semblance was deceptive…’

Ah yes, that ‘more sophisticated interior’. By today’s standards, the cockpit of Allan Warburton’s Elan S1 looks almost laughably primitive. There is a wood dash, but it has all the elegance of a plywood school desk. No attempt has been made to box in the sides where it descends to the transmission tunnel, so the passenger is treated to a fine view of a bird’s nest of wiring behind the dash. (Then again, maybe that made running repairs a lot easier.)

But the seats are better than the Elite’s, with angled runners that allow short or tall drivers to be equally comfortable, and there are wind-up windows instead of the Elite’s removable side panes. Aside from a locking lid for the glovebox – people did steal things, even in the early ’60s – you don’t notice much missing. Interestingly, however, there’s no radio fitted to Allan’s car, just the original dash blanking plate. It’s the driving that delivers the entertainment.

A lot of that entertainment was thanks to the Ford-based 1600 twin-cam engine, which had an alloy cylinder head designed by Harry Mundy – then technical editor of The Autocar. Being based on the block of the humble Cortina Mk1 helped keep the unit cost down and the reliability up, and it was tractable for a sporting engine, too, having what Autocar described as ‘the pull of a lion from 2000 to 6500rpm in top gear’. Originally the Elan was to be sold with a 1500cc version of this engine, which is how it was marketed on launch in October 1962. A couple of dozen cars were built with the 1500 but production took so long to get underway – the Elite continued to be built well into 1963 – that the 1600 was the model customers received.

The Elan’s bolt-together construction meant that most of the early cars were built at home by their owners to avoid paying the detested Purchase Tax then levied on new cars – or, at least, that’s what they told HM Customs and Excise, since (as the men from the Revenue well knew) there was a flourishing trade in garages assembling Elans in return for cash-in-hand. Peter Rudge, who in the 1960s worked for what would become the (very respectable) London Lotus Centre, reckons he knows why the C&E eventually stopped persecuting Elan buyers.

‘An order to desist came down from the Customs and Excise office in Norwich, which of course is very near the Lotus factory at Hethel – which happened to be a major local employer…’

About 17,000 Elans and Elan +2s were built (one way or another) and today it’s probably the most widely loved of any Lotus model. But its influence is still being felt well outside Lotus circles – as the styling inspiration for the 1989 Mazda MX-5, the best-selling sports car. Ever. 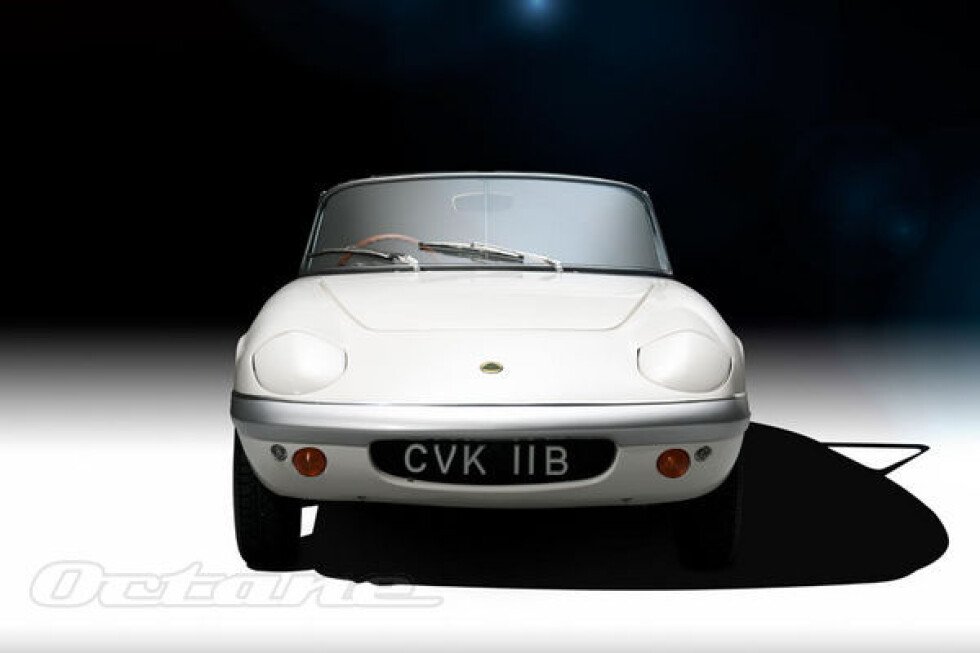