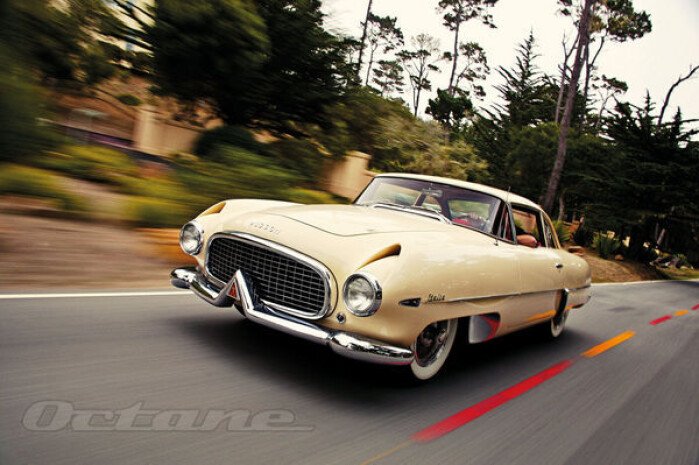 Most of us have a soft spot for the underdog, the small business trying to take on the corporate giants, and in the history of the American automobile they don’t come much runtier than Hudson.  It made some fine cars, which were notable for their quality and durability; it just didn’t capture the public imagination enough to survive when times were hard. Even the name, Hudson, sounds stolid and dull – although, like so many American car makes, it owes that to a founder, in this case the Detroit department store owner who put up the initial stake in 1908.

You can argue forever about just why Hudson went downhill in the years immediately before and after World War Two, but the process was inexorable. Forced to merge with Nash-Kelvinator in 1954 as part of a new company, American Motors (interesting piece of pub trivia: AM’s first president was one George W Romney, father of a certain Mitt Romney), both the Hudson and Nash names had disappeared altogether by 1957, when they were replaced by a new brand, Rambler.

But just a few years earlier Hudson had made a couple of brave attempts to revitalize its flagging image. One was the Hudson Hornet, a radically low-slung saloon whose fine handling made it a NASCAR winner for several years on the trot. The other was less successful but even more dramatic: the Hudson Italia. No prizes for guessing where this car was styled and built – as they say, the clue is in the name.

American car makers indulged in something of a love affair with Italy during the 1950s. Maybe it was a long-standing affection that was merely rekindled by the large number of US servicemen who saw action in Europe during WW2, but the fact is that many of the major car makers had their ‘dream car’ concepts influenced and built by the carrozzerie. Ghia, Pinin Farina and Touring were three of the larger outfits who created cars for the Americans, and it was the last of this trio that Hudson commissioned to build a luxury two-door sedan, based on Hudson’s own ‘compact’ platform, the Jet.

Despite its name, the Jet was an uninspiring car to look at. It’s said that Hudson designer Frank Spring came up with three proposals, of which the last and least attractive was only sketched out for political reasons, to incorporate some styling suggestions made by Hudson’s president, AE Barit, and an influential Chicago dealer called Jim Moran. Of course, that was the one that got approved for production. Barit and Moran wanted something that resembled the new 1952 Ford; but the Jet had been planned out as a much smaller car, and the result was a dumpy, top-heavy and distinctly unsexy vehicle.

It was also expensive. Small cars generate small profits, unless you sell an awful lot of them, but they’re just as costly to develop as bigger models. Hudson lost a huge amount of money on the Jet, which retailed at a considerably higher price than the competition from Ford, Chevrolet and Plymouth. Some 0 of the Jet’s sticker price went to pay its development costs. Fewer than 36,000 Jets were sold in its two production years, 1953 and ’54.

Looks apart, however, the Jet wasn’t a bad car. Like the bigger Hudsons introduced for 1948, it featured ‘step down’ construction, which meant the floorpan was considerably lower than the perimeter chassis, for greater interior room and a lower centre of gravity. It had a flathead straight-six that gave 104bhp in single-carb form, or 114bhp with ‘Twin H-Power’ carburetors and higher-compression cylinder head. Available with a three-speed manual transmission, plus optional overdrive, the basic platform had promise. Road & Track admitted that the Jet made a lot of sense. ‘Demonstrate this car and it will sell itself’, wrote the editor.

It’s been suggested that Hudson commissioned 25 examples of the Italia so that it could homologate it for the Carrera Panamericana. This seems, frankly, unlikely: much more plausible is that Hudson simply wanted a ‘halo’ product that would confer greater desirability on its cooking models.

The first meeting between Hudson and Carrozzeria Touring took place at the 1952 Brussels motor show, according to Touring boss Carlo Felice Bianchi Anderloni. In the 2004 book Il Signor Touring (‘Mister’ Touring), he’s quoted as saying: ‘In a restaurant in the Grande Place, Brussels, at the end of a dinner based on the heavenly shellfish typical of Brussels, a rough agreement to begin to design a body was immortalized, sketch included, on a hotel napkin.’ (It’s amusing to note that Anderloni, being an Italian, recalls what was on the menu that night, some 50 years ago…)

A complete Jet sedan was shipped to Italy, the bodywork torched off, and the prototype Italia coachwork built up on the perimeter chassis, to Touring’s superleggera principle of alloy panels on a tubular frame. According to Il Signor Touring, Anderloni then drove it around for a while, and found that ‘the Hudson’s easy-going behaviour on the road won me over… In Italy, no-one had a car with automatic transmission.’

The only problem with that statement is that the prototype Italia had a manual gearbox with overdrive… It seems very likely that Anderloni (or the journalist who interviewed him) was confusing the Jet-based Italia with the slightly later Hornet-based four-door Italia prototype that Touring also bodied.

A contract for 25 ‘Jet’ Italias was signed in December 1953, but Touring’s craftsmen were nonplussed when a batch of chassis arrived from the USA – as component parts, rather than ready-to-use chassis. Anderloni explained: ‘We managed to convince Pierino Zavatterelli, owner of a small, well-appointed workshop that specialized in fine-tuning sports cars, to become the official assembler in Italy for the Hudson mechanicals. Once completed, the chassis was brought to Touring, where the car, called Hudson Italia, was fitted out in its bodywork, finished and tested, ready for delivery.’

The batch of 25 cars – the one-and-only batch, as it would turn out – arrived in the USA in the autumn of 1954. By then, Hudson was almost finished as a marque: it had already been subsumed into American Motors, and customers for a six-cylinder Hudson that cost more than a Cadillac were hard to find. Ed Souers of the Hudson-Essex-Terraplane Historical Society has restored one Italia, is currently restoring another, and owns the unique four-door. He is reassuringly honest about why  he thinks the Italia was too little, too late:

‘By the time the first cars were ready to ship to the US in August 1954, Hudson was effectively a defunct marque. Many Italias ended up being repainted in colours such as red, and some were re-engined. They tended to be bought by slightly eccentric engineer types rather than famous people.’

Indeed, whereas ‘dream cars’ such as the 1956 Dual-Ghia seemed a natural fit with celebrities – the D-G  was adopted by Frank Sinatra, Ronald Reagan, Desi Arnaz and Dean Martin, among others – the Italia  was ignored by the media types. One example was said to have been bought by Liberace, who had it painted silver and the interior retrimmed in black (all Italias were originally finished in cream, with red and cream interiors), but it now seems that was wishful thinking on the part of a previous owner, and the car has recently been returned to cream.

Although six-cylinder motors were somewhat passe' with a V8-obsessed motoring public by the mid-50s, the Italia certainly looked exotic. Among its unusual stylistic features were doors cut into the roof, to improve access – an idea pioneered by Frank Spring on the 1931 Peerless V16 prototype – while air scoops above the headlights and intakes in the rear wings fed cooling air to the brakes. All four wings were heavily spatted, which helped disguise the narrow track of the Jet chassis, and the Italia’s understated shape was glitzed-up with Borrani wire wheels and triple ‘tailpipes’ in its rear flanks, which actually housed stop-, tail- and reversing lights.

Inside, the Italia was cherry-red bright, with a simple instrument cluster taken straight from the Jet donor car. The front seats, though, were rather special, being ergonomically designed with three densities of rubber foam in bolsters and squabs to support the occupants correctly. There were lap belts, too – almost unheard of in a 1950s American car.

You might actually use those safety belts, because the Italia drives surprisingly well. The car in our photos, which was restored by St Louis, Missouri-based Hyman Ltd Classic Cars, is the third production Italia and is now in concours condition – it took a second-in-class at Pebble Beach in 2011. With not much more than 100bhp to propel it, the Italia is only moderately brisk, but you motor along to the pleasant burble of its 3.3-liter straight-six and it feels relatively wieldy, despite riding as softly as any American sedan. The steering is light and accurate enough, once you’re rolling, and the three-speed column change works well. Sit back in those contoured seats, relax and you’ll find you can make decent progress – although we’re not sure we’d care to tackle the Carrera Panamericana in one.

A remarkable 21 of the 26 Italias built are known to survive: 19 of them in the USA, one in Sweden and one in France (albeit converted to Citroen front-wheel drive). A fully restored example was sold at auction in September 2011, which suggests that Italias are more sought-after now than they were in 1954 – although Hudson vice-president Stuart Baits was later quoted as saying: ‘As I remember, we about broke even on them – I think [the Italia] about paid for itself on the whole deal.’

Most pundits are agreed that the reason for Hudson’s ultimate demise was that it failed to develop a V8 engine, which was what the market wanted. The Italia was never going to be the company’s saviour, despite all the favorable column inches it generated in the press of 1953 and ’54. But at least this underdog went out with something of a bark, rather than a whimper. 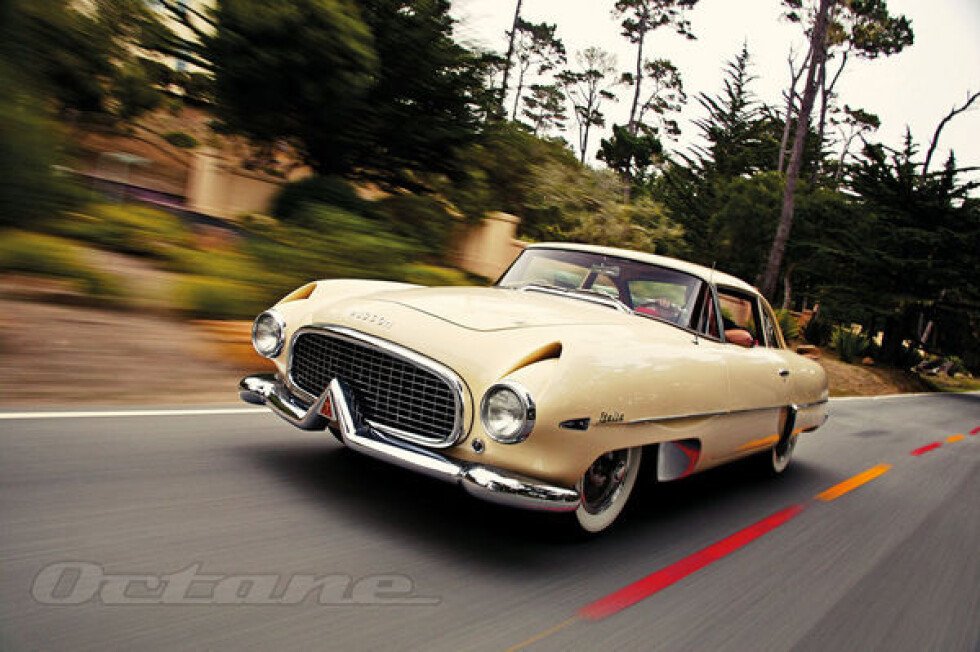