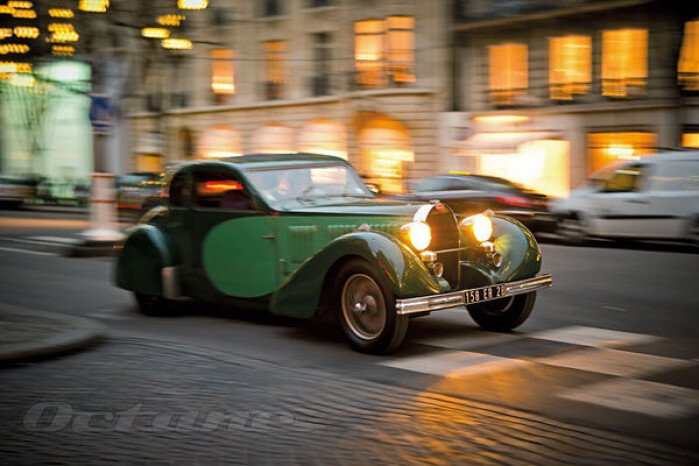 Bugatti was all over the place come the end of the 1920s, producing a mish-mash of exotic and massively expensive motor cars. The ludicrously huge 12,763cc Type 41, known as the Royale, was a flop: Ettore Bugatti managed to shift only three examples to buyers who had sufficient ego. Tellingly, royalty and heads of state politely demurred.

Yet the superb 2.3-liter straight-eight Type 43 Grand Sport introduced in 1927 sold 158 examples, and the much more successful Type 44 saw about 1000 chassis constructed, many sent to coachbuilders for formal coachwork. Then there was the pair of Type 45/47 prototypes with their U16 engines – at least the Type 45 won the Klausenrennen in 1930. The 5.3-liter Type 46 was no race victor and, come the 1929 Wall Street Crash, Bugatti diverted into building the Autorail Automotrice Rapide rail car for the ETAT railway company. Ironically, this large order probably saved Bugatti during the Great Depression.

Ettore’s eldest son Gianroberto Carlo Rembrandt Bugatti, known as Jean, was not as talented as his father when it came to artistic creativity, but he was certainly an equally talented engineer. He is recognised as saving the family firm with the Type 57, regarded as one of the marque’s best models, but died in a car crash on 11 August 1939 behind the wheel of the Le Mans-winning Bugatti, aged only 30. He is credited with the marque’s victories at La Sarthe in 1937 and 1939, and some say the Bugatti era died with him.

Until 1932, the marque had been constructing seven different models – an almost Lancia-esque complication of production engineering. The economic crash led to decreased orders and the bank loans were becoming tighter. Jean Bugatti’s answer was the Type 57, launched at the 1934 Paris motor show. The plan was for various specifications: Type 57; 57S, the S for surbaisse or lowered chassis; 57C denoting compressor; and 57SC for a car with both.

Under Jean’s influence, Molsheim managed to modernise its production programme and take on the might of Delahaye, Delage, Mercedes-Benz and Rolls-Royce. The Type 57 was the first ‘grown-up’, mature Bugatti – a sophisticated and fast road tourer, not a thinly disguised racing car – but nor was it a chauffeur-driven limousine, typified by the Royale or Type 46. Perhaps the first example of an ‘owner driver’ automobile like the Derby Bentley Sportsman saloon? The thinking behind the Type 57 was that the owner could take advantage of France’s fast and open roads, and enjoy such drives as Paris to Monaco in 12 hours.

The Type 57 engine is a robust 3.3-liter straight-eight, with gear-drive double-overhead camshafts fed by a Stromberg carb. Its gearbox is mounted rigidly to the motor. Forward-thinking Jean had developed an independent front suspension for the Type 57, nicknamed the Crème de Menthe. When Ettore heard of this he was apparently furious because it veered too far from his design principles. Consequently, while exhaustively tested on the Type 57A prototype, the set-up was discontinued in favour of the less effective although beautifully shaped solid front axle. The old artist trumped the young engineer…

Some 550 examples of the Type 57 were sold from 1934, and in 1936 the first Type 57C prototype was developed. The car pictured here is that very machine, chassis number 57452. But, as is often the case, the story is slightly more convoluted – and thus intriguing.

During September 1936, in the weeks leading up to the Paris show, the Molsheim works were particularly busy. A Sport 57S was to be making its first appearance at the event as both a roadster and coupe, along with three Ventoux models, one fitted with a supercharged Type 57C-spec engine. The Registre des Carrosseries indicates that the prototype 57C and the first SC left the coachbuilder on 3 October 1936, chassis number 57452 finished in red (Retail Red!) with tobacco leather interior. Chassis number 57453 was painted black and had fabric trim.

The next day, Bugatti test driver and French Grand Prix winner Jules Goux drove the red Ventoux with engine number 1C to the Bugatti showrooms at 46 Avenue Montaigne in Paris, accompanied by Jean Bugatti in the 57SC. The cars were prepared for demonstration work for the weeks ahead. They would be driven by Bugatti and the man who ran the showrooms, Grand Prix winner Robert Benoist, who was later executed for being part of the British Special Operations Executive and French Resistance in World War Two.

After the Paris motor show, the Ventoux stayed on at the showrooms as a demonstrator. Externally it resembled a standard four-seat coupe, but its prototype supercharged engine upped the standard 57’s output of 135bhp to some 175bhp. Benoist and test driver Pierre Veyron (also a racing driver, engineer and war hero) continued to drive the Ventoux around Paris, and records show that in spring 1937 the car was renumbered as chassis 57308 and given the registration 4834 NV3. It was not the only Bugatti to boast this registration.

In October 1936 the Ventoux was sold to its first owner, the young Compte Aymar de La Rochefoucauld, wearing number 6196 NV3. The Bugatti appears to have remained in Paris, at Place des Vosges, until 1955. In 1961 it went to Suresnes, the location of Hispano-Suiza and Bugatti specialist Garage de Gaston Garino, and from there it was traced to Belgium. In 1973 the Ventoux was sent to Bugatti specialist Lucien Wurmser in Molsheim for restoration. By now, it was painted two-tone green.

By 1977 the chassis had been over-stamped with the incorrect number 57557, which is for an Atalante that resides in the US, and the Bugatti was to lose its original dash, firewall and supercharger. However, a November 2011 inspection by the Artcurial auction team unearthed some encouraging evidence.

The hood is stamped with number 26, which indicates the body was built around 1936. Importantly, the rear axle carries number 334 – as does the gearbox, which also has C1 etched on its cover. In addition, the left rear side of the engine is stamped number 1 and, although the chassis incorrectly reads 57557, the numbers 308 are visible underneath. Bugatti records indicate the modification of the car to a 57C with engine number 1 and that the car carried chassis plate 57452 and then 57308. Hmm, a riddle wrapped in an enigma inside a mystery?

Bugatti historian and author Julius Kruta says: ‘This Ventoux is fascinating, and it is an important car. It appears to have a very interesting history, even if the over-stamped numbers might not appeal to some collectors. The green paint is not original and the correct dashboard needs to be refitted, while it is a pity it lost its blower so recently. It is well recorded in the books as car number 57452/57308.’

He ponders from an historian’s viewpoint: ‘The big question is, should you restore it or leave it as is? I rate this Bugatti highly, especially if it is returned to its original monotone colour and a supercharger is refitted.’

Kermit-the-Frog-green paintwork aside, this is indeed a lovely, patinated and attractive car. And the provenance of it being the first prototype supercharged Type 57C as driven by most of the Bugatti greats really adds to the mystique. Drivers Robert Benoist and Pierre Veyron were not only Grand Prix winners, they were war heroes, too.

On this freezing December evening, we are in Paris with the vintage Bugatti. Georges Haussmann’s magnificent cityscape takes on a spectacular presence once the commuter traffic has died down, the orange lights are lit and the wide boulevards are quiet. And we are not in just any old part of Paris. Mais non, we are on the grand Avenue Montaigne, off the Champs-Ήlysees in the swanky 8th Arrondissement. This is the veritable home of Bugatti; the marque’s showrooms were located at number 46 in the 1930s. And we are here to drive the Ventoux.

The Bugatti looks mellow, but is straight and solid. Its paintwork has aged, and opening the suicide door reveals the deliciously aromatic tobacco hide trim set off by the light-coloured dash, Jaeger instruments and high-mounted, wood-rimmed, four-spoke steering wheel. The seating is sit-up-and-beg, and that big wheel is close. After sliding the protruding ignition lever to retard, upping the revs on the idle lever a tad, and twisting then pushing the central starter key, a deep, slow whirr emanates from under the floorboards as the starter motor engages and then ignites the engine. It lives!

The wet-sump and no-longer-supercharged 3.3-liter engine needs a moment to warm through, then settles to a contented idle. The short-travel clutch is shoved down to the carpet and, with a huge swing from left to right, the long, mid-mounted shifter is encouraged to find first. That slow-revving engine has enough torque to move the Ventoux off the line without protest, and as the revs rise the growl does, too. Don’t rush the changes: with familiarisation gears can be selected promptly without the need for a double-declutch on the way up, at least.

Being an early Type 57, this example has the gearbox solidly mounted to the engine and does without the later damped mounts. Consequently, you can feel the straight-eight’s vitality fizzing through the chassis, up through your feet and into your fingers via the wheel.

No, I am not going to pretend to do a speed trial around the Place Vendôme, nor do we get the car fully sideways around Place de la Concorde. However, motoring brusquely along Quai des Tuileries, the Bugatti’s thoroughbred nature quickly becomes apparent. With plenty of power, superb steering and a balanced chassis, we’re soon threading through the capital at speed and with confidence. The only caveat is the cable-operated brakes, which pull all over the place and don’t really do much at all. But that can be rectified by proper adjustment or an upgrade to a Type 57C hydraulic system, which has proved to be superb on previously driven Bugattis of this ilk.

Headlights illuminating the cobbled boulevards ahead; then roaring through the tunnels of Paris next to the majestic Seine; the aristocratic bark of the eight-cylinder, Grand Prix-proven engine… this Bugatti experience is special indeed. The car’s sharpness belies its vintage and it behaves impeccably. With the comfortable interior cosying up nicely, the engine lugs contentedly until the roads clear, then it’s down with the curious little roller throttle pedal. The Ventoux reacts like a frisky colt! To imagine Bugatti, Benoist, Goux and Veyron blasting through 1930s late-night Paris on the eve of World War Two just adds to the enigma of this Type 57 – and to hell with the chassis numbers!

Thanks to Artcurial Motorcars, www.artcurial.com/motorcars. 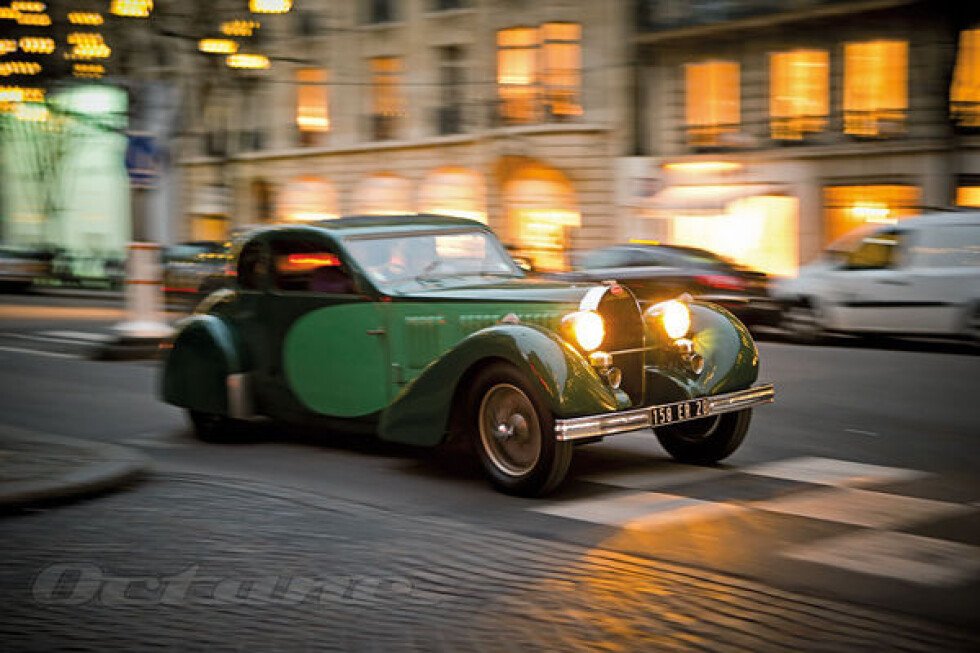