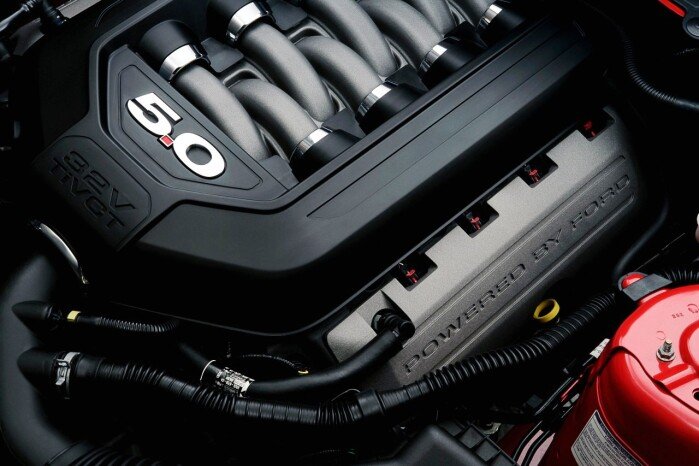 The Ford Mustang is more than the sum of its nuts and bolts, but the engines that have driven over the last half-century have unquestionably helped shape its character. We’ve drawn up a short list of the 10 engines that made the largest contributions to the car’s performance.

Introduced initially in the Fairlane, the 289 “HiPo” engine known by its “K” engine code was the Mustang’s first high-performance engine. It was stronger all around, with thicker main bearing caps, stronger connecting rods and a high-nodularity crankshaft. It also used a solid-lifter camshaft, Autolite four-barrel carb, dual-point mechanical-advance distributor and higher-flowing exhaust manifolds to produce 271 hp at a lofty (for its day) 6,000 rpm. The rest of the Mustang’s drivetrain was beefed up to handle the power, too. And figuring customers would make the most of its capability, the engine warranty was reduced from the normal two years to only four months.

Ford’s midsize FE engine family enabled the Mustang to use a larger-displacement power plant without resorting to the impractical step of shoehorning in the much-heavier, larger-dimension MEL-family big-block. It was not a new engine when it was offered in the 1967 Mustang, but its inherent torque gave the relatively lightweight car some serious spring in its step. It was rated at 320 hp in 1967 and two versions were offered in ’68 – including a 325-hp version for the GT. Frank Bullitt drove a 390-powered Mustang through the streets of San Francisco, so ‘nuff said.

Not everyone was thrilled with the 390 engine, including influential dealer and drag racer Bob Tasca, who installed a 428 Police Interceptor engine in his Mustang. It was the spark of an idea that led to the development of the Cobra Jet engine, which built on the police-engine foundation with a stronger rotating assembly, unique heads and intake manifold, and a larger carburetor. The horsepower rating was officially tagged at 335, but the engine realistically made more than 400 hp.

Developed to make the Mustang competitive for the SCCA Trans-Am road racing series, while meeting class engine-displacement guidelines, the Boss 302 was an artisan engine, using the best ingredients in Ford’s mechanical garden. Its foundation was the Windsor block (with four-bolt mains) and used Cleveland heads with a staggered valve design. A solid-lifter camshaft topped off the package, which was conservatively rated at 290 horsepower – and even included a factory rev limiter to keep the G-code engine from zooming past 6,150 rpm.

After the peak of the muscle car market in 1970, engine performance took an immediate and precipitous drop, but the Q-code 351 Cleveland engine – also known as the 351 Cobra Jet – soldiered on with strong power that kept the Mustang at the top of the admittedly dwindling list of factory performers. It had lower compression, but breathed through open-chamber 4-V heads and used a high-lift, hydraulic camshaft. It was rated at 280 hp in 1971 and 266 hp in 1972 and ’73 – and each delivered strong torque, too.

Ford flirted with turbocharging the Fox Mustang from the very beginning, including carbureted and non-intercooled EFI versions of the stalwart 2.3L four, but it was the intercooled version introduced on the 1984 Mustang SVO that truly gave enthusiasts a V-8 alternative. In fact, its 175-hp output matched the carbureted 5.0L V-8 that year. Output climbed as high as 205 hp by mid-1985, proving the Mustang performed great under pressure.

The engine that launched a performance industry: When Ford added better-breathing “E7” cylinder heads to the tough-as-nails 5.0L Windsor short block for 1987, an instant classic was born. Although its 225-hp rating seems mild today, the 5.0 was big news more than 25 years ago, converting even diehard Chevy fans and triggering a new performance genre – so much so, you’d think the Motorsports B303 camshaft was a factory option.

The 281-cubic-inch (4.6L) OHC Modular V-8 engine that debuted in the 1996 Mustang GT did not exactly generate the power or torque that made enthusiasts recall the good-old muscle car days – or even the 5.0L Windsor days, for that matter. That changed with the 2003-04 Cobra (nicknamed Terminator by its engineers), which featured an Eaton supercharger to help produce 390 serious horsepower. It wasn’t merely a simple bolt-on, either. The standard aluminum block was changed for a stronger iron block, and forged pistons and Manley H-beam rods were used in the rotating assembly. The engine renewed the Mustang’s performance and set the stage for greater things to come.

The Mustang’s 2011 introduction of the 5.0 4V TiVCT V-8 engine – known to enthusiasts as the Coyote 5.0L – took the performance to a world-class level upon its 2011-model-year introduction. With its larger displacement and advanced technologies, including continuously variable valve timing, this DOHC masterpiece sings to 7,000 rpm, producing 420 horsepower and 390 lb.-ft. of torque along the way. This new 5.0L immediately had the Mustang GT compared favorably against the comparably sized BMW M3, with many critics finding the Mustang a better choice for the money.

The number: 662 horsepower. Wow. It’s not only the most powerful production Mustang ever produced, in the Shelby GT500, it’s the most powerful production V-8 in the industry. The 5.8L engine is fed a steady diet of pressurized air, delivering by Eaton’s 2.3L, four-lobe, high-helix supercharger – all with daily-driver refinement. Most. Powerful. Ever. What else do we have to say?


The K-code 289 was a true high-performance engine, with a beefier bottom end, heads with screw-in rocker studs and a 600-cfm four-barrel Autolite carburetor.

The 390 was part of Ford’s FE (Ford-Edsel) midsize engine family, originally slotted between the smaller Windsor and the MEL (Mercury-Edsel-Lincoln) large engine family. Although not a true big block, it was still a tight fit in the Mustang engine compartment.

The 428 Cobra Jet and, later, the Super Cobra Jet, were the result of dealer/racer Bob Tasca wanting more than what the 390 could deliver. He started with a 428 Police Interceptor engine and Ford picked it up from there.

Shelby was an early adopter of the 428 Cobra Jet, but in some of the earliest models installed in Shelby Mustangs were in fact Police Interceptor engines, because the Cobra Jet wasn’t yet certified.

The Boss 302 engine gets its unique look from the Cleveland cylinder heads used on it. Horsepower was underrated at 290.

For 1970, the Boss 302 was revised with smaller intake valves and, at a glance, aluminum valve covers replaced the chrome covers used in 1969.

An important component of the Boss 302 package was an engine compartment-mounted rev limiter, which kept the free-revving Windsor-Cleveland hybrid engine to 6150 rpm.

As the muscle car ear wound down, the Q-code 351 Cobra Jet kept the Mustang a respectable performer from 1971-73.

The 1984 Mustang SVO introduced a new world of technologically advanced high-performance, balancing a turbocharged engine with features not available on even the V-8-powered GT, including four-wheel disc brakes and 16-inch/five-lug wheels.

The turbocharged and intercooled 2.3-liter four-cylinder in the 1984 Mustang SVO generated about 14 pounds of boost, to give the engine 175 horsepower – the same rating that year as the 5.0-liter V-8 in the Mustang GT.

The 5.0-liter V-8 had made the Mustang a top performer since it was “reborn” in the 1982 GT, but it took on new life in 1987 when the second-year port-injected engine added better cylinder heads, resulting in 225 hp. In the lightweight LX models, it made for a great power-to-weight balance.

Starting in 1987, E7TE-code cylinder heads from Ford’s truck engines replaced low-performing swirl-port heads used only on the 1986 EFI engine, helping bump the 5.0-liter’s output to 225 horsepower. A roller-type camshaft and durable forged pistons were also part of the package.

The highest-performance 5.0-liter offered in the Mustang was the 1993 Cobra engine, which used Ford’s GT40 cylinder heads and intake manifold, along with a unique camshaft profile, bumping horsepower to 235 and torque to 280 lb.-ft.

Found in the 2003-04 “Terminator” Mustang Cobra, the supercharged 4.6L engine used a durable iron cylinder block in place of the GT’s aluminum block, along with other specialty parts – including an Eaton M112 supercharger – to produce 390 hp.

The 5.0-liter TiVCT “Coyote” engine introduced in the 2011 Mustang GT greatly expanded the performance envelope of the Modular engine family, thanks in large part to continuously variable valve timing that helped the engine produce more low rpm torque and sustain horsepower higher in the rpm band. Originally rated at 412 hp, it now is rated at 420 hp in the 2014 Mustang GT.

The most powerful production engine ever offered in a Mustang is the 662-hp, supercharged monster introduced in the 2013 Shelby GT500. It uses the Eaton TVS supercharger on a 5.4-liter short block to outgun even Chevy’s dearly departed Corvette ZR1. 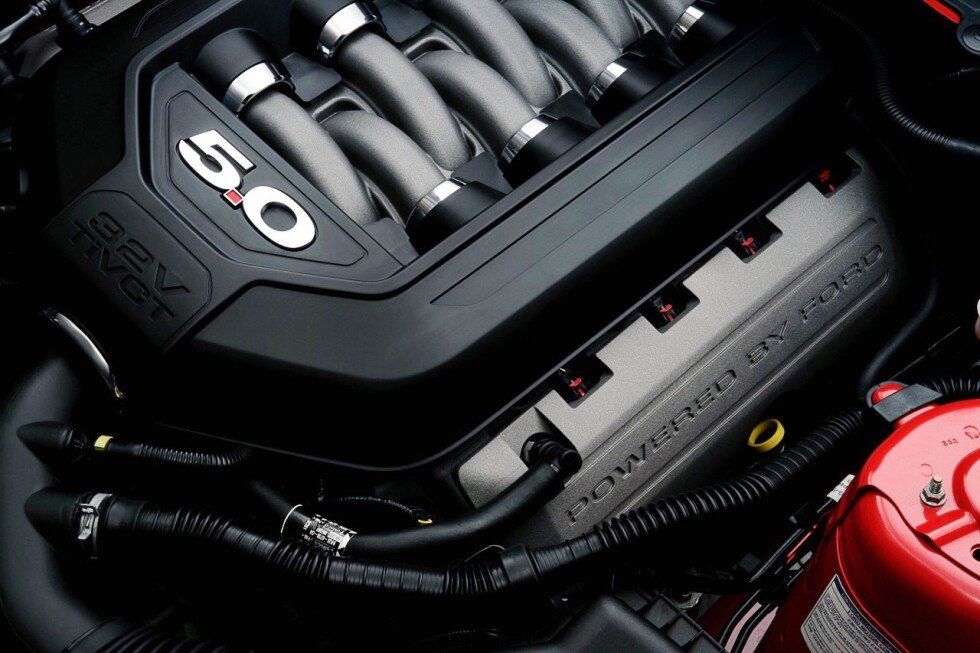